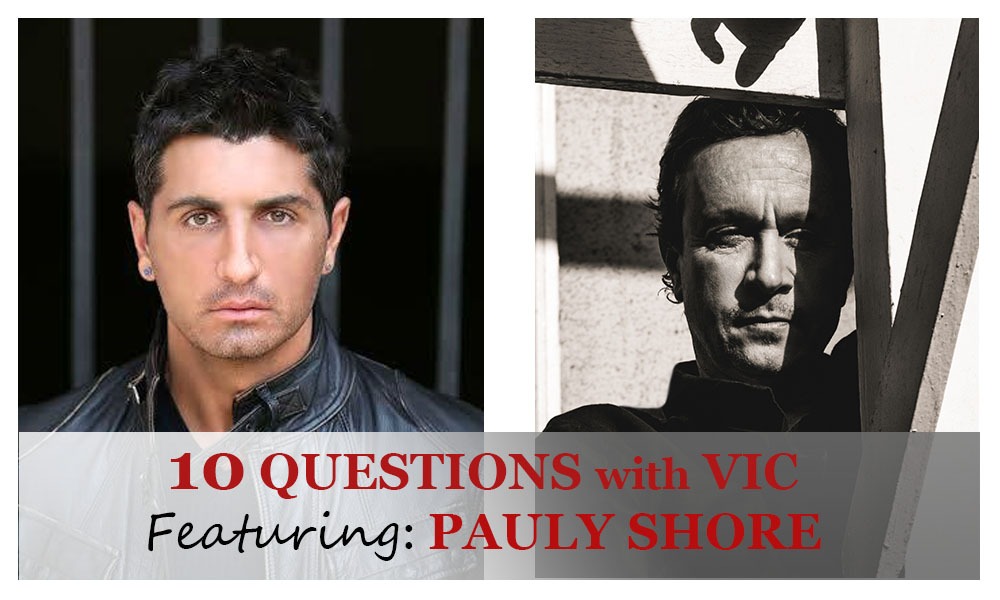 Pauly Shore first came to our consciousness with his popular MTV show “Totally Pauly”, which led to numerous TV and film roles such as “Jury Duty,” “In the Army Now,” “Bio Dome,”, “Encino Man,” “Son In Law,” and “The Goofy Movie.” After several successful albums, “The Future of America,” and “Scraps from the Future” and producing his projects, “Pauly Shore is Dead”, “Vegas is My Oyster,” and “Pauly-Tics”, Pauly released “Pauly Shore Stands Alone,” a true-life road documentary that follows him on his tour. In addition to a busy tour schedule and his own podcast, Pauly recently wrote, produced and director a short film, Sin City Psycho, and chatted with me about his plans for the film.

I have to say that I affected a generation. You know, I have to say that in the 90s, I was someone that made his mark, throughout my films, my stand-up, MTV, my albums and all that stuff I really kind of like hit a nerve. To this day, I get parents turning their kids on to my movies. If you go on my Instagram, there are some kids dressing like a Halloween. It’s cool.

Your successful and versatile career has included your own show on MTV, many hit studio films, co-hosting talk shows and you have been touring across the country with your stand-up show. What do people associate you with most?

How was it growing up in comedy dynasty with both parents in the business?

You are well-known as a comedic actor and a stand-up comic, but your new short film, “Sin City Psycho” is a dramatic change. What made you decide to write and direct this project?

I’m kind of tired doing comedy, I’ve done comedy for so long, all my sketches are comedic and to tell you truth, I started acting before I started doing comedy, I just miss acting, and since I haven’t been getting the roles, the right roles or anything that excites me coming my way, because of the way the world is now with these videos, I can get my load out and in 10 minutes and get everything I needed emotionally out, and the premise is just an idea I had a while ago, playing a psychopath is an awesome role for any actor because he can be crazy without getting in any trouble.

Tell me about your fans when they see you in public.

It depends on where my head space is, I mean if I’m taking a piss, eating a sandwich or talking to a girl you know, I don’t care what they say to you, but if I’m by myself or walking or at the airport or that’s fine, I definitely don’t like to be grabbed, a lot of people grab me all the time, because they love me, they want to hug me, I’m like wow bro, back-off, back-off.

You were a frequent guest at the Playboy Mansion. Do you miss that era?

Yeah, it was a point in time, an era in time, I was lucky enough to go up there for 20 years, I was a guest of Hugh Kefner, he always invited me, and when I was in town, I always attended, especially early on it was pretty cool, it was like Vegas times 10, it was all women, you can be yourself, there was nice food and drinks, and everyone was kinda scantily clad dressed, you know what I mean.

Who are some comedians that you admire?

I wouldn’t say the younger guys, I’m not really tune into them right now, I have guys that open for me think are really funny, I like to bring guys with me on the road that are very strong, I mean you wouldn’t know any of the people if I mention their names, they are just younger comics that I’m grooming, I bring them out then and I teach them and I give them a big audience and their confidence gets a lot stronger and they start to develop. There are a lot of guys that open for me that are very successful now.

Parkinson’s, I was working with Michael J Fox’s company for a while on that because of my mom had Parkinson’s, so it was kind of part of my DNA and that world, it such a fucked up disease, on my God, but I want to definitely get to get involved with some more stuff you know

Aside from promoting Sin City Psycho, what other project(s) do you have coming up?

I have two documentaries in the can, one of them is called, Stand Alone, it’s a six-part series and then the other one is a historical documentary which is like 60s 70s and 80s, and they are in the can, I haven’t sold them yet, they are just kind of idling in the background, I got a studio in my office so I’m going to be doing like short form videos, kinda live which is pretty cool, kind of like Saturday Night Live where we go like once a week, with a new couple of sketches, just put it on TouTube,  I also have a podcast called, Random Rants, which is doing well for me, I like that, which me straight to the fans you know.

I like to get colonics! I’m getting one on Tuesday!

THOM SENZEE’S ALL OUT AMERICA FILM REVIEW: “THE MARRIAGE”