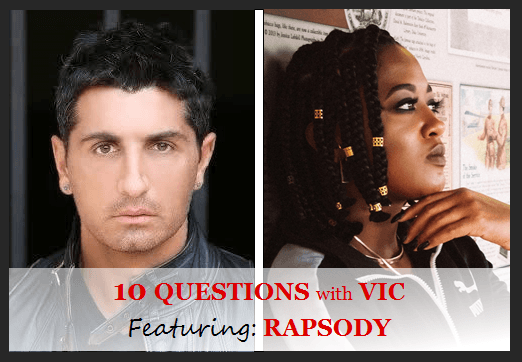 Rapsody is a tour de force in hip hop, blazing the trail for a new generation of emcees, showcasing effortless lyrical mastery in celebrating the culture of a hip hop. But this Grammy Award nominee represents much more than just the female side of hip hop culture; she is an emcee who represents hip hop culture beyond the lines of gender, proving that anything the boys can do, she can do too, and better. Her virtuosity and dexterity behind the microphone highlight her presentation, and her humble demeanor attests to her constant pursuit of improvement with every beat and rhyme. I was thrilled to have the opportunity to interview her during her very busy schedule.

A lyrical alien, tomboy feminine black woman with a lot of soul and machine gun funk.

You are the only woman ever nominated for a Grammy Award in the Best Rap Album category. You were named one of the top female artists to know by both TIME Magazine and USA Today, as well as named one of the 20 Greatest Female Rappers of All Time by XXL. How do you reflect on those honors, as well as others?

Well, I can’t say that I’m the only woman ever nominated for Best Rap Album in the Grammys, but I am one of 5 (now 6 if we included Cardi B’s most recent nomination).  It’s gratifying to work so hard and be acknowledged for years and years of practice, growth, talent, art. I appreciate those flowers as reminders that I’m enough as I am, and my flowers to the world through my music are received and noticed.  However, it also pushes me to keep growing and do more. I don’t want to just be boxed in as one of the greatest women to do anything; I wanted to be one of the greatest across all boxes. I want to help open and widen doors for the girls/women coming behind me in the same way so many women have done before me.  One of my mantras has always been “anything the boys can do, we can do just as well if not better than”.

Along with many other accolades, your music is sometimes described to have intricate rhyme patterns, metaphors, and wordplay. Does texturing and layering music come naturally to you or do you have a particular process?

That’s natural for me.  I’ve always been a fan of wordplay and I was intrigued at an early age with the power of words; and all the ways you could use the words in Hip Hop.  When listening to my favorite artist growing up it was amazing the ideas they were able to convey in just two bars of a song. By setting up the words, and using metaphors you could put some of the densest thoughts into ten lines.  That’s genius. I looked at it like a puzzle. I’m a huge fan of thriller movies that have twist and set you up for the big “AH HA” moment that you didn’t see coming. The twist. That’s the kind of lyricism I have always loved. The set up. Connecting words 4 bars from the last time you said it.  I feel in love with that creativity. Learning how to be complex and simple at the same time. To say things like no one else would think to say them.

Both rap and hip hop are used when describing your work. Do you have a preference? Why or why not?

Hip Hop is a culture. That’s something I live. Rap is something I do within Hip Hop.  It’s an element of the culture.

How do you adjust to the fast-changing realities of the music industry and how business is conducted?

I came in prepared because I was groomed and educated by both 9th Wonder and Young Guru on the business. So, most of the time I knew what to expect or how to react to different situations.  They told me what to look for, what to watch out for, the things to do to keep my sanity, they gave me all the tools I need for the good fight. To run the marathon.

So, having that as a foundation and taking emotion out of anything it hasn’t been a hard adjustment.  It’s knowing the difference between the culture of Hip Hop and the BUSINESS of Hip Hop. Once you understand that difference, have defined your boundaries, know what you want out of the business, and define what success means to you it’s easier to navigate. That’s not to say it easy, but easier to work towards what it is you’re trying to accomplish.  And not being afraid to say “no” or walk away from money.

The business is very political.  The best thing I did was start indie to learn the ins and outs on a smaller scale of having a hand in all moving parts of my art.  And understanding at the end of the day, I am the captain of my own ship. Patience and communication is everything.

What advice do you have for young women rappers starting out their career?

There’s so much I would tell them.  First and foremost, that they are enough.  They don’t have to be copycat versions of anyone else.  There unique self and light is bright enough. So, to always remain true to self and mostly importantly aligned themselves with people you believe in THEM, their vision, and their art.

If you start out trying to follow a trend, you will be chasing trends forever and eventually burn out.  You can be better version of anyone else. You can always be the best version of yourself ever. So, do something that can be recreate because it’s exclusive to you.

To never let anyone box them in because of their gender.  Our gender is a power we possess but it is not all of who we are.  We are limitless in what we can do, create, and become. So, embrace your womanhood however that looks to you but measure you’re potential and greatness across the board; demand that respect.

When I’m not traveling for tours, festivals, interviews, meetings etc. My normal day to day is waking up around 8am.  I’ll pull out my laptop and check all my emails, touch base with my Jamla team on any day to day things we are all working on, then I usually start working on new music, run errands, hit the gym, etc.

Then I’m at our home base, Bright Lady Studios, by around 4pm.  The rest of the evening is spent in the studio until the wee hours of the morning, or sometimes I spend the night, or I’ll go home around midnight and work from home.  I have a studio to work at my residence.

That’s a normal Rapsody day.  If I’m not working on my own project, we are all working one of our other artist’s projects and making sure recording, marketing ideas, branding etc taken are care of.  And, I may make time to throw a spades game in every now and again.

Our new JAMLA IS THE SQUAD 2 album is different on my playlist, mixed with a bunch of new artist and new released I’m in love with.  Leikeli 47’s new album ACRYLIC is a favorite of the year. She has a song titled “Top Down” that I run several times a day. My RocNation labelmate Nicole Bus released a new single titled ‘YOU” that is a jam! Amazing record.  I’m also diggin’ on TDE’s Reason’s new project and JID’s Strawberry song from his latest project is dope. Mereba has a song called BLACK TRUCK that gets heavy fun on my drives. As well as a new singer 9th put me by the name of Mac Ayres.  His SOMETHING TO FEEL album is crazy. And, I’m still listening to Sir’s November. Meek Mill’s CHAMPIONS project is dope and we all are still blown by the Jay-Z verse on FREE. As you can see, I’m into a lot of R&B this year.

My favorite charity is Black Girls Rock.  I’m particularly drawn to anything that uplifts our youth, especially young black girls.  It’s an amazing organization created by Beverly Bond that educates, empowers, and celebrates our girls.

The youth, boys and girls, are our future and it’s important to expose them to limitless possibilities so they know their worth, that they matter, are prepared for the world, and can do anything they dream.

I have to start with my foundation, and that’s my mother and father.  I’ve learned so much from them about womanhood, sisterhood, work ethic, and family.  They were my first examples of strength, power and love.

Then there are women like Phylicia Rashad, Cicley Tyson, Nikki Giovanni, Queen Latifah, Lauryn Hill and MC Lyte that I look up to.  Phylicia and Cicley taught me, outside of my women in my family, how to be classy, regal, carry myself with respect, be gracious, poetic and strong.  They were POWERFUL examples of the light I wanted to walk in and being a strong black woman. They were real Queens, in the same way my mother and aunts were.

Nikki Giovanni showed me how to portray in written form. How to use my voice through words. Latifah, Lauryn and Lyte taught me what that looked like in Hip Hop.  How to shine through all the masculinity and be a undeniable force.

RABBI DANIEL COHEN: SMALL ACTS OF GENEROSITY CAN HAVE A HUGE IMPACT BROADWAY’S ‘A NIGHT WITH JANIS JOPLIN’ PREMIERS ON BROADWAY HD