Inequality, injustice, harassment, repeated attacks, and homophobia have been frequent, even daily occurrences in Azerbaijan for years.

Unfortunately, members of Azerbaijan’s LGBTQ+ community suffer from all of the above. Every day is a new day that the members of this country’s LGBTQ+ community open their eyes to the world with another life-threatening problem. LBTBQ+ individuals experience economic challenges intentionally designed by the government.

For many queer Azerbaijani’s, profound and constant anxiety caused by relentless social problems is a part of everyday life in this country. Living within a society that makes people of diverse gender and sexual orientations wonder daily, “Who is the next victim among us?” is not easy.

Even as Azerbaijan’s entire queer community faces each day thinking in this way, the government of Azerbaijan still does not take any action to improve the untenable situation. Instead, police refuse to investigate, the ombudsman turns away the those seeking help, causing LGBTQ+ stay silent about deaths.

Certainly, Azerbaijan — the state — is the culprit here

What happens in Azerbaijan

Considering the fact that Azerbaijan’s LGBTQ+ community is modest in size, it’s worth noting its members faithfully come together to protect one another from violent homophobic attacks, bullies, harassment, and so on. Azerbaijan’s LGBTQ+ people can be counted on to consistently do much to support each other economically and morally. Even during last summer’s Pride Month, LGBTQ+phobic attacks were happening in Azerbaijan.

Sadly, there is no shortage of examples. These are the most well-know:

In Azerbaijan, 2021’s Pride Month traumas started at 3 a.m., May 29. A trans man was attacked, severely injured, and ended up in the hospital. Eventually, he had to leave his home because of the violence from his family.

Next, on May 31, two people on the street began harassing another queer person in Baku, the Azeri capital city. First, the queer person immediately tried to leave the area. However, the harassers pulled off their shirts began assaulting them. Very soon after the attackers began unleashing their bigotry-driven brutality, the queer person was hit in the arm with a wine opener. Our friend lost their balance and fell to the ground. The attackers fled the area; their identities could not be determined because their faces were covered by masks.

And again, on June 6, the queer friend who was attacked with a wine opener was not alone in being the target of Pride Month hostilities. Just a few days after the harrowing assault, their roommate was attacked by their neighbors in the house they rented. The perpetrators in this instance of homophobic bullying pressured the subject of their hate to get out of the neighborhood. They threatened to stab them if they came back. Their belongings were left at home, and they had to spend days and nights at a friend’s house. “Their lifestyles are disturbing our children; and mothers are worried,” the bullying neighbors said. However, police intervened after the matter was made public on social media.

Then, on June 5, a gay man was followed to his home and harassed and threatened. In fact, he says that if he hadn’t rushed into the house, the phobic person would have been able to hurt him. Indeed, this friend was beaten by a homophobic man while walking down the street with one of his friends last year. Instead of finding the perpetrator, the police asked our friend, “Why is your body like a girl?” The police didn’t conduct any investigations. 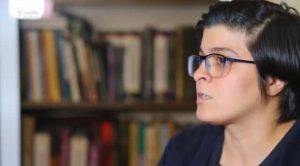 Rabiya Mammadova, an activist, feminist, and lawyer, was attacked by someone who used their car as a weapon of terror because of her political activities. The assailant insulted her by calling her a “lesbian” and “whore.”

On June 10, three trans women living near a cinema in Baku were beaten and evicted from their homes. They were evacuated by the police. One of the women had recently been attacked—in fact the first attack happened the day before: on June 9. Their belongings and money were left at home. They went to the Ombudsman’s office to protest, but “we don’t admit complaints about LGBTQ+s,” the ombudsman said, and didn’t even allow the women’s complaints to at least be taken so that a record of the tragedy would exist.

On the night of June, a trans woman working as a sex worker in Baku was attacked by a person who called her a “customer.” She went to the hospital injured but was not allowed in.

Hotel staff had kicked her out by pushing her down a flight of stairs. Although the victim went to the hospital, she was not admitted because she was trans. Instead, she was transferred to another hospital, where she was also refused admission and, once again, was transferred to another hospital. The victim later filed a complaint to the Ministry of Health. An ambulance attendant refused to treat the woman and complained to police accusing the trans woman of “spreading prostitution.” The ambulance worker said he was “disgusted” with the trans person.

The assailant was later taken into custody, but there were no reports of what happened to the ambulance worker or hotel staff. The victim has a fractured skull according to the first medical checks. An interviewed queer activist named Ali Malikov says that, “We all are trying not to leave each other alone on the streets; not to walk alone; not to enter houses alone. When I walk into the neighborhood I’ve lived in for the last two weeks, they try to block my way, insult me, bully me.”

What has happened in Azerbaijan recently?

On February 22, 2022, at about 4 pm, one of the best-known LGBTQ+ rights defenders and journalist Avaz Hafizli was murdered by his 24-year-old cousin, Amrulla Gulaliyev. According to the investigations, Gulaliyev was drunk at the time of the incident, and in his testimony, he said that he committed the crime because of a personal dispute with Hafizli.

A colleague of Avaz Hafizli, Teymur Karimov reported that when he arrived police were already in front of his house. At the same time, police were refusing to touch his body, indeed calling it “dirty”. ‘Avaz’s body was put in a trash car. Later, his friends and journalists arrived at the scene and sent it to the morgue department of the Sabunchu District hospital’, Karimov recalled.

Avaz Hafizli worked for Kanal 13, an online news magazine. In addition, he was well-known for his queer activism. He made news this past September when he chained himself to the gates of the Prosecutor General’s Office to protest government inactivity in response to popular Instagrammer Sevinj Huseynova’s homophobic incitement.

Avaz repeatedly campaigned on his own for queer people, even unfurling a rainbow flag in front of the presidential administration in a country where homophobic zeal prevails. Perhaps he always found strength in telling himself that nothing would happen to him.

In Azerbaijan, the state remains too weak to respect human death and life. In the capacities as officers trusted with power and responsibility for the public’s safety, Azeri police — who refused to touch Avaz’s dead body because it was “dirty” — have long leveraged fear to subjugate the very people who need them most. LGBTQ+ Azerbaijani’s, like anyone else, need the police equally protect and respect all people—especially those who are most vulnerable.

Avaz was targeted by the long established, violent queerphobic system in Azerbaijan to incite panic among the queer community. And yet Azeri society did not stay silent when shocking images of his dead body became known. Some of those who applauded his death were the same people who inundated him with fevered hate while he was still alive.

Violent systems are always a concern for communities fighting for their freedom. Queer activist Ali Malikov says that Avaz was immortal in the eyes of the queer community in Azerbaijan thanks to the materials he had created and his drive to protest, and his passing has created a vacuum that will be difficult to fill. 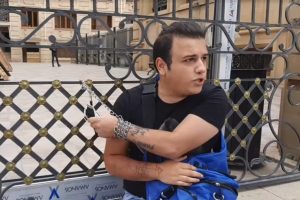 In the last seven years, Azerbaijan has ranked lowest among 49 European countries in terms of LGBTQ+ rights. The country’s culture of LGBTIQ+phobia and its biased, anti-LGBTQ+ political system is to blame for the recent attacks.

Hope never dies for the LGBTQ+ community in Azerbaijan. All the attacks, harassment, bullies, and unfortunately deaths, feed the fires of passion for growing the community of LGBTQ+ Azerbaijani people who decide to overcome the threatening society in which they live to be open members of our community. To be sure this society, with its brutal outlook on queer folks, literally threatens LGBTQ+ individuals very existence.

The community’s mutual help and support are equipping its members to make people understand their power. Society understands that the LGBTQ+ community does not tolerate oppression, violence, and persecution. It is now accepted that they will not give their space, their home, their bodies, their identities — nothing that they possess — to the state, the police, the family.

LGBTQ+ phobia and the political system are the unseen force behind each of the recent attacks. If a country’s president declares, “In Europe, men are no different from women,” that government is far from blameless. If, despite the phobic attacks, no action is taken; if the police defend the violent —and if the attacks continue today — these attacks are no longer random.

Ali Malikov is an queer activist and blogger. He is also one of the founders of the feminist-queer platform 'Femkulis'.
‘White Party’ Returns to Palm Springs Artsakh and Italian Masters’ Clothing Line Collaboration Goes on Auction