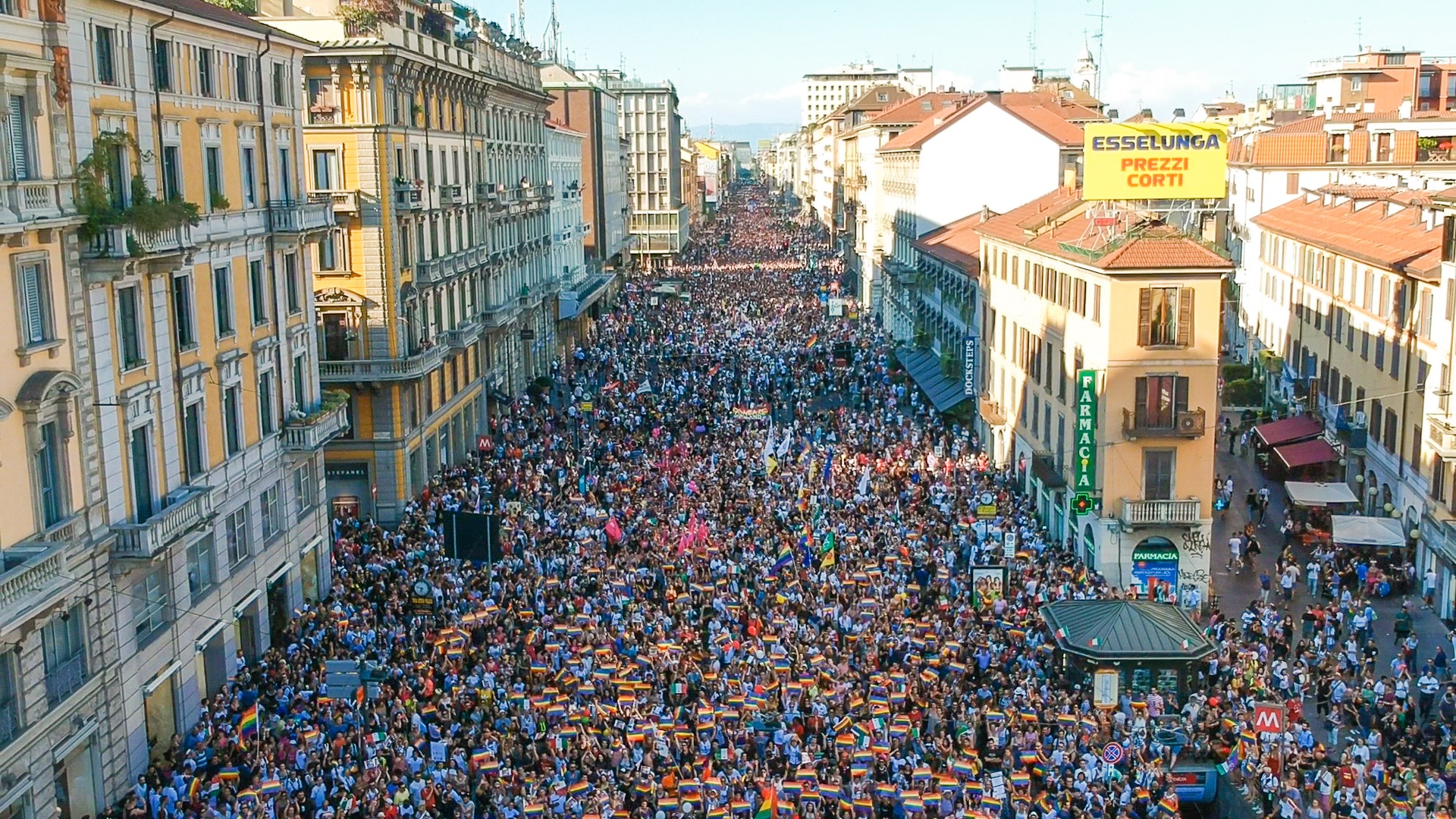 Milano Pride is very Italian-passionate, fun and decidedly political, in a good way. I was pleasantly surprised to experience such a vibrant, jam-packed and exceptional celebration as I have been to some of the best Prides throughout the world.

I attended the 2018 Milan Pride, a week-long celebration, from June 22rd through July 1st which attracted a record 250,000 people. Like most European countries, their parade is on Saturday, instead of Sunday, commonly chosen for parades in the United States. I attended London Pride last year and they held their parade on Saturday too.

Milan Pride is organized by the Commission of the CIG Arcigay Milano in collaboration with the associations in the Rainbow Coalition. It is part of Onda Pride, which unites all the Italian Prides. Their mission states that, “Milano Pride is first and foremost a manifestation of gay, lesbian, bisexual, transexual, asexual, intersexual, and queer pride: an extraordinary celebration of freedom that is made possible by the combined work of public offices, associations, and businesses as well as the participation of thousands of people.”

I was invited to a LGBT Tourism conference a couple of days before Pride, titled “All Guests Are Guests,” organized by The Italian Association of Gay & Lesbian Tourism. The event was focused on inclusiveness, intersectionality and improvement on the overall experience of queer travelers in Italy. Milano Pride takes into consideration all diversities, not just those tied to sexual orientation (immigration, disability, ethnicity, etc). It is in the mission of the Pride organization to care for the needs of other minorities. Inclusion and diversity was very obvious in all the events, including children and “Rainbow Families.”

My impression of the first main event was its great sense of community and camaraderie. It was casual, celebratory and very welcoming to everyone. Unlike most other Prides, it was not a big party with drunken people screaming and acting obnoxious. Although one can drink legally on the streets of Milan, I did not see much public drinking except for a few beers; I especially, did not see a single drunk person throughout the week or ambulances rushing back and forth.

The parade was very festive, happy and even corky and was led by a marching band. Their floats were designed mostly with unique artwork, bright colors and with cheerful flair. There were no floats with men in speedos dancing on it, nor did a single person take their shirt off throughout the day. One of the cutest floats was the “Rainbow Families” choo choo train, which had queer parents and their kids on it. Parade participants were very relaxed, happy and lacked the anxiety I witnessed in other cities. 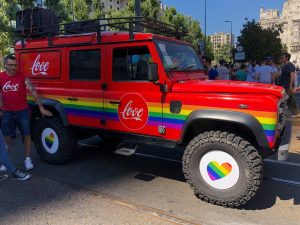 I observed a very interesting and glaring difference pertaining to corporate sponsorship of Milan Pride. Over a dozen corporations, most of which are based in the USA and do not show much support to the LGBT community at home, were sponsors of Milan Pride. Companies like eBay, Facebook, Google, Microsoft, PayPal, Coca Cola and Netflix were major sponsors and had floats in the parade.

The parade ended at Porta Venezia where a stage was setup. Several speeches opened the festivities, including by the organizer of Pride, several government representatives, activists and the Mayor of Milan, Giuseppe Sala. Mr. Sala vowed the crowd with a wholehearted and fervent speech that even made my guide and translator emotional. Italy is going through similar political climate as the USA, including immigration issues and his speech resonated with all minorities. The theme of inclusiveness and minority rights were present throughout Pride. A banner read, “Make Love, Not Borders”, was held through the parade. Most of the speeches echoed Italy’s immigration issues and right-wing’s tone-deafness to minority rights.

I got to the Pride stage a few minutes early to get my press-pass and noticed that about a thousand teenage girls had been waiting overnight to see Italy’s most popular idols, Benji & Fede. Italy’s sensational singing duo was scheduled to perform, so their diehard fans were waiting for them. Another superstar act was singer Jo Squillo who performed several songs and gave an impassioned speech about inclusiveness and LGBT support. Pride Saturday continued with festivities around the area of the stage and surrounding neighborhoods. There were a few events the next day to close Pride week, but I had a flight back to the USA early Sunday morning.

If you are planning to attend Milano Pride, you would want to see some of city’s most popular attractions. Milan is very metropolitan, eclectic and offers something for all kinds of travelers and interests. If you want to see ancient ruins, masterpiece paintings, renaissance structures, world-class museums and breathtaking churches, Milan is your city. It also offers exquisite food, fashion for all budgets, vibrant nightlife and much more.

If the Statue of Liberty is the heart of New York City, then Domm de Milan, the cathedral church of Milan is the grande dame of Milano. It is a gothic masterpiece dedicated to St Mary of the Nativity, the seat of the Archbishop of Milan, currently Archbishop Mario Delpini. The cathedral took nearly six centuries to complete. It is the largest church in Italy (the larger St. Peter’s Basilica is in the State of Vatican City) and the third largest in the world.

For upscale shopping and restaurants, visit Galleria Vittorio Emanuele II. Via Montenapoleone is Milan’s most prestigious shopping street which hosts top international brands, comparable to Rodeo Drive in LA, 5th Avenue in NYC and Avenue Montaigne in Paris. For lesser known designers and more unique clothing, check-out Corso di Porta Ticinese. Corso Buenos Aires is the longest shopping street in Milan and hosts hundreds of mid-range labels from around the globe. You can easily spend a half-day visiting all the shops with a break for lunch.

If you like opera and ballet, then you can’t miss La Scala, one of the most prestigious opera houses in the world. Jazz lovers will enjoy Blue Note Jazz Club where you can have dinner and see renowned musicians perform every night.

Milan is a beautiful city, ancient, culturally rich and with warm and hospitable people. Milano Pride exceeded all my expectations and set the bar for Prides I plan to attend in the future. It’s not too early to plan a trip to Italy and attend Milano Pride in 2019. For information and recommendations, visit the following organizations: