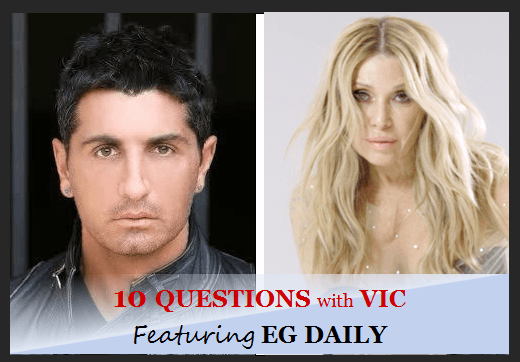 Best known for her iconic roles in films and television series spanning over generations, EG Daily is a Los Angeles native and started her career at an early age with roles on shows including “Laverne and Shirley,” “Chips,” and “Fame.” In the ‘80s, she had three Top 10 hits, including “Say It, Say It” by Benitez, which went #1 on the Billboard dance charts. EG also stunned judges on NBC’s “The Voice” once they realized that she had starred in the ‘80’s cult classic movie PEE WEE’S BIG ADVENTURE as Dottie, had voiced Tommy Pickles on Nickelodeon’s hit cartoon “Rugrats” and had guest-starred on NBC’s “Friends” as Leslie, Phoebe’s“Smelly Cat” songwriting partner.

Tell me about your new song, “So Pretty.”

So what happened was that I had been writing, I hadn’t put out a “song-song” for a while, and I wasn’t even actually trying. I always write for different projects, once So Pretty was finished, I felt very strongly about it and thought I want this to be a me song. I wanted to tackle it since the message was so important, so the next you know, I put together the team and hired the people to make the video. When the video was done, it became very clear to me that the message doesn’t just affect women, but also children, younger boys, and men— it affects everyone. True beauty is an inside job.

You recently said, “We can be our harshest critics and I want this song to be an anthem for everyone to say to themselves ‘I am more than enough.” Do you have any personal experiences to share?

Yeah, at my age, I’m still at a point where I want to look beautiful and feel pretty like everybody else. There were times when I’ve had make-up artists, hairstylists, wardrobe people, stylists—but if you’re not joyful in the inside, it doesn’t matter what you look like on the outside you won’t feel your beauty. I know from my personal experience that I have to ground myself and that I have to have self-love and self-compassion. I think people are most beautiful when they’re not trying to be beautiful.

What made you decide to include your two daughters in the video for “So Pretty”?

Well, because we all struggle with the issue of beauty and obsess about it. Especially with filtered selfies becoming the norm, thats a lot of pressure. In our household, we are all trying to encourage each other and to nurture each other from the inside out. Like I said, I like to do things with my tribe: I run with a pack, and my pack includes my daughters and a handful of my friends. And, of course, I wanted my daughters in it because they represent the millennials.

Although you are an actress and a Pop Star with a prolific music, film and TV career, you have also been the voice of a few iconic animated characters. Do more people associate you as a singer/actress/recording artist or the voice of Tommy Pickles in Rugrats, Buttercup in The Powerpuff Girls and Babe in Pig in the City?

You know, it so varies—I could be at a market and the check-out girl would say, “You are EG Daily, I love your voice, I love your music,” and then in the same check-out line, the person next to me in line will be like, “OMG you’re Tommy Pickles.” I gotta tell you–it’s so vast and it changes from person to person.

Tell me about your young fans, especially LGBT.

The gay community has been incredible. For decades, I’ve performed at Pride festivals and LGBT events all across the country. They are my tribe.

Your Kickstarter campaign is an opportunity for everyone to help and join this movement. Tell me a little about that.

First of all, there are some great perks we offer for pledging this Kickstarter- like joining us for an intimate dinner and my team, orjoining us at a special concert with a private Q & A for the backers only! Funds raised with this Kickstarter will also go towards creating and growing this movement, and to the proper marketing and promotion channels to get the song and its message out there globally. Also a portion will go toward a cause that mirrors our movement.

Your project donates to several charities. What are a few of your favorite charities and causes?

We are actually working on it right now, we are actually going to bring people in and ask them what their favorite ones are, there are so many, we are asking around, especially organizations that encourage self-love.

What other projects do you have coming up?

I have a brand new animated series that I’m very excited about called “Maddie and Friends”. We are celebrating “Rugrats’” new re-boot of 26 new episodes, as well as celebrating the 20th anniversary of “The Powerpuff Girls.” Also, the Blu-ray release for “Valley Girl” 30th anniversary and on November 2nd, “So Pretty” drops!

I most admire those who don’t bow down or people-please, but rather stay true to themselves. I love Oprah Winfrey, Gigi Gorgeous, Lady Gaga, Meryl Streep, and Barack Obama, to name few. I have a lot of friends who are transgender and I admire anyone who stays true to themselves.

I like shiny balloons and cozy faux fur blankets.

The song, “So Pretty” can be pre-ordered on iTunes now. The video launches on Friday, November 2nd and you can join EG’s movement and contribute to her Kickstarter campaign.

THE TRANS COMMUNITY HAS OUR OWN MEMO FILM REVIEW: “HALLOWEEN 2018”