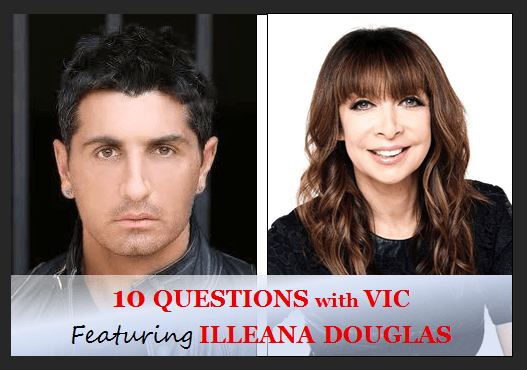 Illeana Douglas is a renaissance woman. Her distinguished career includes theater, standup comedy, movies, including several Martin Scorsese films, TV, writing, music and producing. She exemplifies an artist who never stops creating and generating her own projects. Illeana will receive the Pioneer in Comedy Award, at the first annual Palm Springs International Comedy Festival Awards coming November 16th – 18th, in Downtown Palm Springs. She can currently be seen in the show Funny Ladies, on Turner Classic Movies, where she’s joined by comedy legend Carol Burnett, to present a roundup of great comedic actresses.

I’ve always said art is where you make it. I see the world as an artist. I try to live my life as an artist would. Finding beauty in nature. Compositions excite me. I love to people watch. It’s important to engage in the world otherwise your outlook becomes static. I want to express the human condition with laughter and with pathos. Please don’t call me quirky.

You are a Renaissance Woman, you act, write, direct, produce, host a podcast and much more. How do you juggle all of it?

I’m happiest when I am working. I’m here to learn, so I work hard at getting better at my craft. Being a better interviewer, preserving film histories, telling women’s stories as a writer/director. In my down time I love to cook, and as most people know I am pretty dedicated to my dance classes.

Entertainment Weekly named your memoir, I Blame Dennis Hopper: Stories from A Life Lived In and Out of the Movies “one of the best books of 2016.” How does it feel to be praised for your writing after having won numerous acting awards?

My grandfather Melvyn Douglas always wanted me to be a writer. After reading some stories I had written, he gave me a few books for inspiration. One of my favorites was Dorothy Parker. That led me down the path of really wanting to be a writer. What I tried to do was not so much “write” but just tell good stories. That’s what a writer/director does anyway. I love acting, and I want to continue acting! My grandfather won his first Oscar at age 63, his second Oscar at 80! I’m a character actress, so there will always be time for me to pursue great acting roles, but my role as a writer is obviously more personal.

Your follow up memoir, This Never Happened: Outrageous Stories from a Life Lived In and Out of the Movies will be out in November 2019. Can you share some details, preview or teaser?

There were a couple stories that did not make the first book. They were slightly creepy, or verging on black humor, and I didn’t feel they fitted in the narrative, so we pulled them out. This lead me to thinking-because I always liked stories about the dark nature of suburbia like Cheever, or the dark humor of Evelyn Waugh or Dorothy Parker that maybe the second book could be all outrageous things that ever happened to me with a decidedly wicked comic edge. The phrase comes from something Peter Bogdanovich used to say to me before every take, “Remember Illeana…this never happened”. I started to think about all the things that I wished had never happened to me. I thought that might be a great premise for the next book.  Do the darker things that have happened to us make us appreciate the good things?

Tell me about your new show on TCM.

Funny Ladies is cohosted by comic legend Carol Burnett. We discuss some of the great film comedians going back to the silent era and their influence on American cinema. We show about 20 different films featuring talent from Mae West, Carole Lombard, Rosalind Russel, Goldie Hawn, etc. It’s a great way to showcase Carol Burnett not only talking about her career, but about some of the woman who influenced and mentored her like Lucille Ball.

What directors and/or actors would you like to work with that you haven’t done so yet?

A lot has been written about your illustrious career, famous grandfather and personal life. What would you like your fans to know about you that isn’t well-known?

My great grandparents on my father’s side were songwriters.  There is a long line of entertainers in our family. My great uncle-George Douglas- brother to Melvyn was also an actor, but mainly did B films.

There are a few. Chimp Haven, Paws. Also Paul Newman’s Hole in the Wall Gang Camp.

What other project(s) that I did not mention are you working on?

I am directing a film that I wrote called Love is Funny. It’s a romantic comedy with some serious social issues.

I once interviewed an actor who was a suspect in an unsolved murder.