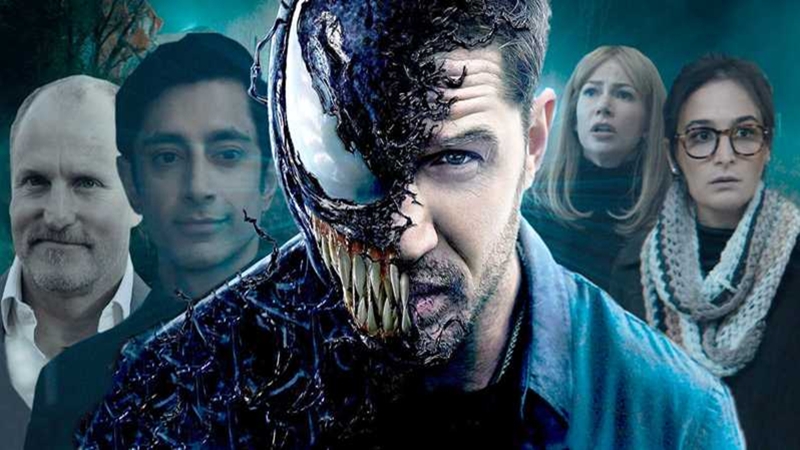 There are some films in the superhero genre that hit a home run in terms of cinematography, storytelling, character development and casting. Films like The Winter Soldier and The Dark Knight set the benchmark for the type of quality in a superhero film. Films like Black Panther and Wonder Woman may have a few minor flaws, but entertain, engage with compelling stories of topical social significance. And then there are films like Justice League and Suicide Squad, which are best described as complete and utter messes from beginning to the end. And then there are superhero films that somehow inexplicably manage to accomplish being both fun and stimulating, while also being ridiculous and all over the place. Sony’s latest Marvel adaptation, “Venom”, is just that movie.

Directed by Ruben Fleischer (Zombieland, Gangster Squad), the plot centers around the charming and impulsive investigative journalist, Eddie Brock. Played by Tom Hardy, Eddie Brock’s character is motivated by his savior complex and need to fight for the little guy. Unfortunately, as the plot hints several times, this quality has cost him several jobs and even forced him to relocate from New York to San Francisco. Eddie comes into contact with the alien symbiote known as Venom (also voiced by Hardy) after breaking into a Bioengineering company called “Life Foundation”, run by the seemingly benevolent but villainous CEO Colton Drake (played by Riz Ahmed). Drake hopes to bond these symbiotes with humans in an attempt to save mankind once the earth is no longer inhabitable. Eddie’s fiancée Anne Weying (played by Michelle Williams), is a lawyer working for the Life Foundation, who breaks up with Eddie after they both lose their jobs due to Eddie attempting to expose Drake’s crimes. After Eddie bonds with Venom, the two of them form a relationship similar to the “Odd Couple”, portrayed brilliantly by Hardy. Venom wants to experience life in this world through Eddie, and Eddie in turn is afforded numerous superhuman abilities. When fully bonded, they appear as a 7 foot tall muscular jet-black creature, with a monstrous face equipped with teeth and a lizard-like tongue. Together, they work to ensure their mutual survival and stop Drake from bringing millions of other symbiotes back to Earth, where they will undoubtedly overrun the planet.

Regarding the film’s tone, this film fortunately seems to know what it wants to be. Despite the awkward pacing of the beginning and brief exposition of Eddie’s backstory, once “Venom” enters the picture, the tone is reminiscent of a Buddy-Cop Action movie with some comedic elements thrown in. Tom Hardy’s performance as Brock and the voice of Venom not only supports this tone but in fact holds up most of the movie, in turn making up for some of its glaring flaws. His clear understanding of both characters enables him to create both banter and a stark contrast between the two entities. Much of this film works because of Hardy, and what will surprise many fans is that the film’s most humorous moments primarily come from “Venom’s” voiceovers.

The film does however suffer from numerous plot holes, inconsistencies and pacing problems, particularly some questions regarding the symbiotes’ capabilities and background. It’s unclear whether the symbiote inevitably destroys all hosts that are not compatible or simply chooses to at random. At one point, the plot states that the symbiote is in fact eating Eddie from the inside out. However this plot point is later abandoned when Eddie must re-bond with the symbiote to engage in a final conflict with the main antagonist, and is subsequently never addressed again in the film despite being a point of conflict within the story.

This leads us to the problem that many superhero genre movies suffer from, which is the infamous “Villain problem.” Riz Ahmed is a gifted actor but simply does not play a menacing villain convincingly. What may have helped would be if the Drake’s motivations had been more clearly fleshed out or grounded. But this is never made clear. Much of his dialogue is hollow. It offered little to no insight into his character and often times were nothing more than philosophical rants similar to the kind we got from Jesse Eisenberg’s Lex Luthor in “Batman vs. Superman: Dawn of Justice.” It just didn’t work, and it felt like a villain that belonged to a different movie. The same can be said for the love interest Anne, played by Michelle Williams. Williams is a seasoned actress whose body of work speaks for itself, but like most “superhero girlfriends” she is given little to do that is actually relevant to the story. And the way her character is afforded comedy in this script is not only out of place within the context of the movie, it also fails to match what Hardy is doing. While Tom Hardy’s humorous interactions with the voice of Venom work effortlessly within the context of the scenes, Anne reacts to the events around her in ways that make no logical sense from a narrative perspective or even just an emotional perspective. Sadly, there are instances in some movies where you notice a character that you could completely cut out of the movie with little affecting the plot, and unfortunately William’s character is one of them.

This movie does however provide some nice Easter eggs from the source material, including the inherent weaknesses of the symbiotes, the down-on-his-luck characteristic of Eddie Brock, and end credits scene featuring Woody Harrelson as Cletus Cassidy aka “Carnage.” Carnage is another Spiderman villain, who later in the mythology is also possessed by an alien symbiote. Fans of the comic book will find that Venom “mostly” resembles the character they know and love, however it must be noted that this is a vastly different interpretation from the often evil opponent of Spiderman we’ve seen in comics and on screen. This Venom is more of an anti-hero, and Eddie Brock is not as aggressive or hot-headed as his comic book counterpart, but instead more of an everyman who wants to champion what is right regardless of consequences. But despite the alternative take on the character, this version of Eddie Brock and Venom does in fact work quite well. Indeed, it could be stated that in fact, this film would continue to function at its best as a self-contained film, as opposed to being part of an expanded Marvel Universe or even introducing a Spiderman character opposite this Venom. As expected in a Marvel film, there are numerous action scenes in this movie. A few are excellently shot and choreographed with Tom Hardy remaining in his human form but attacking with the ooze-like tentacles of Venom. However there are two scenes in particular where he is fully on display as the CGI Venom, and it becomes an overly fast-paced, frantic, messy CGI battle. The final fight especially where Drake is possessed by another symbiote is so jarring and erratic, that it becomes sloppy and hard to follow. The fight ultimately devolves into two ooze monsters smashing into each other in a way that is not pleasing to an audience over the age of 15. Perhaps there is a small fraction of people won’t mind this as many are accustomed to CGI-heavy fight scenes throughout the years.

While this film certainly struggles in terms of plot consistency, pacing and character development, it is quite fun and quite entertaining overall. Tom Hardy’s performance is engaging and pitch perfect, as he essentially plays himself. The action is decent and what you would expect from a film like this. It is not overly dark and dreary, nor is it overtly bright and laden with punch-lines that undercut dramatic tension. Overall I would give this movie a C+ and summarize it as an imperfect, ridiculous, enjoyable mess of a superhero movie.

Christopher Henry is a critic and writer for The Blunt Post. Originally from Boston, Christopher has worked as an actor, singer and comic in New York City for over 10 years.
TransLatina Coalition: Front and Center 10 QUESTIONS with VIC, featuring ILLEANA DOUGLAS