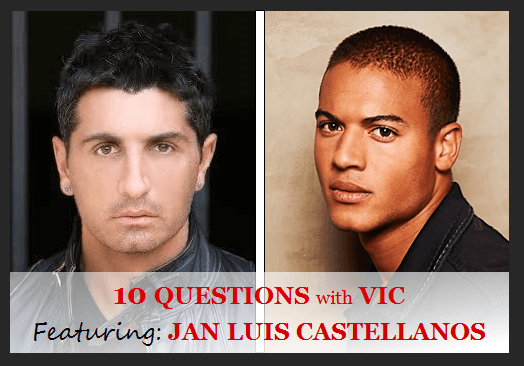 Jan Luis Castellanos seems to have it all-former model turned actor who won the jackpot, playing “Topher” in Marvel’s Runaways. But winning the lotto has not made him jaded or caused him to take anything for granted. The popular actor celebrates the challenges that have brought him to this point, appreciates his fans and works hard to take his career to the next level. If that’s not enough for humility and modesty, he prays every morning and goes to Church on Sundays.

Modesty aside, I’m a Renaissance man and committed to going after what I want. I seek challenges and see myself as the hardest worker in any room and that’s how I get the best results. I can be self-centered—but mainly because if I don’t center myself, no one else will. Don’t take me too serious either; I love to have a good laugh. But when work calls— it’s time to work.

There is tremendous mystique and grandness to the Marvel Empire for those of us on the outside looking in. As a member of the Marvel family, does it feel that way to you too?

Honestly, yes! It really hits me when I’m around people and that’s the choice of conversation. Growing up, I admired all these great actors, from Robert Downey Jr. to Ryan Reynolds. It’s something I’m definitely proud of and a name I must live up to.

You were born in the Dominican Republic and grew up in New Jersey since the age of eight. How do you reflect on your journey until this point?

Do I wish it was a bit smoother in some areas? Possibly. But I wouldn’t trade it for a penny because everything I’ve done, everything that’s happened, it’s all led me up to this point. Good or bad, it’s been a heck of a journey to be honest. I’m a big believer in “what’s mine is mine” you just have to go out and get it.

Comic book fans are known to be very intense and loyal, but even more are Marvel fans. Tell me about your fans when they recognize you.

I was caught a bit off-guard the first time. I was at the gym all pumped up when I had someone come up to me and say “hey, you’re on Runaways right?” It was a funny feeling, trying to fathom what had happened. You’d be surprised how much these fans know about Topher from the comics. It was nice.

It all starts with my morning routine. Mornings are for me. I get to relax, pray, brainstorm, meditate, write, exercise, and read. All before getting to work and answering emails. If not on set shooting for 12hrs a day, the norm is working on my latest project or getting ready for my next audition. Daily walks for active rest, eating healthy, and definitely can’t forget about the good ole’ afternoon nap.

Bad Bunny and Ozuna are new on my playlist. I drifted from Spanish music a while ago but it started creeping up on me again for sure.

How do you decompress on a day off?

I like to stay away from my phone. Go to church if it’s a Sunday, read, or go on a hike. I love watching old classics like Taxi Driver and eating a large Margarita pizza pie. Robert De Niro and Martin Scorsese is one of my favorite combinations. They have really created such art together, it’s phenomenal.

Who are a few directors and/or actors you would like to work with?

I’d love to work with Guillermo Del Toro someday. Bradley Cooper has really blown me away directing ‘A Star is Born’ as well. As per actors, Ryan Reynolds has really been growing on me. That dude is hilarious. Jessica Chastain is also a great actress. However, I’d also love to work with some of the younger actors as well like Noah Centineo, Cara Delevingne, and Ansel Elgort for sure.

My favorite charity by far is ChildHelp. It is a non-profit organization that aids children who have been victims of abuse and neglect. ChildHelp offers endless amounts of protection and a much safer environment. For more information visit www.childhelp.org

I didn’t have an agent when I had landed the role of ‘Topher’ on Marvel’s Runaways’. It just goes to show that anything is possible.