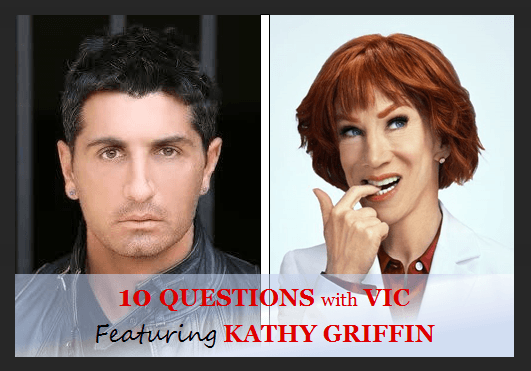 Kathy Griffin is officially on the A List-period. An army of fans around the world rejoice seeing Kathy overcome and conquer the onslaught of over-reaction, aggression and bullying by Donald Trump, his administration and the Federal Government. We love her as a comedian, a courageous public figure, a bad-ass who tells it like it is at the pinnacle of her career. We first tuned in to Suddenly Susan to watch Kathy’s character, Vicki Groener, because she was the most interesting person to watch and because we knew she was headed up Hollywood’s alphabetical pecking-order. Two Emmy Awards for her hit show on Bravo network’s My Life on the D-List, a Golden Globe Award, and in 2013 Kathy attained the Guinness World Records title for most televised stand-up specials with the premiere of her 20th show on HBO. We live vicariously through her victory as she leaves the small d behind and steps into the big A, while laughing our heads off.

I’m a goddamn legend!  Alright, I may not be one until I’m dead, but oh what a legend I’ll be!  I describe myself as someone who lives to make people laugh.  Yes, I like to stir things up and push boundaries, but hey, if you want to see some nice, homespun clean humor, watch the 700 Club.

How does it feel to receive the Comedian of the Year Award from the Palm Springs International Comedy Festival?

What a difference a year makes!  This award is so meaningful to me because I have spent decades truly trying to hone my craft and being the very best comedian, actress and improviser I can be.  After my Trump mask scandal, I learned very quickly that I simply had to up my game with my material and be truly fearless about it.

You went through a tough, tumultuous and controversial year and came out victorious. Your world tour, Laugh Your Head Off, is a smashing success, selling-out quicker than you can add dates. How is the sweet smell of victory?

Like a brand new lavender scented candle.  Honestly, it has been a slow and laborious claw back, but completely worth every up and down.  I have enjoyed doing the Kathy Griffin “Laugh Your Head Off” World Tour even though it has been the most difficult tour of my life.  If nothing else, it is vital to me that anyone who is interested and watching sees that this President or any other should not have the power to try and decimate a single American citizen. I have actually enjoyed fighting back one joke at a time.

What have you learned in the last year, having gone through what you did? Would you do anything differently?

I would do many things differently!  I think it is hilarious when celebrities jump to the “I wouldn’t change a thing” B.S.  This experience, which started with a photo amplified on TMZ, to Federal agencies investigating me, and being put on the “No Fly List” as if I am a terrorist, is so over the top I had to make many missteps to try to figure my own way out of this unique and historic situation.  Looking back, I am probably most grateful that I ultimately listened to my inner comedy gut and decided to basically put my middle finger in the air and get back on the road.

You volunteer your time and open the drag pageant, Best in Drag Show, which is an annual fundraiser for Aid for AIDS. Why is this cause important to you?

Best in Drag Show benefits a great organization called Alliance for Housing and Healing, formerly known as Aids for AIDS.  The event started out very organically in the living room of Alexis Pittman’s apartment.  We lost Alexis to HIV, and in his honor, the show gets bigger and better every year.  It is an over the top drag show like you have never seen.  The evening is also wildly inappropriate when it comes to the characters, costumes and humor.  And who doesn’t love that?

Do you feel pressure to be funny all the time during your daily life? Is there an expectation?

I’m pretty “on,” as they say. I would say I am a little atypical compared to most comedians I have known, in that I am similar off stage to my incredibly delightful persona on stage.  Many comedians are very shy and often pensive, bruiting types off stage.  I like my quiet time but I really do try to make the people around me laugh every day.

When I’m on tour, I’m on a nighttime schedule.  Sleep in, have a healthy meal three hours prior to show time, and it usually takes me about three hours to come down after the show.  I watch a light of late night cable.  When I’m off the road, I do a lot of writing, producing fun little videos for my social media, and I’m just now starting to be asked to do guest appearances on television again.  I was very honored to play Kellyanne Conway twice this season on Comedy Central’s The President Show.

I like to let my friends contribute to my playlist.  It is quite varied.  If it were up to me, it would pretty much be Céline, Backstreet Boys, Britney…you get the idea.  But my more musically sophisticated friends keep me in my place.  Although I wish I could get Josh Groban to stop taking off all my Michael Bolton songs.

You have a massive army of fans around the world, tell me about them.

Well, they sure showed up this year, didn’t they?  One thing that gave me a sliver of hope days after the Trump photo was a video on Twitter of a group of gay guys dressed as I was in the photo (blue dress and all), carrying Donald Trump masks and parading around Fire Island.  The LGBT community is ahead of the curve, once again.  And yes, I know that is a pun.  I will admit the photo that has caused me so much angst, is the photo that this year has single-handedly turned me into a global touring artist.  Before North America, I started this show in Auckland, New Zealand and ended up in Reykjavik, Iceland and everywhere in between.

After the infamous Trump photo, Cher sent me the following text that made me laugh out loud: “You wanted to be famous bitch!”