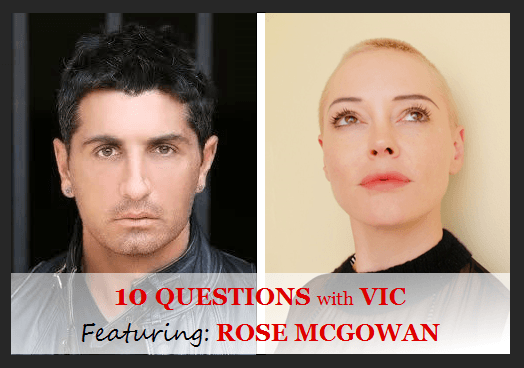 Often, it isn’t until a long time has passed when we fully appreciate and acknowledge a star’s legacy. But that is not the case with Rose McGowan, whose natural talents have earned her immense success and critical acclaim, striking beauty has forever elevated Hollywood iconography, exceptional intellect has made her a survivor and a champion, and finally, her charisma and articulation have made her the Joan of Arc of the #MeToo and Time’s Up. It is difficult to measure an artist’s contribution to society, countless people she influences and inspires. But it’s impossible to ascertain Rose’s impact as the defacto heroin of a historical and long overdue global movement. She has conquered acting, singing, writing, producing, directing, public speaking and they have led her to this new chapter in her life where she sheds old pedals to reveal fresh glorious beauty.

A good person who just wants the best for everyone.

You have emerged as a heroine, a pillar of strength and an inspiration for millions after a tumultuous and controversial year. How are you doing now?

The past few years have been harder than I could imagine. Surviving the last year most especially. What helped me was the support I got in real life. I’ve met person after person who says keep going, keep fighting. It has been both humbling and inspiring. It was a hard, hard year, but there were bright spots of joy here and there. I try to focus on those. The answer is I’m healing. I have great friends and a great relationship that is helping with the healing.

What have you learned from the last year that you can share with people who might have gone through or still going through similar experiences?

I have learned that we are stronger than we know, that tears equal strength, that pain equals growth, and to just hang on because it does in fact get better. Keep going, no matter what, keep going.

Would you do anything differently?

There are certain toxic people I wish I’d never let into my life. I had no idea how dark some people’s secrets are and the lengths they’ll go to protect those secrets.

Do you feel pressure to be strong all the time considering your strength and defacto role as a leader?

It’s an unusual pressure. We haven’t been here before societally, there is no road map. A bit like walking through a jungle with a machete and you have no idea where the drop offs are but you hope for the best. For me, the best is always trying to be ten percent better than I have to be, I use it as a personal challenge and one that may inspire others to be better versions of themselves.

You have an impressive resume as an actress in film and TV but have since added best-selling author with your memoir, Brave, and a documentarian with your four-part docuseries Citizen Rose. Do you miss acting and do you plan to do film or TV again soon?

I’m proud of my body of work. I did the best I could job wise despite being heavily blacklisted. TV and film were very separate businesses at the time. The TV producers on Charmed didn’t know that I had been canceled in the movie industry. I always tried to communicate with the audience through my eyes, now it’s time for my own voice. Through acting I inhabited many skins, lives, voices- so many other people for so many years, it’s time for me to just be me. For now, I can’t see acting anytime in the future. I do miss directing and crafting a story, but right now I feel like we don’t have time for metaphors. What needs to be said needs to be said.

Tell me a bit about the album you’re working on?

Planet 9 is the name of my upcoming album. I’ve been crafting it for three years. I like to say it’s music that can take us to space. Suspended in time, given room to feel and move. The album takes listeners on a journey for sure. If you mixed up Pink Floyd, Grace Jones and Stevie Knicks with some propulsive French beats, you have Planet 9.

Tell me about your fans, especially people who reach out to you following the past year.

I have met extraordinary beings this past year. I’m honored to walk with them on this journey, which is why I’m turning my Instagram @rosemcgowan over to others to share their truths on my page for the month. Calling it #NOvember I’m really excited to highlight and honor those who are fighting the good fight. People that have risen up and are rising; it’s a beautiful thing to witness. I hope you’ll all join us.

What are a few misconceptions about you?

Ooof, that I’m transphobic. Nothing could be further from the truth. This one hurts a lot because my life has been interwoven with the community since I was 13 years old. I was runaway taken in by two loving trans women who saved me from a life on the streets. The idea that I’m transphobic makes me physically ill, it hurts my soul. When I said, “what have you done for women?” I meant ALL women.

You have traveled quite a bit in the last year. Has your perspective changed being outside of the USA looking in?

When I came to America as a young girl, I experienced massive culture shock. That shock never really went away, and it does feel like a gentler life not being there. I think we all know why.

Do you have any advice for people who are victimized, bullied and harassed but feel fearful and powerless?

Act as if you are brave and you will become brave. It doesn’t mean you won’t be scared, it just means you do it anyway.

I really advocate for the smaller charities, the ones that are on the front lines. It is not easy and I tip my hat to them. In the past, I’ve volunteered at Covenant House helping homeless LGBTQ teenagers, my focus for years being gay rights. I also love the East Los Angeles Women’s Center; an extraordinary place doing great aftercare work with rape and human trafficking survivors. Now that this year has settled down a bit, I hope to get back to more volunteer work. We all should.

All of us who have survived and come out the other side of pain. Those who inspire. I also really admire my partner, Rain Dove.

I have a skincare line called The Only that I’ve been developing with my aunt Rory for 8 years. It’s an incredible product mixing science and nature. I’m working on the visuals to go with my album, Planet 9, because I want it to be an experience. Also, starting work on my next book and preparing for BRAVE to come out in paperback!

When I’m in America, I eat at Taco Bell at least two times a week. I know I shouldn’t, but I just can’t help myself.

For more information on Rose McGowan and to purchase her book, Brave, please visit www.rosemcgowan.com