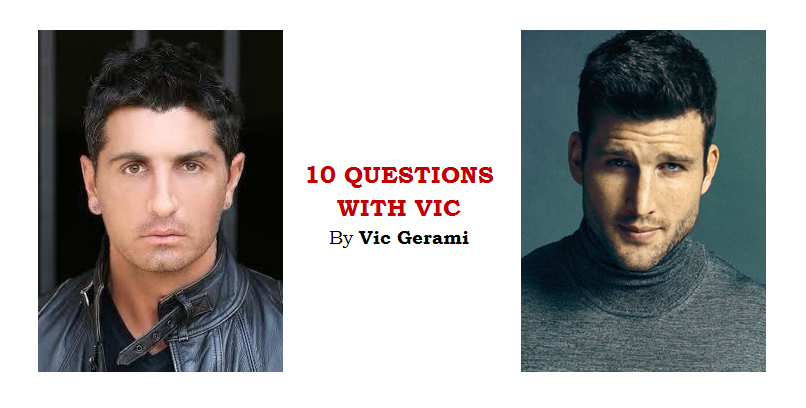 Don’t let Parker Young’s chiseled good looks and his modeling days for Calvin Klein and Tommy Hilfiger fool you, as he is much more than a pretty face.  This Arizona native, all-American, former football team captain’s well-rounded talents and grounded personality have helped to make him a sought-after leading man in Hollywood. Life keeps getting better for the star of Bravo’s hit show, Imposters, as he is about to become a first-time father.

I guess I’m just a dude who’s trying to have a good time, and help some people along the way.

You grew up an all-American guy in Arizona, playing football, before moving to Los Angeles to pursue acting. How did that transition happen?

I took a theater class my junior year of high school, and for whatever reason my teacher was very encouraging.  I think he simply needed more guys in the class, but nonetheless he let me skip into the advanced theater program, and suddenly the captain of the football team was leaving practice early to hurry to rehearsals.  I’m sure I wasn’t anything too special on stage, but I definitely enjoyed myself enough to want to make a career out of it, and I guess I was simply naive enough to think I could make it happen.  So I packed my bags and headed to Hollywood.

How do you reflect on your days as a model for Calvin Klein and Tommy Hilfiger?

The modeling thing wasn’t really for me.

You have been a very in-demand, busy and successful actor for years and now you are on Bravo’s “Imposters.” Has the journey been as rewarding as your current successes?

Absolutely!  I’ve had a lot of incredible experiences, as well as a lot of difficult ones, and I wouldn’t trade any of them.

How is it to star in Imposters, on a very innovative and groundbreaking network like Bravo?

I love being on Bravo.  They are relatively new to the scripted game, so I feel like they are especially committed to helping their shows succeed.  Plus Bravo fans are diehard.

Normally my day would consist of several or all of the following: work out, meditate, film, meetings, study, write… However, I am at an interesting precipice right now in my life as I am about to have a daughter in a couple of months, and since my life is probably about to change forever, my daily agenda has temporarily shifted slightly.  At the moment my days consist of, in addition to doing press for Imposters, basically getting ready to become a dad.

For my lady that means “nesting,” i.e. nonstop decorating of the baby’s room and buying baby supplies and whatnot for the last 7 months.  For me it’s been more about getting my mind right. I’ve read more books than I have in the last couple years.  I’ve learned to surf, sail, golf, slack-line, play the ukulele, and play racket ball.  I’ve gone camping, dirt biking, rock climbing, rappelling, played tennis and basketball consistently, and competed in a triathlon.  Next on the list is Brazilian

jiu jitsu.  It’s as if I’m attempting to obtain some last minute knowledge and skills in hopes of being able to impart even a modicum of wisdom on this little girl. I feel very fortunate to have been afforded the opportunity to take some time to reflect on my life—where I’ve been, where I’m at, and where I want to go—because pretty soon my average day may look a whole lot different.

Tell me about your fans? Do you have any interesting stories?

I love meeting fans.  I was at a gym today on a Navy Base in Coronado playing basketball.  A couple guys challenged my buddy and me to a game of 2 on 2.  Half way through the game the guy defending me said, “You look like an actor.”  He was trying to think of who I looked like the whole game, and I’m pretty sure that’s why we won.  He finally figured it out and we took some pictures and agreed to a rematch next time.

What is your favorite cause or charity?

I compete in a triathlon every year to help raise money for St. Jude Children’s Hospital.  I love St. Jude because when a family takes their child to the hospital to be treated for cancer, they never receive a single bill for anything; not for treatment, travel, housing, or food. All that all they have to worry about is helping their baby.

Right now I’m contractually tied to Imposters, so I’m keeping my fingers crossed for a third season as I prepare for my biggest project yet, raising a daughter!

I could probably beat you at a breath holding contest.