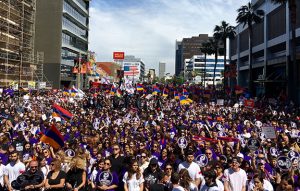 On April 24th, I went outside to walk my dog and walked right into the Armenian Genocide Remembrance March. Led by City of Los Angeles Councilman Mitch O’Farrell, there were generations of families marching with US flags and Armenian flags, crying out for justice. The justice they want is so small, but has become a political landmine. They want the USA, their new home, to acknowledge that the Armenian Genocide actually happened, but due to our government’s “special relationship” with Turkey, it hasn’t happened. To this day, Turkey denies everything, claiming it was a tragedy of war, but if you look closer, there is no way to call this anything more than an atrocity, extermination, Genocide. The Turkish systematically butchered 1.5 million Armenians for the crime of being Christian in an area of the world where claiming Christ is dangerous. All one has to do in this age of instant information is to Google the Armenian Genocide and you’ll find pictures of naked girls crucified in the desert and piles of dead children. You’ll also find numerous sites dedicated to denial of this genocide. Denial is the last chapter of genocide. 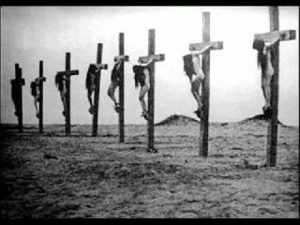 What struck me the most when I was watching this march for justice was that the Armenians pretty much walk alone. I saw one Mexican flag and a sign saying “Mexicans for Genocide Acknowledgement.” It really bothers me that in this time of social justice and attempts to make amends for the past, Armenians walk alone. We can’t get to the Women’s March fast enough, or a few years ago, trash Manhattan with disposable cups for the Climate March. I feel that most “social justice” is extremely self-serving and just a chance to feel good about oneself while marching with friends and making viral-worthy signs. Yes, there are issues to march for, but then why do the Armenians march alone? Do we only want justice when it pertains to our own lives? Certainly, our government officially acknowledging the Armenian Genocide would not change most people’s lives, but the Armenian Americans live with open wounds. In some countries, it’s illegal and considered a hate crime to deny the Holocaust, but our government won’t acknowledge the genocide that Hitler used to pattern his extermination of Jews during WWII. Addressing his Nazi generals before the invasion of Poland, Hitler said, “Who, after all, speaks today of the annihilation of the Armenians?” 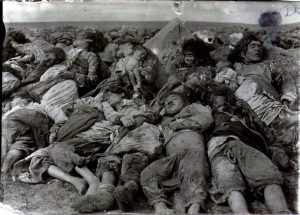 This passive denial of the Armenian Genocide should bring bile to the mouth of every human alive. Looking the other way, or complaining on FB about the road closures are just another callous on our selfish hearts. Do we not care because they were killed for being Christians and that religion is taboo in our current political climate? Just last week, the leaders of the Orthodox and Evangelical Christian Churches in Syria wrote open letters to the UN and to greater Christendom, begging and crying out for our violent aggression to stop. Did any of you know this? Did you even know that Syria has been a safe haven for Christians? The crickets on this cry for help really rankled me, because justice belongs to all wronged people, regardless of faith.

All of this to say that the April 24th marches should DWARF the Women’s March. This transcends faith into human rights, and every person with half a conscience should march and demand this justice for our Armenian neighbors.

I will now speak directly to those who claim Christ: Archbishop Jose Gomez, Bishop John Harvey Taylor, the Synod of the Presbyterian Church, leaders of the Methodists, Baptists, and Lutherans, and anyone I’ve left out, where have you been? It is a solemn duty of those who claim the name of Christ and all that he stood for, to stand with your brothers and sisters in Christ, the descendants of martyrs. It’s a holy duty for those of ALL faiths to serve one’s neighbor and fight for them when necessary.

It’s time for social justice to extend to Armenians. It’s time for humans of all races, creeds, and religions to cry for justice and an official acknowledgement of the Armenian Genocide. Let’s help them heal.

Shame on Turkey and shame on us.