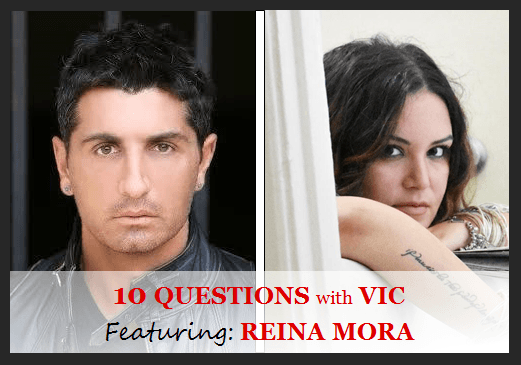 It’s hard to label the multi-talented Reina Mora or her genre of music, and that’s a good thing. Her wide range of vocals, dense and textured music and three hit singles, made her one of music industry’s breakout artists of 2018. Since, Reina has been busy putting the finishing touches on her new pop album, “Birds Eye View” and working with Puerto Ricans in Action to help with Relief from Hurricane Maria.

I am outspoken, strong minded and stubborn. When I set my mind to do something I do it full speed ahead no looking back even if I fall or make mistakes I get back up and keep going. I don’t know how else to be. I’ve been determined my entire life especially when it came to making music.

What genre, if any, would describe your music and how did it feel to have your three singles released in 2018 be received so well?

My music is Alternative Latin infused pop. I’ve tried to blend the past with the current. It felt great for the singles, but I’ve been writing so many new songs that I’ve been in hibernation mode in the studio recording all this time, so I am ready to show new material. The Album was done but since I’ve been so inspired to write I’ve added more songs to it and may take out some old ones so tough decisions must be made soon.

You are about to release your first full album. What is it titled? Can you share a bit about it?

It’s called “Birds Eye View” and the tittle is the best description of it. It’s a full view of me and my life experiences. The good, the bad and the ugly sides I hide. Which is why my music is my therapy, my getaway and sanctuary that I hope helps make other people feel less alone in this crazy uncertain world we live in.

Your music at times incorporates your Latin roots. Is that something organic to you or is it an artistic choice?

It’s both. I want people to know that I am proud of where I am from, that even though I am a fair skinned Latina, I am Puerto Rican. A lot of people, especially in LA, can’t guess where I am from half the time unless I start talking in Spanish. I want people to know that Puerto Rico is a beautiful melting pot of people filled with culture and pride that is ingrained in us since birth.

Tell me about your book, Deserted Cathedral.

It’s a book or poetry I’ve been writing for a while now, but was afraid to share. Some are old poems from my youth but most are recent; it’s like the faucet never stop running and the poems flowed out of me like water. I had so much to say through poetry, especially after my mother’s passing this year. I spent some time with her in the hospital the weeks leading up to her passing and I read her poetry books I brought. She asked me if I had any of mine so I read some to her. She loved it so much and requested I publish them. It’s really all thanks to her that I will finally be releasing the book soon.

Well the minute Hurricane Irma hit I reached out to Nicole, the head of PRIA to see what I can do to help. I went to the first event and spoke about my experience with Hurricane George when I was in Puerto Rico and donated money. Then Hurricane Maria struck and I planned a show at Bar Lubitsch where all the proceeds of the event would go to helping send care packages to Puerto Rico. I helped do as much as I possibly could to the point where now Nicole and I still work closely on organizing more events together. Right now we have been focused on sending Water Filter Systems to families in need since so many people died not having clean water to drink on the island. People are still struggling and we are still trying to find ways to help. We also do events here in LA educating people about Puerto Rico because it’s not often taught in classes that we are a US Territory. We use the same currency, you don’t need a passport to come and yes we are American citizens even though we can’t vote for the US President. The “Let’s Talk about Puerto Rico” events educate people about our music, culture and history. I sing native songs from Puerto Rico and explain the history behind the songs. It’s also been enlightening for me and I’ve even learned how to dance some Bomba. I’ll be working on an album with PRIA next year.

Tell me how helping Puerto Rico after the devastation of Hurricane Maria is close to your heart.

Well, my family and I had to start from ground zero after Hurricane George washed away all our belongings. We moved back to the United States, we were homeless and had to stay in shelters till we could get back on our feet. Not only that but I had family effected on the island by Hurricane Maria luckily no one died but a lot is still under construction and times are very hard for them. I got to see that first hand when I went back to the island for my mother’s funeral. The place I called home was no longer the same and will need a lot of resources that people don’t have to fix the damage.

After my mother’s passing, I started going to therapy and taking care of my mental health. Which even where I am from is taboo and it is called a “White people thing”. I had to be tough my entire life because I didn’t have any other choice. When I started to come face to face with myself I realized that I’ve battled with important deaths that lead me to deep depressions that lead me to isolating people around me. I didn’t want to do that this time so in seeking help I learned about the You Matter Movement and saw how easy it is to sink deep into depression to the point of losing all hope for life. I’ve struggled with depression but in discovering I wasn’t alone I decided to help by learning how to prevent suicide and how to talk, teach other people ways of prevention. I became involved because I believe in mental health. It’s honestly saved me from going off the deep end especially after my mother’s death.

Aside from the release of your album, do you have another project coming up?

I’ve written a song for one of the charities I support, “Screaming for the Sun”, and we will be shooting a music video for it soon.