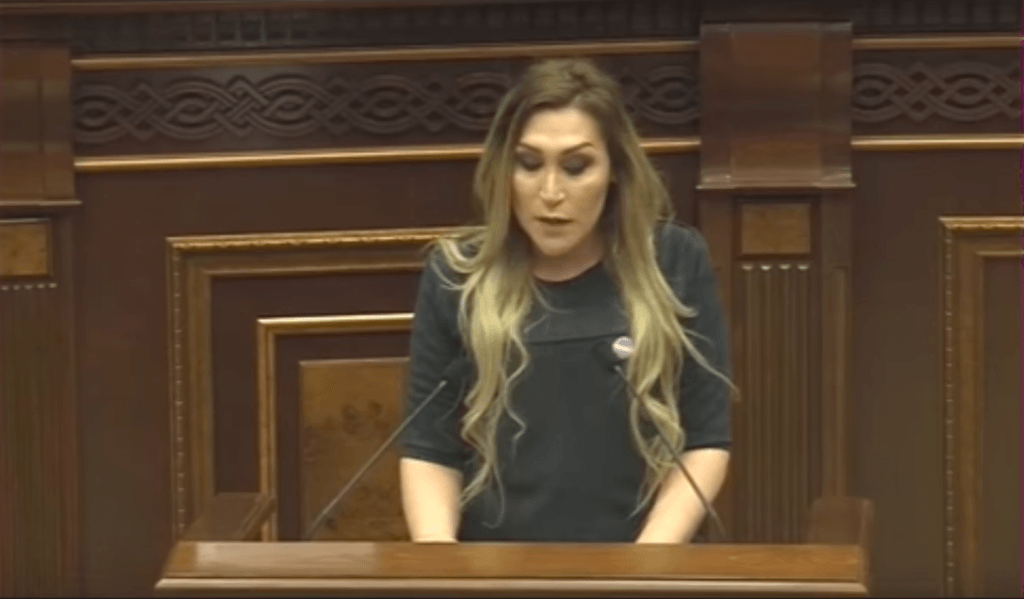 Lilit Martirosyan made history on April 5th as the first transgender Armenian woman to address the country’s parliament. Her unprecedented speech in front of lawmakers was powerful, honest and commanding.

“I stand for tortured, raped, burnt, stabbed, killed, banished, discriminated, poor and unemployed transgender people of Armenia,” Martirosyan, an activist for transgender rights, told the lawmakers at an April 5 hearing on human rights. She went on to say that hate crimes against transgender people mostly go unpunished. “I call upon you to carry out reforms and policies to achieve gender equality, and to ensure human rights for everyone,” she said.

Three days later, a crowd gathered in front of the parliament, with a collection of religious figures and other social conservatives condemning the speech and, according to activists, threatening violence against sexual minorities. Some of the protesters even called for consecrating the parliamentary floor to cleanse it after Martirosyan’s speech.

Some clerics concluded that the episode spoke to the fact that Armenia was becoming increasingly gay. “The number of homosexuals has increased in Armenia in recent years – a consequence of aggressive propaganda and spreading of European values – and this is a matter of concern for us,” Yesay Artenyan, a priest and spokesman for Armenian Apostolic Church, told Russia’s Sputnik news network. 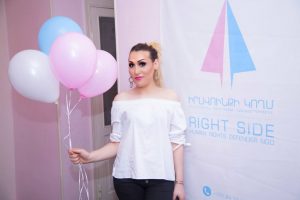 Mr. Artenyan should know that homosexuals in Armenia have not increased. Rather, they are finding the courage to speak up, take up space and demand the right to exist. LGBTQ Armenians are tired of being treated like second-class citizens, their lives threatened and openly discriminated by those they elected to protect them. If Mr. Artenyan wants to cleanse Armenia, he should look closer in his own environment where corruption, fraud, and sexual misconduct are rampant.

Predictably, Nikol Pashinyan failed to be the Prime Minister of all Armenians by displaying his weak leadership. Instead of condemning homophobic and transphobic hate-speech, he resorted to rhetoric and mudslinging to defend his administration against the opposition.

“The transphobic backlash is taking place across social media as well as in public spaces in Armenia, endangering the lives of many people and also perpetuating a climate in which such dangerous and divisive rhetoric is viewed as acceptable,” tweeted ILGA-Europe, an LGBTI rights organization. The group called on the authorities “to speak out against this transphobic hatred; on the police to ensure the safety of those being threatened; as well as on the media to avoid spreading misinformation and providing a platform for hatred.”

Often we don’t know the heroes among us until much later when they have endured pain, suffering and the challenge of carrying the burden of their community. We wait too long to realize their sacrifices, exceptional character and resilience. Until the dust settles, hypocrisies are revealed and true leaders emerge, Martirosyan will go down in history as the Joan of Arc of Armenia’s trans and larger LGBTQIA movement.

Mr. Artenyan, Prime Minister Pashinyan and all those who are equally transphobic and homophobic, LGBTQIA Rights Movement is about this: THE RIGHT TO BE AVERAGE.

FILM REVIEW: JORDAN PEELE’S “US” IS A STANDOUT HORROR FILM SiriusXM TO LAUNCH THE ‘CHER CHANNEL’