AN ANGELINO IN DEUTSCHLAND 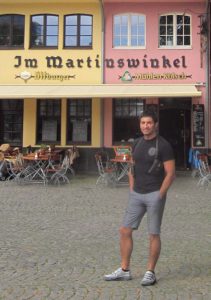 It’s rare for me to imagine moving out of Los Angeles—especially to another country—as I’m a proud and happy Angeleno, so imagining a move to Germany came as a surprise on my recent trip. I didn’t prepare or do a great deal of research before visiting the German cities of Berlin and Cologne last year, as I’m not a fan of rigid itineraries and overplanned agendas. I also didn’t want preconceived ideas inhibiting my experience, which allowed me to have the time of my life.
I flew Air Berlin (airberlin.com) from Los Angeles, which offers direct flights to several cities in Germany and routes throughout Europe. Transportation within Germany was just as top-notch and efficient as my cross-Atlantic flight, as I had a subway card with unlimited travel privileges.
I was staying in a four-star hotel in former East Berlin, far from the historic gay epicenter, but it didn’t matter. Younger generations of gays tend to live and play in these types of developing neighborhoods rather than the established gay ghettos. Berlin’s queer community, with its rich history and lasting legacy, now has its first openly gay mayor.
Traditional gay neighborhoods are the districts of Schöneberg and Kreuzberg in the formerly Western part of the city, as well as Prenzlauer Berg in the East. Recently, the district of Friedrichshain has emerged as another gayborhood with more upscale and edgy hangouts. The majority of gay hotels, bars, cafés and shops in Berlin are located in the Schöneberg district, which had dance halls for men way back in the 1920s.
Major events to consider when planning your vacation are the Berlinale Film Festival in Feb- ruary—which includes queer film award The Teddy—Fetish Week over Easter, June’s gay and lesbian street festival in Berlin-Schöneberg, the gay Pride parade later in the same month and Folsom Europe in September.
One of my best decisions was to take a private, English-speaking tour offered by a very friendly and knowledgeable guide, Guy Laurie with Enigma Tours (englishtoursinberlin.com). Guy’s expert knowledge of Berlin’s history, architecture and socio-economics was complemented by his witty and charming commentary. We visited major landmarks, including the Nazi party head- quarters, notable government buildings, historic sites and the Holocaust Museum. 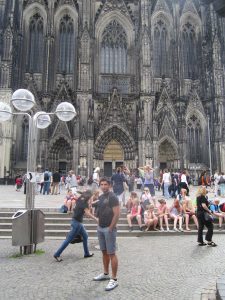 Berlin’s rich, dense and diverse offerings can satisfy any visitor with the city’s countless art galleries, world-class restaurants, shows, exhibits, beautiful parks, cafés and bars. I enjoyed several exquisite meals at traditional German restaurants, but also at Italian and various other ethnic eateries.
I didn’t want to leave Berlin too soon, but one would have to stay months or live there to fully absorb the city and its majesty. I had a first-class express train ticket to Cologne and took full advantage of the ride, talking to Germans from different cities and enjoying the lush and beautiful scenery.
Cologne is not as large or expansive as Berlin, but it’s equally impressive and has just as much if not more to offer. This stunning college town by the Rhine River managed to take my breath away with its charming and modest layout, landmark Gothic cathedral, medieval city gates and, most importantly, its friendly and hospitable locals. 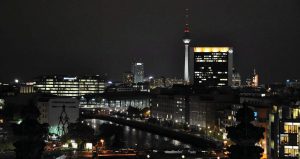 Because of Cologne’s smaller size, it’s easy and convenient to tour the city on foot. In fact, I was privileged and honored to have Dr. Stefan Rath (stefanrath@gmx.de), an art historian, as my private tour guide, whose knowledge and perspective on the city made the two-hour tour ever more enjoyable. We visited several museums and galleries in addition to a McDonald’s housing the ruins of an ancient Roman city.
Though some guides list Rudolfplatz and the Old Town as the gay parts of Cologne, the city is far too cosmopolitan, gay-friendly and integrated to have gay ghettos. Gays are every- where and regarded as an integral part of Cologne’s society. It was host to the Gay Games in 2010, which cemented Germany’s fourth largest city as a gay haven and major player in the country’s pink economy.

My last days in Cologne were during gay Pride in early July, called Christopher Street Day. On Friday of the three-day festivities, I was invited to attend the official fetish ball, held at an aban- doned warehouse across the river, which I reluc- tantly accepted. I have a policy to try everything once before judging it, and I was happy with my decision. It was extraordinary to see 2,000 men in various fetish gear in this three-story building— dancing, drinking and ‘exploring’ their sexuality. If leather and gear is your thing, don’t miss Leather Pride in May or Bear Pride in November.

If you’re planning a trip for the upcoming summer but still unsure of your destination, stop contemplating and book a vacation to Deutsch- land. In addition to its numerous offerings—a rich history, world-renowned sites, countless museums and exhibits, charming people and year-round festivities—you just might find German men irresistible too. Their rugged good looks and athletic bodies are complemented with rare and refreshing directness.
For additional information, comprehensive resources and inspiration, I highly recommend the websites for the German, Berlin and Cologne Boards of Tourism. When choosing an airline, check out Air Berlin, as their direct flights, quality of service and efficiency is unparalleled, making it your best choice when traveling to Germany. Last, don’t forget to book a tour guide, as both of mine were priceless.
Gute Reise!