Arman Tatoyan, the Human Rights Defender of Armenia visited and carried out surveys in the Syunik region of the Republic of Armenia, town of Kapan, as well as other towns and villages recently.

From September 27 to November 10, the Armenian Republic of Artsakh (Nagorno-Karabakh) in the South Caucasus was exposed to a genocidal assault at the hands of Azerbaijan and Turkey. The entire world watched while the aggressors committed many crimes and indiscriminately shelled the indigenous lands of Armenians.

Turkey also sent Azerbaijan mercenaries from Syria with known affiliations to Islamic radical groups. This was confirmed by a recent United Nations report, as well as by the testimonies of many Syrian mercenaries and reports by international media outlets.

Together with Azerbaijani military forces, they perpetrated war crimes against Armenians. They murdered civilians, injured journalists and targeted homes, forests, hospitals, churches and cultural centers, among other non-military targets. They used white phosphorus and cluster munitions in violation of international law. At least 90,000 Armenians were forced to abandon their ancestral lands in Artsakh as a result.

The war finally halted after 45 days because of the Russia-brokered agreement imposed on Armenia. 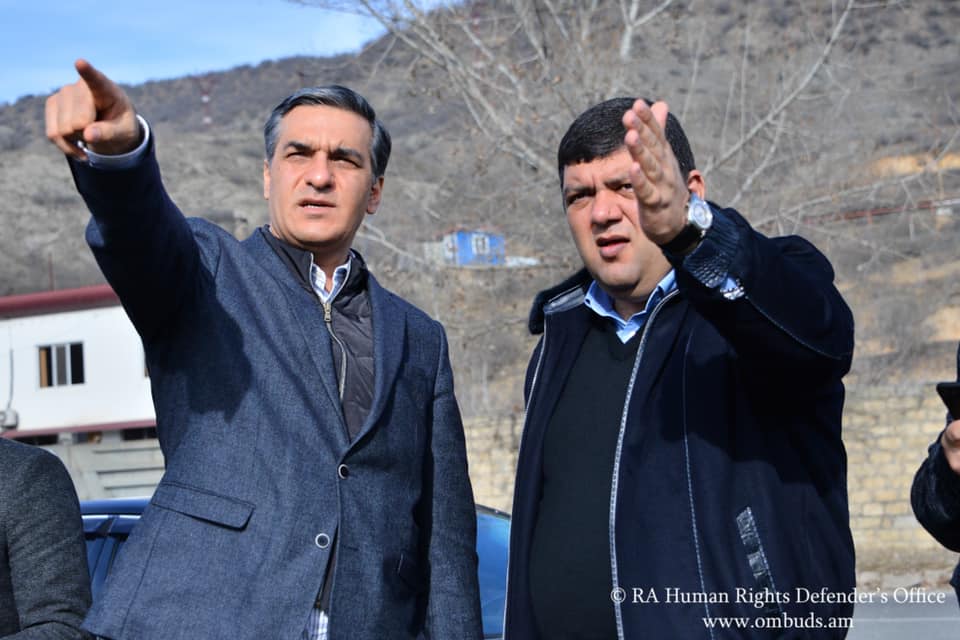 Our visits continued today in the town of Kapan, Syunik region of the Republic of Armenia, Agarak, Yeghvard, Chakaten and other villages.

Surveys were carried out in the areas of the runways of the administrative building of Kapan airport, in the immediate vicinity of which are the Azerbaijani locations. Studies show that there are dangers not only for the Kapan airport, but also for the interstate movement from Kapan to Yerevan (M2) and several residential areas in the city of Kapan.

Today’s visits of the Human Rights Defender to the city and villages of Kapan show that as a result of the approaches and methods used thus far, and especially the mechanical use of Global Positioning System (GPS) or Google maps, there are serious threats to the right to life and security of border residents, for their physical security, for their mental health and immunity, and for other rights of vital importance guaranteed by the Constitution of the Republic of Armenia, some of which have already been grossly violated. The security of the RA state borders is endangered. 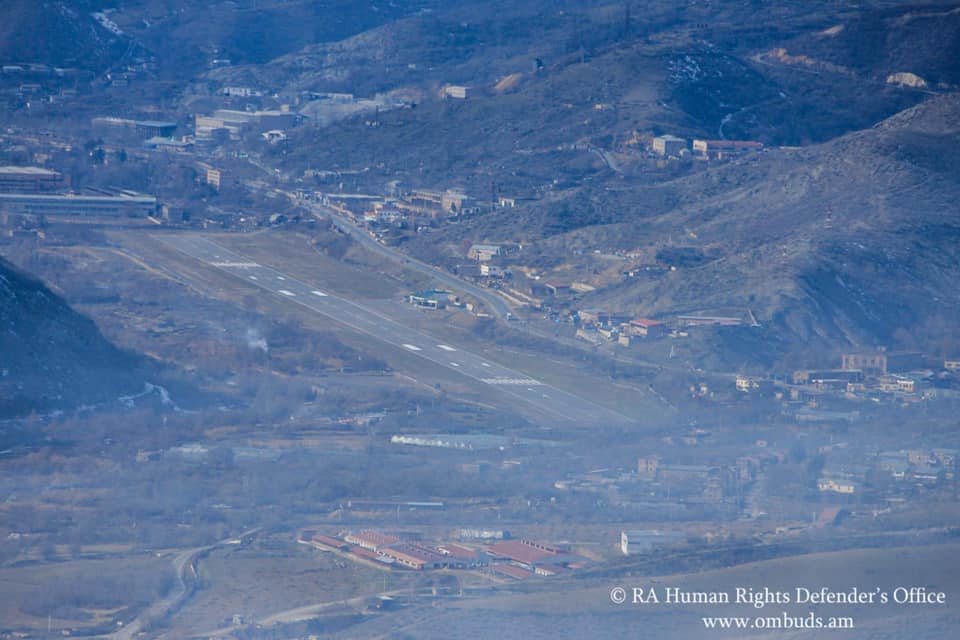 By mechanical application of these principles, various sections of the road from Kapan to Chakaten and other villages have come under Azerbaijani control, which has put the movement of civilians in real danger. At the same time, it must be considered that this road is absolutely necessary for the security of the villages of Chakaten, Shikahogh, Srashen, Nerkin Hand, Tsav, and for the vital rights of the inhabitants in the region.

In addition, for example, in Chakaten, Agarak and Yeghvard, people have simply been deprived of the opportunity to support themselves, and of the use of the agricultural lands owned by them, and of their rights (for example, for private or economic purposes as a garden, arable land, or pasture). Moreover, these infringements also refer to such lands, for which the certificates confirming the state registration of such rights, including property rights, were issued either by Soviet Armenia, or by the competent bodies of different periods of the Independent Republic of Armenia (Cadastre Committee, etc.).

All the while, international rules of delimitation directly require that when determining the state borders of a country, priority should be given to the rights of border residents, their real estate and/or other property. It is of critical necessity to ascertain in advance the persons who will be deprived of their rights, to their apartments, lands, private business interests and objectives, and other property due to the border demarcation process. It must be borne in mind that they have a just right to compensation. 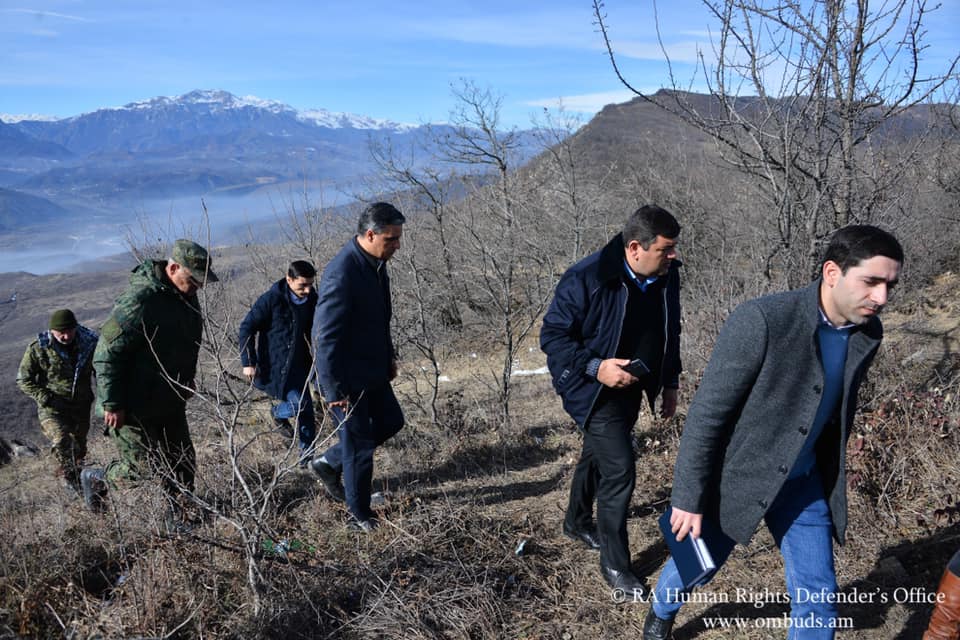 One of the priority tasks of the state in the process of determining the borders is to solve the issues of ensuring the safe use of forests and forest resources, as well as water resources necessary for the vital needs of the border residents.

Therefore, the current approaches, and especially with respect to matters of resolving the issues of Armenia’s borders through GPS [Global Positioning] system or Google (private) applications which endanger the inviolability of Armenia’s state borders and security, and to ensure the rights of people living in our country and especially those of our border residents, such a frame of reference which has been utilized thus far, is absolutely unacceptable.

Today’s meetings of the Human Rights Defender with the residents of the border villages, the discussions and studies with the community bodies confirm that the Azerbaijani military regularly appears on different sections of the roads connecting the mentioned populated regions of the Republic of Armenia and does so in a provocative manner to intimidate the residents of these communities.

The various research of the Human Rights Defender’s staff show that in Kapan, Agarak, Yeghvard and other settlements which have been transformed to border areas, the residents do not have credible information pertaining to the determination of the borders and their respective rights. This creates uncertainty, and it creates an atmosphere of alarm and anxiety among civilians.

During today’s visit, important meetings were held with the Mayor of Kapan, Yeghvard, Agarak, and heads of several other rural communities, community bodies, and the residents of these communities, as well as the staff of the RA Armed Forces and the NSS border troops.

During today’s visits, the Human Rights Defender’s Office also obtained the relevant facts necessary for the protection of human rights in specific situations, in connection with which separate summaries will be made and the necessary measures will be taken.