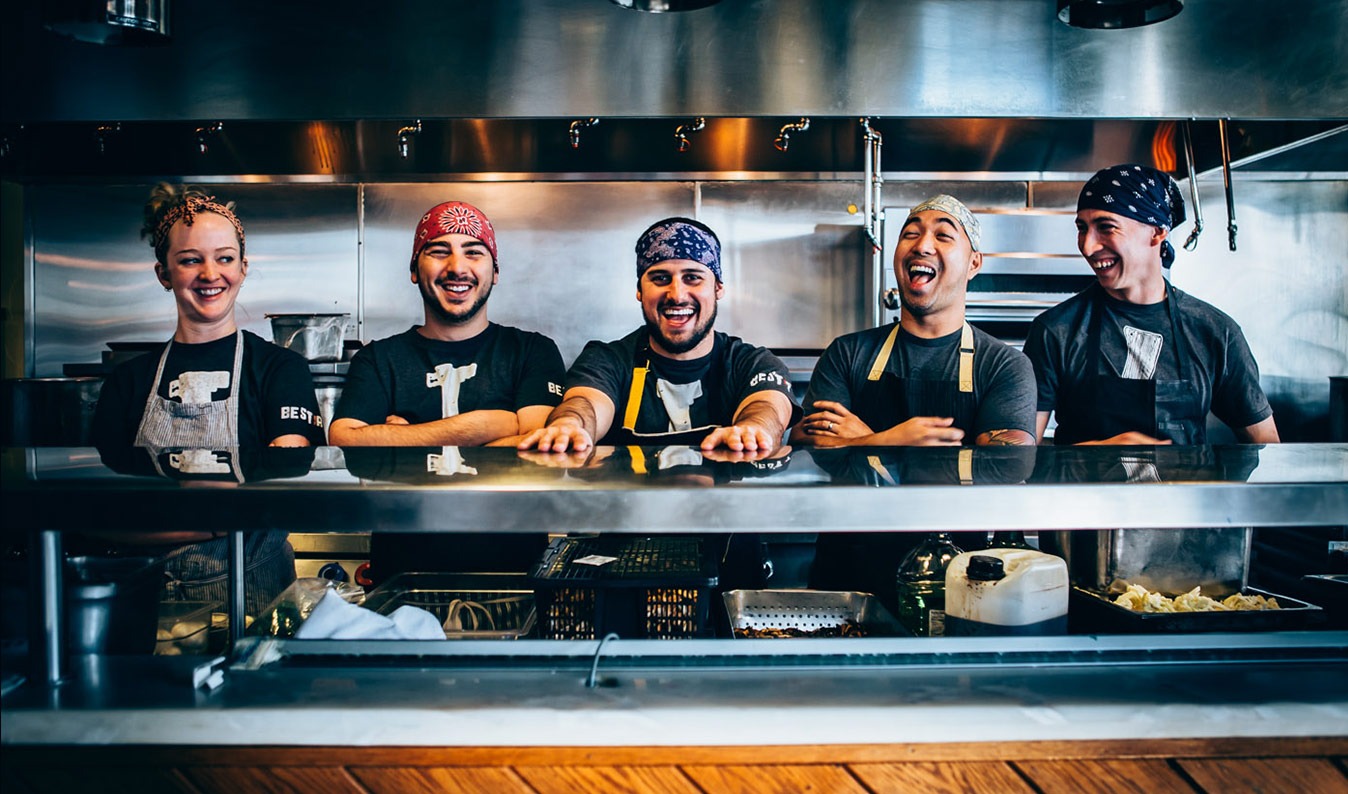 The concept for Bestia juxtaposes decorative contemporary elements against a raw, industrial space dripping with character. This approach pays homage to sophisticated modern-day Italian spaces, which often integrate contemporary interiors into centuries-old structures. Strong, traditional building materials such as tile, steel, marble, and wood also provide pops of festive color. The name Bestia (Italian for “Beast”) echoes throughout the space via hard-edged design elements, such as the wall covering’s pattern of bar-fight weapons, intimidating meat-hook chandeliers suspended from soaring steel tracks, and bathroom tile work that reads as unfinished. The repeated use of chevron and hexagonal patterns, tulip pendant lighting, warm amber tones, and airy booth seating help soften the aggressively industrial space with a bit of whimsy. The distinctive booths, engineered and built by District Millworks, feature seats that appear to defy gravity. A raw-copper bar top provides a canvas that will be ever-changing throughout its lifetime as it reflects the craft of creating artisanal cocktails. 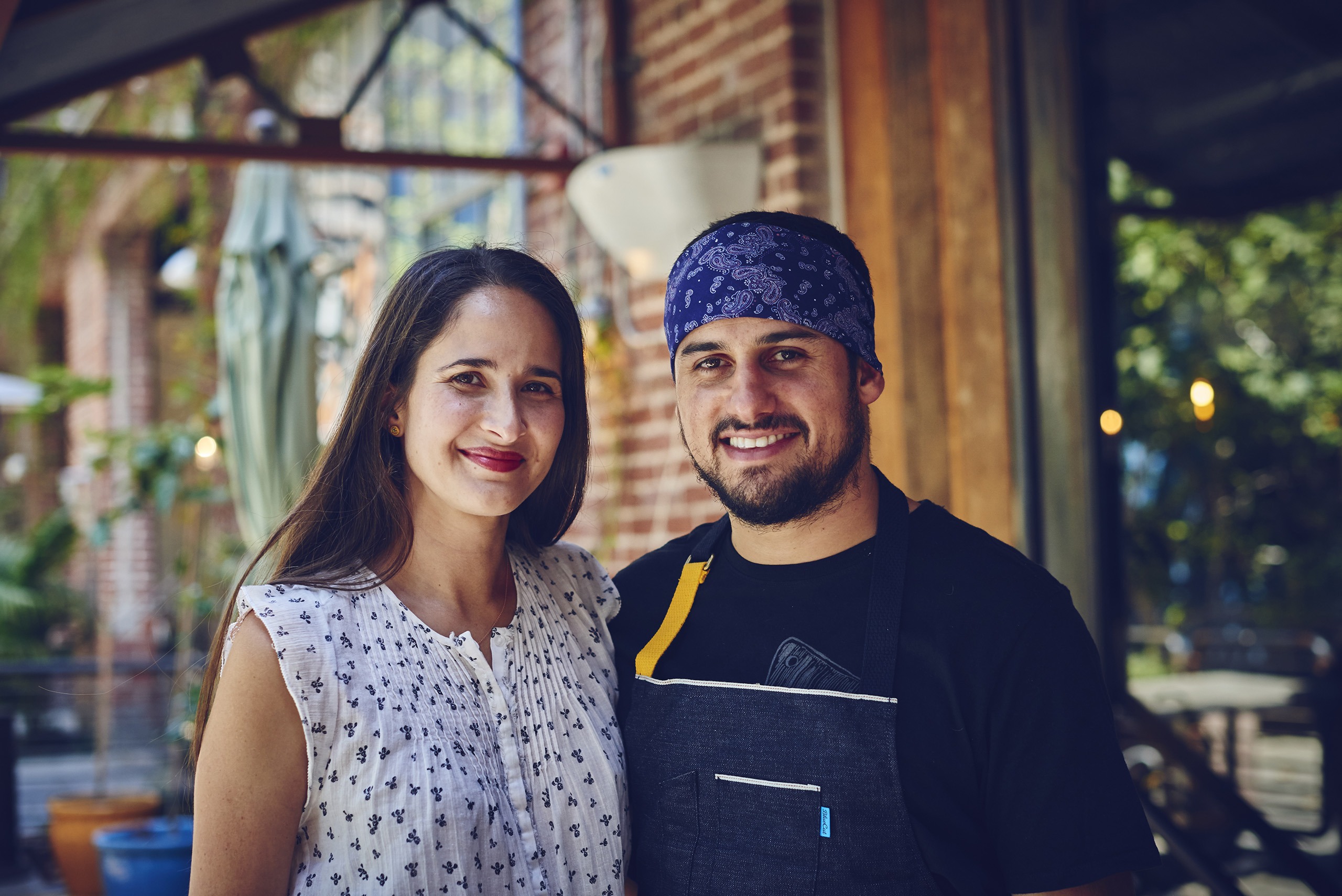 Ori Menashe and Genevieve Gergis were both born in the Los Angeles area, however, while Gergis stayed in Southern California, Menashe and his family moved to Israel where he would spend his formative years.

Menashe grew up traveling with his family and was exposed to fine dining across the globe, but it wasn’t until his yearlong sojourn to South America with friends, when he realized his passion for cooking. Meanwhile, Gergis, a self-taught pastry chef and started baking out of necessity of satisfying her dessert cravings while studying to be a classical French horn player.

Menashe returned to Los Angeles from South America in 2001 to pursue a culinary career. He landed his first kitchen job at an Israeli cafe and then subsequently took a job at La Terza, where Gergis was a hostess and they met for the first time. From there, Menashe spent time in the kitchens of Nancy Silverton’s Pizzeria Mozza, All’ Angelo, and under legendary chef Gino Angelini at Angelini Osteria, where Menashe worked for four years as chef de cuisine. 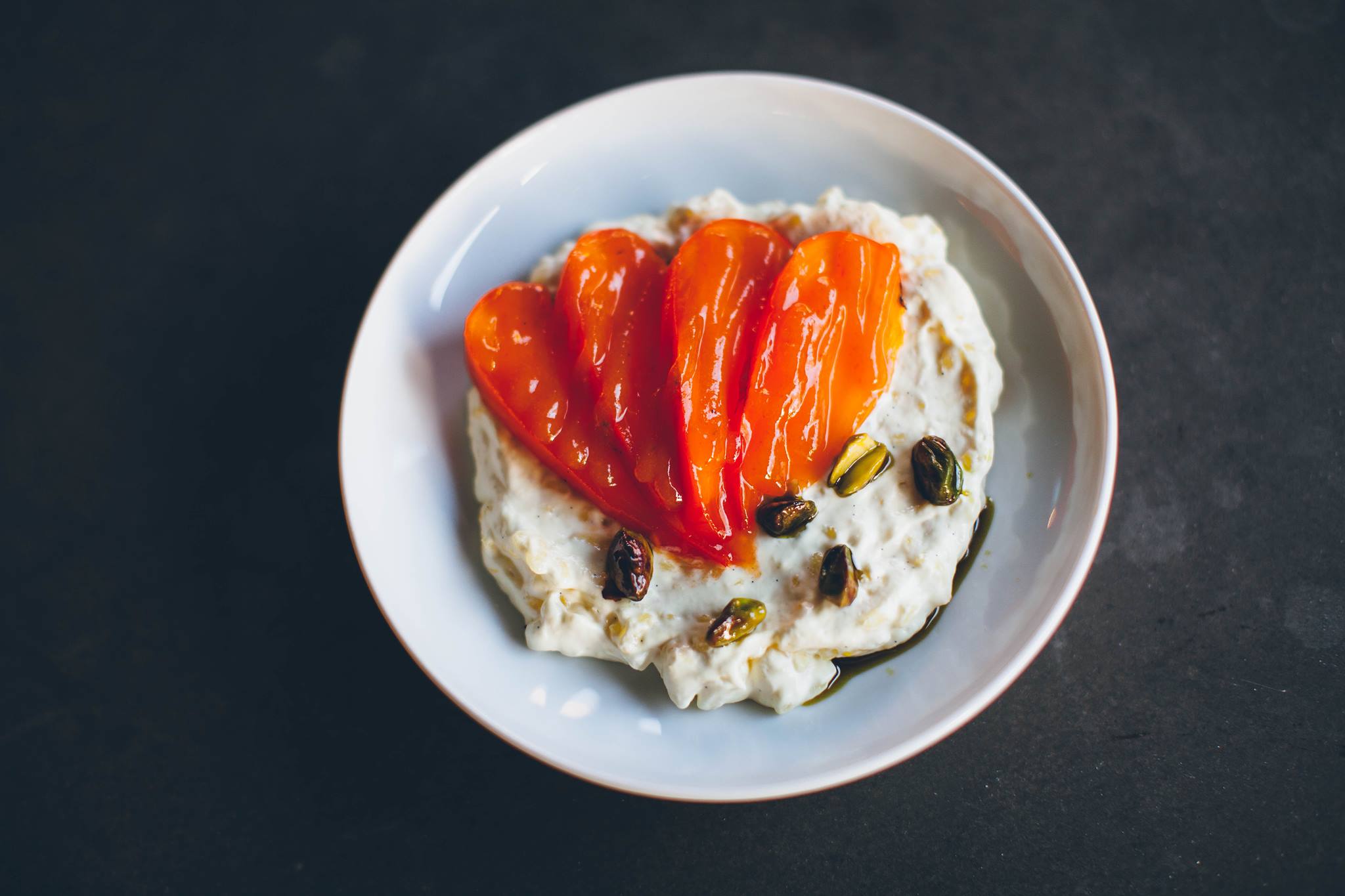 In 2010, Menashe and Gergis decided it was time to pursue their long awaited dream of opening a restaurant together. With a background in the field of interior design and furniture, Gergis played a key role in the design of Bestia and began working towards building a front of the house career. As time went on, that decision took a sharp turn when just a few months prior to opening in 2012, her obsession with sugar and her husband’s love of her desserts took reign and it was decided that she would take on the role as pastry chef.

At Bestia, Menashe and Gergis work alongside each other to create a true husband and wife restaurant. Bestia is a multi-regional rustic Italian restaurant focusing on a “from scratch” approach, offering house-made charcuterie, in addition to handmade pastas and pizza made in an Acunto oven. On the pastry side, Gergis’s desserts focus on a clean and simple approach to create a daily changing menu that is centered on the freshest, most local ingredients possible.

In 2013 Bestia received praise from Los Angeles Times’ Jonathan Gold; three stars from Besha Rodell at LA Weekly; and three stars from Patrick Kuh at Los Angeles Magazine which would then declare Bestia one of the Top 10 Best New Restaurants that year. The restaurant gets consistent recognition by Jonathan Gold for his annual Gold List, and Besha Rodell for LA Weekly’s Essentials list. In 2014, Menashe was named the People’s Best New Chef, California for Food & Wine and in 2015, he was honored among Food & Wine’s ten Best New Chefs. When not in the kitchen, Menashe and Gergis can be found spending time with their daughter Saffron.