Catch Me If You Can, I Robot Executive Producer Michel Shane Unveils New Documentary 21 Miles In Malibu

Catch Me If You Can, I Robot Executive Producer Michel Shane Unveils New Documentary 21 Miles In Malibu

Feature Documentary About the Iconic Pacific Coast Highway, One of the Deadliest Stretches of Asphalt on Earth.

Michel Shane, executive producer of Catch Me If You Can and I Robot, has completed production on the documentary 21 Miles in Malibu, the filmmaker’s passion project created to bring awareness to the dangers of the iconic roadway, the Pacific Coast Highway in Malibu, California.

Stretching 21 miles along the beautiful Malibu coast, the Pacific Coast Highway (also known as the PCH) has proven to be one of the most deadly stretches of asphalt on Earth. The documentary follows the incredible history of Malibu, the story of the Pacific Coast Highway, and the people that have been most affected by it all. It shows the dichotomy of this small town – a seemingly idyllic paradise that is being devastated by a high-speed highway ripping through its heart. The film chronicles the lives of some of those affected, including Michel and Ellen Shane, whose daughter Emily tragically murdered after a suicidal driver aimed his car at her on the PCH, further exemplifying the dangers of the frequently traveled road and leaving viewers wondering why stricter regulations are not in place to prevent future damage. 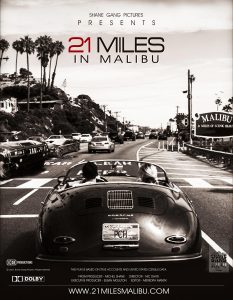 Davis’ statement: “21 Miles in Malibu is about a lot more than the Pacific Coast Highway. It highlights the juxtaposition between one of the most iconic places in the world, and one of the deadliest. I was compelled to make the film after hearing Michel Shane’s story about  his daughter, Emily. We’ve all heard stories about road violence and tragedy, but it doesn’t feel real until it happens to you, or someone you know. I believe this film exemplifies the power of the documentary medium, and hopefully, its ability to cause change. 21 Miles in Malibu engages the audience with the stereotypical image of Malibu, and then surprises, with a dreadful underbelly few know about. My goal was to create something shocking and visceral, but also capture subtle emotion, particularly of those affected by tragedies that have happened on this stretch of highway. It’s not easy making a film about a road. But this is no ordinary road. If the film speaks to you, I encourage you to explore ways to take action to make this highway, and all others, a little safer.”

Michel Shane explains his reason for making the film: “This story is not a pleasant one; it was a life-changing moment for my whole family and me. On April 3, 2010, my youngest child Emily was at friends having had a sleepover. It was spring break. We were planning to go to a film. Emily called and asked to be picked up. She had enough and wanted to come home to do something else. I asked if she could wait about 20 minutes as I had some work, and she said she would rather not, so I went to pick her up. While waiting for the light to change so I could turn on the PCH, I saw a car speeding and driving crazily. I shook my head in disbelief. Well, that car, that driver, took my daughter’s life. He pointed the car at her and killed her while trying to commit suicide. He lived. She did not. This was life changing. My 13-year-old daughter was gone, and in a split second, my life was changed forever.”

Shane is currently appealing to the State of California Parole Board to keep the criminal driver behind bars.

21 Miles in Malibu is being submitted to festivals worldwide and will be available soon on the major streaming platforms. Special screenings are also planned.  Michel Shane was a featured panelist on the fifth annual Production Without Borders event held during AFM on November 6, 2022.

Canadian-native Michel Shane has been a successful entrepreneur for more than 30 years, having achieved great success in the film industry as a movie producer and founder at Shane Gang Pictures. He is best known for his work in developing, creating, and executive producing the blockbusters Catch Me If You Can and I Robot, and financing Northfork, to name a few.

Michel is the Chair of The Emily Shane Foundation. In 2015, he received a Lifelong Achievement Award from President Barack Obama.