On Thursday, June 11 at 8:00 p.m. ET, the Central Conference of American Rabbis (CCAR) and the Human Rights Campaign (HRC) will co-host “PRIDE INSIDE, Where Pride Dwells: An Interfaith Discussion and Celebration of LGBTQ Spirituality.” This open dialogue among Jewish, Muslim, and Christian faith leaders and LGBTQ activists will focus on inclusion, compassion, challenges, and the lived spiritual experience of the LGBTQIA+ and non-binary communities, including how these experiences have changed amid the ongoing pandemic.

The virtual panel will be moderated by Rabbi Denise Eger, a renowned activist and leader in the LGBTQ Jewish community and author of the groundbreaking new book, Mishkan Ga’avah: Where Pride Dwells, A Celebration of LGBTQ Jewish Life and Ritual. Rabbi Eger, who is also the founding rabbi of Congregation Kol Ami, West Hollywood’s Reform Synagogue, and served as the first openly LGBTQ President of the CCAR, will also share readings and insights from the book during the discussion. The event, part of the global online celebration of Pride month replacing the traditional in-person marches and events this year, will feature introductory remarks from CCAR Chief Executive Rabbi Hara Person and HRC President Alphonso David.

Mishkan Ga’avah: Where Pride Dwells, a groundbreaking collection of LGBTQ prayers, poems, liturgy, and rituals is both a spiritual resource and a celebratory affirmation of Jewish diversity. Giving voice to the private and public sectors of the queer Jewish experience, the book is also a commemoration of the 50th anniversary of both the Stonewall Riots and the first Pride march, reflecting the longtime advocacy of the Reform Movement for full LGBTQ inclusion.

“Mishkan Ga’avah is a visionary guide to LGBTQ inclusion within the Jewish community. The Reform rabbinate has a long history of support for LGBTQ equality—due in part to Rabbi Eger’s extraordinary leadership and LGBTQ advocacy in the Jewish and secular world,” said Rabbi Person. “It is my hope that this book finds a sacred place in Jewish homes, synagogues, and in the hands and hearts of everyone in the LGBTQ community and in the Jewish community, and it is an honor to join Rabbi Eger, the Human Rights Campaign, and our allies in the Muslim and Christian world to come together for an uplifting interfaith evening celebrating the spirituality and faith of the LGBTQ community.”

“As LGBTQ people celebrate Pride — while physically distancing due to COVID-19 — we must continue to explore and expand the ways we can come together to uplift our community, including through faith,” said David. “Justice and equality for all members of our community is our goal and we must continue to find common ground between LGBTQ people and people of faith who share that goal. This event with the Central Conference of American Rabbis moves us all closer to our shared goals of justice and equality and mutual understanding. I look forward to celebrating Pride with people of all faiths throughout this Pride season.”

More details about the event are below: 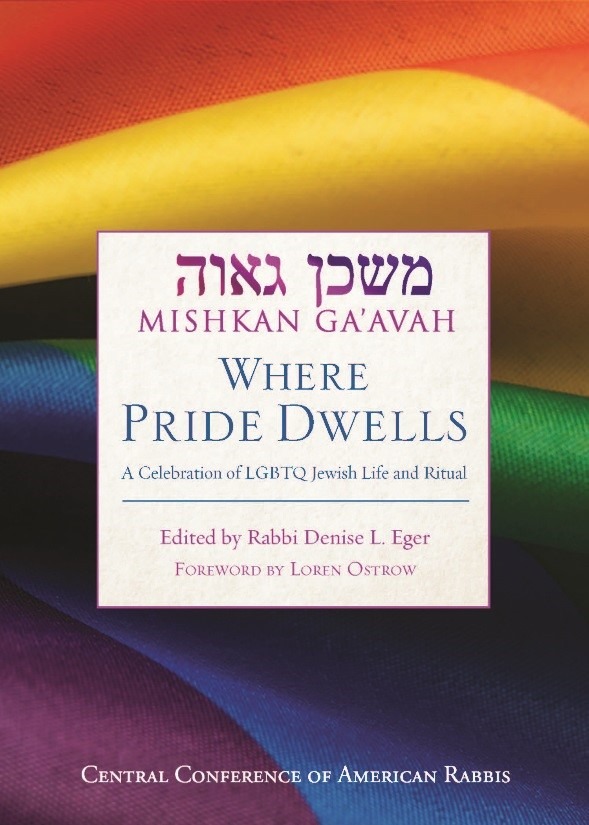 WHAT: An interfaith discussion and celebration of LGBTQ spirituality among Jewish, Muslim, and Christian faith leaders and LGBTQ activists

WHERE: Zoom video conference (click here for more details and to RSVP)

About the Central Conference of American Rabbis

The Central Conference of American Rabbis is the Reform rabbinic leadership organization. The CCAR strengthens the Jewish community by providing religious, spiritual, ethical, and intellectual leadership and wisdom. CCAR and its members lead the Reform Movement on important spiritual, social, cultural, and human rights issues, as it has done since 1889. CCAR also is the center for lifelong rabbinic learning, professional development, and resources for the 2,300 rabbis who serve more than 1.5 million Reform Jews throughout North America, Israel, and the world. Since its founding, the CCAR has also served as the primary publisher of the Reform Movement through CCAR Press and its imprint Reform Judaism Publishing.

CCAR Press is the official publisher of the Reform Movement and a division of the Central Conference of American Rabbis. Since 1889, the Central Conference of American Rabbis has been a center for lifelong rabbinic learning, professional development, and publishing for the 2,300 rabbis who serve more 1.5 million Reform Jews throughout North America, Israel, and the world. CCAR Press publishes liturgical resources and texts on Jewish practice that serve its member rabbis, the Reform Movement, and the Jewish community as a whole. CCAR Press, through its trade imprint Reform Judaism Publishing (RJP), is the steward of the Reform Movement’s sacred texts, including its Torah Commentaries and prayerbooks. In addition to books, CCAR Press publishes CCAR Journal: The Reform Jewish Quarterly, and a wide-range of electronic resources, including e-books, apps, and Visual T’filah.

The Human Rights Campaign is America’s largest civil rights organization working to achieve equality for lesbian, gay, bisexual, transgender, and queer people. HRC envisions a world where LGBTQ people are embraced as full members of society at home, at work, and in every community.