Croatia Earthquake: How You Can Help

The Croatian government on Wednesday declared January 2, 2021, a national day of mourning and opened a state treasury account for helping those affected by Tuesday’s earthquake. Prime Minister Andrej Plenkovic appealed to citizens to be careful due to the appearance of fake donation accounts.

Tens of thousands of people have been left homeless after the powerful 6.4 magnitude earthquake that rocked central Croatia, killing seven and injuring dozens. The quake, the second to hit the area in two days and the strongest recorded in the country in 140 years, killed at least seven people and left dozens more with broken bones, concussions, and other injuries.

Thousands of people were being housed in temporary shelters in nearby sports arenas and army facilities but some residents refused to leave. The earthquake on Tuesday was the strongest to be recorded in Croatia using modern measurements, though the region has experienced powerful tremors earlier in its history.

Tomislav Fiket, a Croatian seismologist, told state TV that more aftershocks could be expected and that caution was needed in the recovery efforts.

“All these earthquakes hitting already-damaged buildings can cause greater damage or bring them down,” he said.

Even as aid workers rushed to the area, strong aftershocks rocked the worst-hit town of Petrinja, as well as neighboring Sisak and Glina, about 30 miles from the capital, Zagreb.

He and the ministers observed a minute’s silence for those killed in the magnitude 6.2 quake in Sisak-Moslavina County.

“We sympathise with the families of those killed and those wounded,” Plenkovic said.

One girl was killed in Petrinja, five people in Majske Poljane near Glina, and one person in Lekenik. Twenty-six people have been injured and the police, Civil Protection, firefighters and people who came to help are searching the rubble, Plenkovic said, thanking them.

The government has opened a state treasury account “to help those affected, an expression of solidarity,” he said, adding that Croats in Croatia and expats were interested in helping. He said great support was extended yesterday by friends and partners across Europe and the world who wanted to help, thanking them.

“This is an opportunity for Croatia to once again show its big heart, care for others and empathy,” Plenkovic said, especially appreciating the people in many cities and counties who want to help Petrinja, Sisak and Glina.

He recommended that this aid be organised and structured via the Civil Protection. “All together, we will organise via the Red Cross that the aid be distributed evenly and that it reach even the tiniest hamlet… where fellow citizens have been affected by the earthquake.”

The earthquake happened at a pivotal time when Croatia’s tourism industry in booming due its popularity and the nation’s measures to curb COVID-19 to keep its citizens and visitors safe. Croatia has been a top destination for over a decade attracting travelers that used to opt for the French Riviera, Greece, and Italy. In recent years, it has also become a popular location with Hollywood studios and networks for location shoots.

Please see the below official information from the government of the Republic of Croatia about how and where to make a donation. 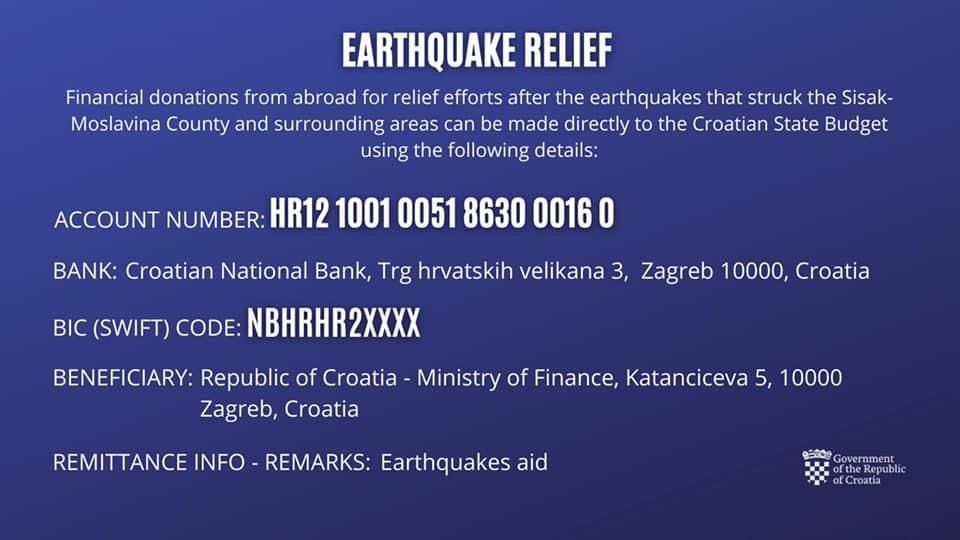 The government on Wednesday declared January 2 a national day of mourning and opened a state treasury account for helping those affected by yesterday’s earthquake, with Prime Minister Andrej Plenkovic appealing to citizens to be careful due to the appearance of fake donation accounts.
30.12.2020.

Croatia was hit by two strong earthquakes in the past 36 hours. The town of Petrinja, 36 miles from the country’s capital Zagreb, suffered the most damage (6.2 on Richter scale), and surrounding towns and villages were also devastated. Croatia’s capital Zagreb suffered significant damage too. Many people have lost their homes and the crisis is even harder because of the Covid-19 pandemic and the winter season.
Croatian government has just formed the official relief fund account for donations which are desperately needed for the immediate relief purposes. Hereby, I kindly ask you to donate if you can in this extraordinary time of need in Croatia.
Thank you and stay safe!

Film Review: Wonder Woman 1984: The Truth Is That We Deserved Better Film Review: ‘Into The Night,’ Poland’s Lesbian Themed Sensation