“Sepi has been a wonderful friend for many years now, originally when she chaired the HRC LA Gala. Our friendship has grown over the years. I believe in her. She is very capable and will be an asset to West Hollywood,” said Valerie Milano.

Among many LGBTQIA+ notables and activists will be the iconic pioneering lesbian comedian and activist, Robin Tyler, who will introduce Sepi. There will be performances by singer Jennifer Corday and by comedian Jackie Steele. In addition, other notable guests include Palm Springs residents Sue Burnside, who is on the boards of Equality California, LGBTQ Victory Fund, and OutRight Action International.

‘I am excited about the endorsement from Feminist and Lesbian ICON Robin Tyler who spoke in support of our campaign at the kick-off. The excitement and support we received is a huge boost to our campaign and I am ready to Shyne all the way to November 3, 2020, to win a seat on West Hollywood City Council,’ she added.

As an activist with a social justice platform, Tyler’s endorsement is especially important for Sepi. If elected, she will be only the second lesbian on the West Hollywood City Council in its 35-year history.

I interviewed Tyler for this story to find out why Sepi’s election to the WeHo City Council was important to her. Tyler feels that West Hollywood needs change and Sepi is the right person to be elected. She is disappointed by the West Hollywood City Council’s decision last year to allow the screening of the documentary, ‘1948: Creation and Catastrophe.’ Robin told me that an antisemitic documentary should not have been screened by the City of West Hollywood. She discussed two Councilmembers, John Duran and John Heilman, both of whom had voted to allow the screening.

“We all went to the City of West Hollywood. I think 75 or 80 Jewish people from Iran, Persian Jews, showed up to ask them not to show. it’s terrible to show something that you know, that incites people against other people. But Duran voted for it and so did Heilman. And she (Sepi) is running against those two. Well, a couple of months ago there were antisemitic writings on businesses in West Hollywood. When you support hate speech, there are consequences. And the fact that they supported, it really offends me as a Jewish person. There’s a large Jewish community in West Hollywood and I am hoping that all of them rally behind Sepi.”

She also discussed the absence of lesbians and on the City Council for the last 35 years, and the lack of real diversity in general. Valerie Terrigno was the first and only lesbian elected to the first City Council of West Hollywood when it was incorporated in 1984.

“First of all, I’m tired that it’s been 34 years since a lesbian has been on the Council in West Hollywood, they don’t have people of color. Everybody always talks about racism or sexism or inclusion until it comes time to include. And then all of a sudden, the same people, lock in the same job and, it’s grossly unfair.”

‘Here we have a woman running, of Iranian descent, who came to this country, who was an undocumented immigrant, whose family had to begin again, who became an attorney, who is popular and progressive and political and loving and caring. And it’s time. So, to have this brilliant candidate, who’s got personality and smarts and politics and is a woman, and a person of color, and educated and an activist is wonderful. West Hollywood is going away with everything. The developers are beginning to own it, that she’s not accepting money from developers. Right. So, it’s time for a breath of fresh air in West Hollywood.”

Sepi has refused to accept any donations from developers. “I am running to serve West Hollywood residents and to put your needs first. I am not accepting a single penny from developers,” said Sepi.

Sepi’s activism started in college. After graduation from law school, Sepi was elected to the board of Bay Area Lawyers for Individual Freedom. She moved to Los Angeles in late in 2007 and was elected to the LA board of the LGBT Bar Association, and then co-president in 2008. In 2009, she joined the Human Rights Campaign. In addition to her advocacy work with HRC, Sepi was appointed to the City of West Hollywood’s Lesbian & Gay Advisory Board. As a member of the board, she helped to organize the world’s first city-sponsored Bisexual Pride event.

Tyler continued with her impassioned support for Sepi. “There is intense sexism that exists in this country. And I know that there are some women on Council there already, straight women, but it would be really nice if we had the representation of a very strong lesbian. And I’m not saying a strong LGBTQ person, I’m saying a strong lesbian who understands women’s issues, lesbian issues, progressive issues. I’m just tired of being invisible or represented by people that don’t represent us.”

“But my number one thing that I absolutely grant to support Sepi, had I had the conversation with Sepi about not showing a movie that could incite people to be antisemitic, Sepi would have listened. I don’t believe that she would have shown that movie or any movie.”

“she deserves to get in. She’s not a token. She’s much more experienced than most of them and she’s much more competent. So, it’s time that we broke that barrier.”

For more information about Sepi Shyne or to purchase tickets for the event, please visit SepiShyne.com 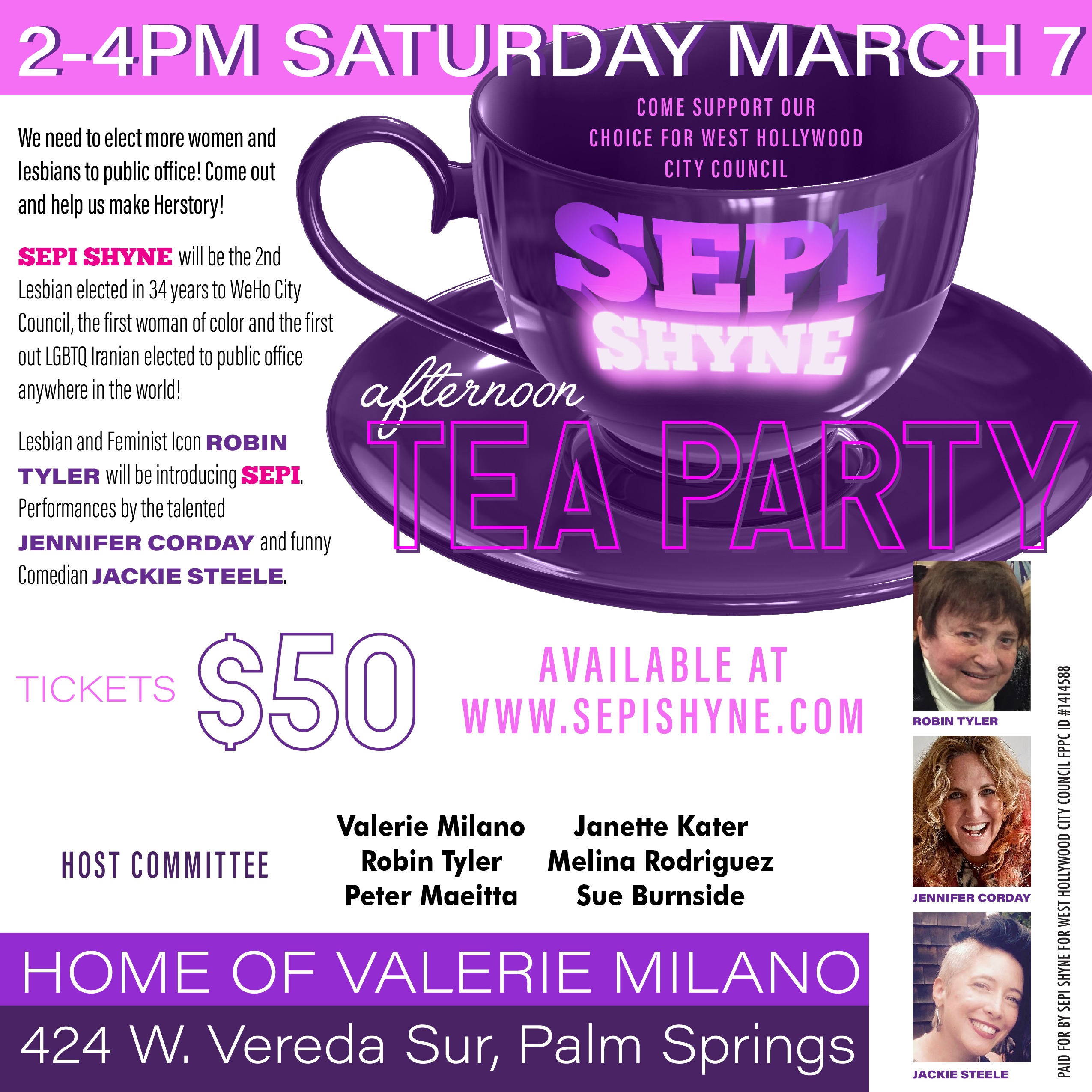