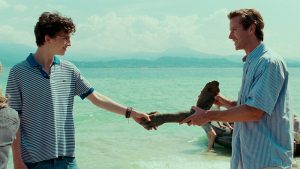 I just watched another exceptional Oscar-worthy performance tonight: notice that I didn’t say “film” as “Call Me by Your Name”, though an overall decent film, did not live up to its star’s potential.

Timothée Chalamet’s stunning performance is disproportionately superior to the film’s writing, directing and overall storyline. Furthermore, the dynamic of Chalamet’s character and his parents was overwhelmingly outstanding and made his love affair, the central element, far less interesting.

Aside from Chalament’s brilliant performance, a final scene between him and his father on a sofa was the crowning achievement. It was a beautifully written multi-layered and poetic scene about love-all kinds of love. It is a scene that acting students all around conservatories will use for their scene-study classes for years to come.

Thirty minutes of redundancies could have been cut that made the beginning very slow. The soundtrack was terrible. Not only did it not enhance the story, but it was a distraction. For the sake of creating original music that was period-appropriate, the composer’s choices were choppy and awkward.

Finally,  Timothee Chalamet’s performance makes one wonder how an actor that young can create such a densely textured and painfully charismatic character that made most of us cry. He slowly and delicately makes you fall in love with him by showing you all of him-youthful innocence and immaturity, intellect, blunt honesty, cockiness and just enough sexiness. His acting chops are more apparent when the camera zooms on him while other characters are talking. You can feel what he is feeling and can almost hear his inner dialogue. In the aforementioned scene, his father does most of the talking, but it is Chalamet that tells the story. Likewise in the final scene, you watch him sitting quietly in front of a fireplace as he takes you through a journey of emotions while you both weep. It is a journey that all of us who have been in love are familiar with-love, pain, sorrow, endearment and sweet memories.

I hope the Academy recognizes his extraordinary performance by rewarding him with a nomination.