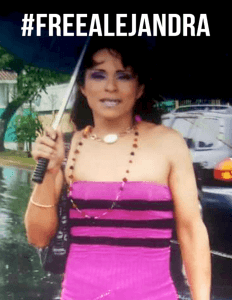 Alejandra is a 44-year-old transgender woman from El Salvador who requested asylum at the U.S.-Mexico border in November 2017 but has been held in immigration detention by ICE ever since.

Alejandra is a transgender Latina immigrant who was forced to flee El Salvador due to discrimination and violence, her home country in which she has spent years fighting for respect and dignity of transgender people.

Upon leaving El Salvador, Alejandra was detained and placed in Cibola detention facility in New Mexico. Often, transgender migrants are criminalized for fleeing violence and seeking safety in a new country and place into an immigration system that further exposes us to mistreatment. Alejandra did not choose to migrate to the US for leisure, on top of the daily discrimination, she faced extortion and attacks, including sexual assault by a gang, and by the El Salvadoran military. All of this forced her to leave and seek a new life in the US. These compounding factors are overlooked by our current immigration system, as the US focuses on punitive approaches to immigration rather than offering support and safety. She was denied asylum in June of 2018.

Since leaving El Salvador, Alejandra has not had the opportunity to rebuild her life. Instead, the US government has been keeping her detained since the November of 2017, and has denied her request to be released on parole while waiting for the decision of an immigration judge on her asylum case. Additionally, they are not providing her with access to adequate medical care and she needs treatment now.

Alejandra’s situation is not unique; there are many more transgender people seeking asylum in the United States, who are stuck waiting indefinitely in detention centers where they are at risk of ill-treatment because of their gender identity, medical needs, or trauma they have endured.

Alejandra needs help. Sign this petition and demand that ICE grant Alejandra parole and improve the treatment of people awaiting decisions on their asylum claims. 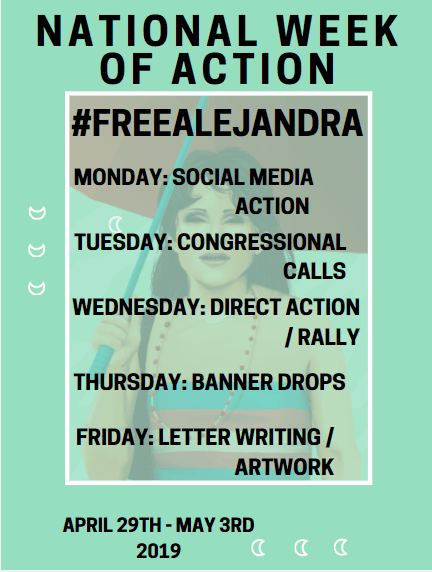 Next week,  April 29th – May 3rd is the National Week of Action to #FreeAlejandra. TLC’s FB video provides more information. The image above shows a list of actions  people can take during next week.

TLC is hosting a webinar tomorrow, Monday, April 29th at 12PM PST. The registration link for this webinar is here. 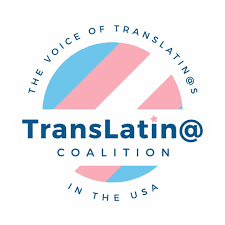 Members of the TransLatin@ Coalition are transgender Latina leaders who come together from all across the country, donating their time to organize and advocate for the issues and needs of trans Latin@ community in the United States.