VOTE FOR JASMYNE CANNICK IF YOU WANT MEANINGFUL CHANGE

The Assembly District Election Meeting (ADEM) Elections for the 53rd Assembly District will take place this Saturday, January 12, 2019, between 11AM and 1PM at the Boys and Girls Club of Estrada Courts in Boyle Heights, at 3232 Estrada Street, Los Angeles, CA 90023. The doors will open at 10AM and speeches will begin at 10:30, so plan to be there early.

Jasmyne Cannick echos a lot of people who feel that California’s Democratic Party is in the middle of a morals and values crisis. The Party no longer reflects the interests of the people it serves and many of its members are disillusioned.

Unbeknownst to most voters, in California, every two years Democrats elect members to represent the Assembly District they are registered in. These people are called AD Delegates. AD Delegates are elected by voters in their Assembly District and vote on behalf of the community they represent at California Democratic Party Regional Meetings, the California Democratic Party Convention, and those who are also elected to serve as an Executive Board member are responsible for voting and representing their community at the semi-annual E-Board meetings. AD Delegates are directly responsible for helping to shape the Party’s platform and be the voice of voters in their community at the Party level. 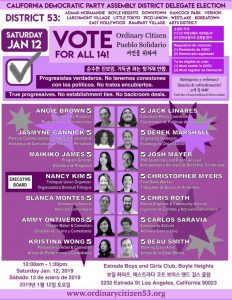 Unlike with other elections in the state, the California Democratic Party doesn’t talk much about or promote the election of AD Delegates to Democratic voters at-large. As a voter, you have to go searching for this information — something that most of us aren’t going to do. Many of these seats are “reserved” for Party favorites or people the Party can count on to vote the right way, say the right thing and if need be — look the other way.

AD Delegates to the Democratic State Central Committee (DSCC) are responsible for planning and attending informational meetings throughout the region and working with other DSCC delegates throughout California to represent their community.

AD Delegates are elected by voters and vote on behalf of the community they represent at CDP Regional Meetings, the California Democratic Party Convention, and those who are also elected to serve as an Executive Board member are responsible for voting and representing their community at the semi-annual E-Board meetings.

There are 44 people running for 14 delegate seats. Jasmyne Cannick is with a squad of equally progressive and diverse Democrats dubbed Ordinary Citizens. You are allowed to vote for 14 people, 7 men and 7 women. In addition to voting for Jasmyne, please vote for the following 13 individuals on Jasmyne’s squad. 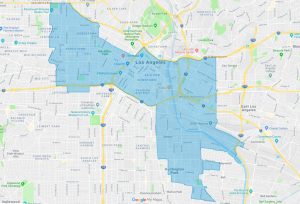 Jasmyne Cannick is known for her ability to speak truth to power as a journalist and television and radio commentator focusing on political, race and social issues. She was selected as one of ESSENCE Magazine’s 25 Women Shaping the World, one of the Most Influential African-Americans in Los Angeles Under 40 and one of Los Angeles’ Most Fascinating Angelenos by the L.A. Weekly.  A forward thinker with the ability to tackle hard to address issues from an unapologetically Black point of view, Jasmyne continues to successfully bring a logical mindset, including innovative theories to the art and practice of storytelling in the 21st century. She is widely known and heralded for her efforts to shape public opinion and encourage civic engagement for positive social change while advocating for underrepresented and marginalized communities. 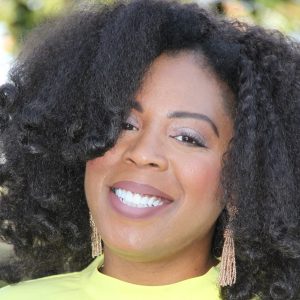 In 2018, Ms. Cannick led the effort as campaign director for Reform L.A. Jails, a criminal justice reform ballot measure that will appear on the 2020 ballot in Los Angeles County.

She continues to be the go-to strategic communications person for political campaigns, elected office holders, small to large-sized corporate, non-profit, and government organizations with high-stakes challenges.

Jasmyne Cannick has worked to perfect the art and science of promoting social issues for today’s audiences.  She has been tapped to work at all levels of government including successfully serving several terms as a press secretary in the California State Assembly before going to Washington D.C. to work in the House of Representatives.

Ms. Cannick has been writing and speaking publicly since 2004 and has developed a strong national following.  She has won numerous awards for her op-eds and reporting and is a frequent cable television news on-air contributor. Her writings and commentary have been featured in newspapers from coast to coast including the award-winning Huff Post, L.A. Weekly, Los Angeles Sentinel, Los Angeles Times, Los Angeles Daily News, Advocate, and Ebony Magazine to name a few.

No stranger to radio, she is a former co-anchor and reporter for the “Evening News” on Los Angeles Pacifica radio station 90.7FM KPFK.  Prior to its recent cancellation, Ms. Cannick was a regular on TVOne’s NewsOne Now with Roland Martin and continues to appear on Martin’s new show “Roland Martin: Unfiltered.” Jasmyne has been a regular commentator on NPR including the now-defunct “News and Notes” shows.  She’s worked as a segment producer on KJLH-FM’s “Front Page” show and continues to be a regular contributor to Southern California’s premiere news and current affairs show focused on the African-American community. She is also a regular contributor to KABC 790 AM’s “Midday Live with Dr. Drew.”

She is the co-founder of My Hood Votes along with Compton rapper Eric “Eazy-E” Wright’s son Lil E, a voter registration initiative focused on Los Angeles County’s roughest neighborhoods.  Jasmyne is a proud co-founder of the National Black Justice Coalition, the nation’s largest and oldest Black lesbian, gay, bisexual and transgender civil rights organization. She is a past co-chair of the National Stonewall Democrats Black Caucus.

Featured in Emmy magazine as an up and coming producer, she’s produced several films and television projects among them the documentary 41st and Central: The Untold Story of the Los Angeles Black Panthers and Noah’s Arc, the first African-American LGBT television series (Logo TV).

Thanks to her good friend actor Isaiah Washington, the Pan African Film Festival, and African Ancestry, Jasmyne traced her African ancestry to the Bubi people in Bioko Island and the Tikar, Hausa, and Fulani peoples of Cameroon.

A SoCal native by way of Hermosa Beach and Compton, in her spare time Jasmyne enjoys hiking and tennis. She supports numerous causes and organizations that focus on an array of social issues including community policing, LGBT issues and homelessness.

She continues to be a popular speaker at colleges, universities, conferences, and events discussing the intersection of politics, race, LGBT issues and civil rights for the 21st century.

For more information about Jasmyne Cannick or to support her campaign, please visit voteforjasmyne.com