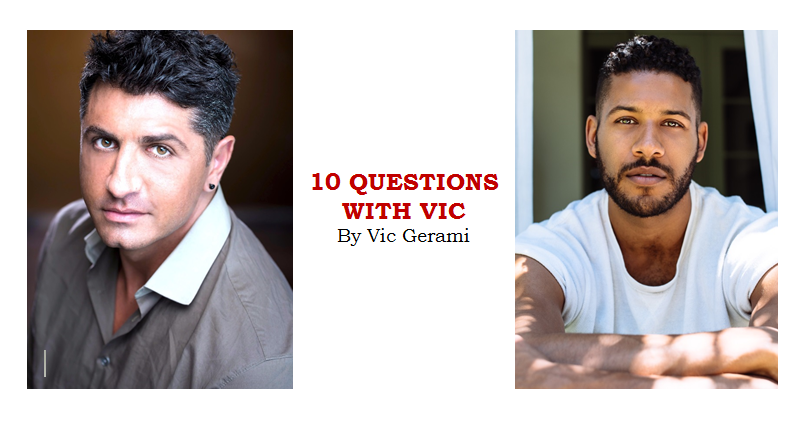 Jeffrey Bowyer-Chapman’s many talents require multiple hyphens to properly describe his career achievements. He started modeling at the age of sixteen and quickly landed ad campaigns for Levi’s and American Apparel. His first feature film, “Shock to the System,” premiered at the Outfest Film Festival. In 2015, he was cast as Jay in the popular Lifetime series UnREAL, which is in its third season. Since, he has also appeared opposite Robert De Niro and Zac Efron in the comedy “Dirty Grandpa” and in “Tao of Surfing” alongside Eric Balfour and Lou Diamond Phillips. All this, and Jeffrey is about to launch a podcast.

You have an impressive body of work at a young age. How do you reflect on your career so far?

I look at my career as a series of chapters that are coming together to compose the story of my life. I began modeling in my teen years, working as an actor in television & film in my early twenties, and now am at a place in my career where I’m able to use my platform and personality to help usher in a new generation of queer artists of color to shine bright and live authentically and create positive change and representation in the entertainment industry.

You are a proud gay man. Has being open about your sexuality affected your career?

When I began acting there were far fewer characters being written for gay men. The roles that were being written weren’t necessarily the stories I was interested in telling so I had to surrender to the fact that if this was the life career path I was going to follow I would have to be okay with working less than my straight counterparts, and instead take it upon myself to create my own content and bring my own seat to the table if there wasn’t one being offered to me. This is the path that felt right for me and I am happy to walk it.

You are originally from Canada and live between New York and Los Angeles. How is LA different from other major cities?

Los Angeles is very much a Company Town and it revolves almost entirely around the entertainment industry. It is a city of self-care and acts as a perfect setting to fill you back up with sustainable fuel to keep yourself going for the next audition, the next job, the next trip. That is, if you’re looking in the right places for that fuel. The weather is amazing, access to nature, a vibrant spiritual community and focus on organic food and overall health is a beautiful combination that allows me to stay balanced and lifted.

When I’m filming, I will wake up an hour before my pickup time, make coffee, shower, get dressed and meditate before heading to set. I’ll generally spend between 6-12 hours a day on set, then come back to my hotel, sit out on the balcony taking in the night sky, listen to a podcast or audio book, go to sleep and do it all over again the next day. I’m unapologetically in love with getting as much sleep as possible. Ideally 9 hours (or more) a night. I’m simply not myself or the best version of myself when I’m not fully, properly rested.

When I have a night off my favorite place to be is at home in Los Angeles or New York with my partner Andrew. He’s an amazing cook, so chilling in, having dinner, listening to records, relaxing in our backyard and cuddling up together is my ideal evening.

Recently I’ve been going through a list that NPR did of the top female albums of all time. My favorite discovery is an African vocalist named Oumou Sangaré. Nina Simone, Heart, Erykah Badu and Lauryn Hill have also been in heavy rotation as of late. My go-to male vocalists are Frank Ocean and Chance The Rapper.

If your schedule wasn’t full already, you are launching a podcast that will highlight human connectivity and LGTBQ stories. Can you talk about that?

“JBC Presents: Conversations With Others” is a space I created to hold honest, authentic conversations with influential, inspirational people who fall into the category of “Other”. I’m blessed to have a guest list of amazing friends come on this first season to share the story of their lives, and how existing outside of the status-quo shaped them into the magnificent people they’ve become. Representation in the media is a through-line of each episode, and those who are courageous enough to live their Otherness boldly and publicly are worthy of celebration. I get to share their stories.

My mother Karie Lyn Bowyer. She adopted me when I was an infant and was given less than 24 hours notice from the time she received a phone call from the social workers asking if she would take this child, to picking me up the very next morning. This is a woman who wanted children so badly she turned her entire life upside down in less than a day in order to protect and love me. Hers is the deepest, most unconditional love I have ever know. I aspire to love others like that.

Which actors and/or directors would you like to work with that you haven’t done so already?

At this point in my life and career I’m most interested in working with interesting storytellers. Sofia Coppola, Greta Gerwig and Ava DuVernay are my top three writer/director crushes.

What other project(s) do you have coming up?

Along with Season 3 Of “UnREAL” and the first season of my podcast launching February 26th, I’m also returning as a guest judge on my favorite television show “RuPaul’s Drag Race: All Stars 3”.