The Stage and the Altar: The Transformation of the Hero and the Audience

As you go way back in history, the stage and the altar were the same thing. The altar would be used as a stage, with religious dramas enacted upon it. Generally, these dramas were about the transformation of the hero and were for the benefit of those gathered there. They were used as a way to show those watching how to transform themselves, so from its earliest days drama has served a shamanistic function. People need help and often seek guidance in getting through life’s transitions: from childhood into adulthood, entering into a marriage or dissolving one, having children, dealing with success or failure, growing old and facing death, among many others. Think about the great movies that have given you a direction in life or energized you or helped you understand something key about yourself or the world. It may sound strange to think of movies having a religious function but it’s all about transforming the audience.

As Gandhi said at the end of the award-winning film about his life, “I can show you a way out of hell.” Martin Luther King said that a powerful emotional experience can be the first step on the road to commitment. Comedy is about transforming an audience as well, and clowns have their ancestry as priests. Laughter is very transformative, and many comedians take their job quite seriously. They know it’s crucial to laugh as a way to deal with life. Groucho Marx once inscribed a book, “They’ll never know how necessary our insanity is to their sanity.”

I was with Quentin Tarantino when he referred to the movie theater we were in as a church. The director Richard Linklater talks about having spiritual experiences in a movie theater as he grew up on a steady diet of classic cinema. And actress Carol Channing, who got her first look backstage as a kid said, “It came over me that I was looking at the stage and backstage of a cathedral, a temple, a mosque, a mother church. I know I’m using adult words to describe a child’s feelings, but I don’t know how else to tell you this simple reaction of a child to a holy place.” 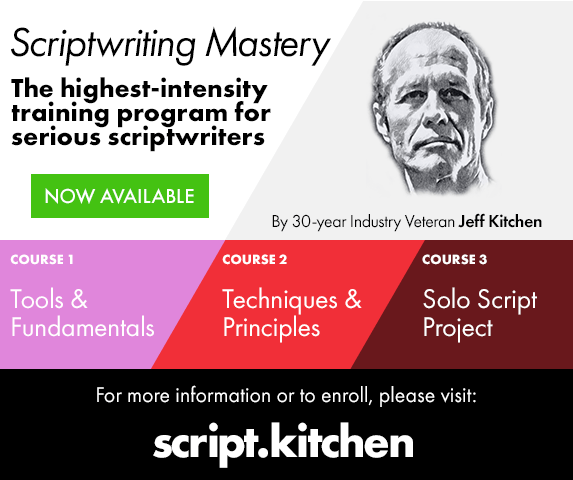 It’s interesting to think about the movies or TV shows that stay with you, to look back at scenes you’ll never forget, and to remember the first time you saw one of your favorites. Think about the movies that changed your life or awakened something powerful in you. Think about what transports you. What puts you over the moon? What puts you in a wildly altered state? To be really transported is an astounding experience. It is to be swept into a different dimension, to be taken to an exalted place, to feel a wildly energetic freedom.

It’s interesting to look at the absolute peak experiences in your own life—the ones you can count on one hand that stand out far above all others—the ones that transfigured you, so that you were a completely different person forever after. Examine the confluence of powerful emotions around it, the intensity, the exhilaration, or the pain. Why will you never forget it? Bring this level of intensity to your writing and it will help you to create a great script. Not that you’re replicating that specific event, but that you’re bringing the same energy to your script. The audience wants your movie to be one of the absolute peak experiences of their lives. As a storyteller and dramatist, you’re working with the elements of magic, transformation, rekindling dreams, and changing people’s lives or perceptions or energy. Throughout history, the storyteller has traditionally been a bringer of fire, of life, energy, healing, freedom, fun, action, insight, beauty, intensity, focus, and clarity. You have a wonderful job, bringing powerful transformative energy and a full spectrum of emotions into people’s lives, with the possibility of forever changing how they think and operate in the world.

I have several one-hour free classes on my script.kitchen YouTube channel. For more information and/or to register for the program, please visit http://script.kitchen