‘5B’ AIDS DOCUMENTARY DEBUTS AT ‘CANNES’ TO CRITICAL ACCLAIM

5B, Oscar-nominated filmmaker, Dan Krauss’ latest film about the early years of HIV and AIDS, debuts as this year’s Cannes Film Festival to critical acclaim.

Directed by Krauss (“Extremis”), the film is about a small group of nurses and caregivers in San Francisco General Hospital’s ward 5B, who came together to provide care and compassion to patients affected by HIV and AIDS in the early ‘80s.

5B is the inspirational story of everyday heroes, nurses and caregivers, who took extraordinary action to comfort, protect and care for the patients of the first AIDS ward unit in the United States. 5B is stirringly told through first-person testimony of these nurses and caregivers who built Ward 5B in 1983 at San Francisco General Hospital, their patients, loved ones, and staff who volunteered to create care practices based in humanity and holistic well-being during a time of great uncertainty. The result is an uplifting yet candid and bittersweet monument to a pivotal moment in American history and a celebration of quiet heroes, nurses and caregivers worthy of renewed recognition.

“I was a 10-year-old boy living in a suburb of San Francisco when the events in this film took place. Like many, I had no inkling of the courageous battles being fought in the name of compassion and care just a short distance away in the halls of San Francisco General Hospital,” Said Krauss. He continued, “The opportunity to share this little-known episode of history now, thirty-five years later, is an extraordinary honor.”

HIV positive and those with full-blown AIDS were stigmatized at a time when even doctors and scientist didn’t know much about the virus. Not knowing how the disease was transmitted, fearful hospital workers quarantined patients and wore HazMat protective clothing to examine patients and perform surgeries.

As a result, nurse Cliff Morrison led the initiative in 1983 to open a special unit dedicated to treating the AIDS patients. The nurses converted the residents’ sleeping quarters into the ward. Nurses volunteered for duty and insisted on the importance of touch, without gloves.

With no medical precedent, no idea how the disease was transmitted, and no hope for a cure in sight, these pioneering nurses made the rules up as they went along…from throwing parties for patients, to allowing pets to visit, to recognizing same sex sig others…It had never been done. Their methods were considered so unorthodox and effective, that 5B not only became the first World’s first AIDS Ward, but it created the “compassionate care” model which was studied and formally adopted as the international standard of care. 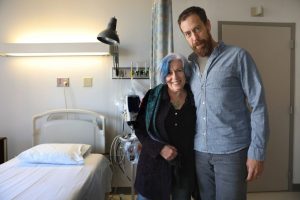 Their contributions changed LGBTQ discourse and treatment. Though none of 5B’s early patients survived, for a small window, the nurses gave those diagnosed with AIDS a new reason to live and the chance to die with dignity.

After its premiere at LA pride in June, the film hits select theaters nationwide on June 14th. In addition, 30% of net proceeds earned from the film will be donated to (RED)’s Global Fund Red.org.

Krauss was nominated for an Academy Award in 2017 for his documentary short “Extremis,” about the doctors, families and patients forced to make end-of-life decisions. He also garnered a nomination in 2006 for his documentary “The Death of Kevin Carter: Casualty of the Bang Bang Club,” about the suicide of South African photojournalist Kevin Carter, who was known for his harrowing photo of a starving girl being stalked by a vulture.

5B’s premiere at LA Pride is apropos as this is the 50th anniversary of the Stonewall Riots. The film, presented by RYOT, a Verizon Media company, is slated for a U.S. Celebrity Premiere at LA Pride as part of the Verizon Media’s groundbreaking sponsorship of the annual event as well as a theatrical debut in June, 2019, with international releases and VOD distribution this fall. 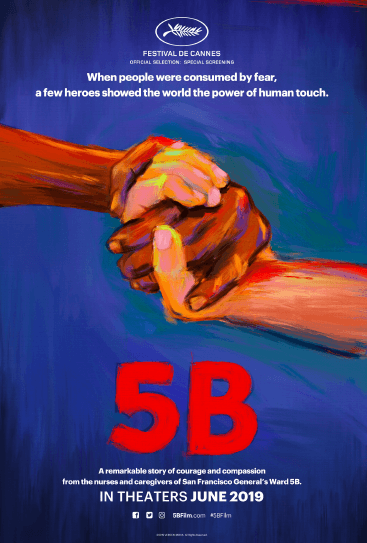