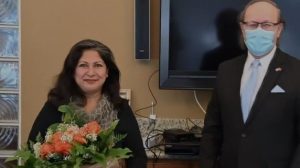 Claudia Shambaugh: ‘I will interview our incumbent Mayor Farrah Khan.’

Shambaugh, the host of her radio show on KUCI 88.9 FM based at UC Irvine, was quick to declare that she intends to interview Irvine Mayor Farrah Kahn during her interview with astrophysicist Dr. Kev Abazajian, Professor of Physics & Astronomy, University of California, Irvine. On April 19, days before the 107th anniversary of the Armenian Genocide, their discussion was Irvine Mayor Farrah Khan’s blatant Armenophobic and hateful behavior for which she has not been held accountable.

Before I address the egregiousness of Shambaugh’s declaration, let me give you some background and context.

The revelation happened when a video surfaced of Mayor Khan meeting with Los Angeles Turkish Consulate Can Oguz, well-known Armenian Genocide denier Ergun Kirlikovali, and others in November 2020, laughing and joking about making ‘Armenians disappear.’ In the clip, one of the attendees offered Khan a box of Turkish delights. At that point, Kirlikovali joked that if any Armenian people were to see the candy, she could eat them, and they would vanish, which Khan followed up by saying she’d be sure to eat the candy in front of Armenian people.

This was about the genocidal assault and ethnic cleansing unleashed by Azerbaijan, Turkiye, ISIS, Syrian, Libyan, and Pakistani jihadist mercenaries on Artsakh (Nagorno-Karabakh) that massacred 5,000+ indigenous Armenians in their ancestral lands of millennia.

Since the release of the video, Khan showed that her response to the Armenian-American community is to admit to nothing and to do even less. Over 42 minutes of comments were made in support of the Armenian community at the April 12 City Council meeting. Speakers condemned Khan’s years-long relationship with Armenian-Genocide deniers and the Mayor’s hate speech. The Democrats of Greater Irvine did not support Mayor Khan for endorsement and have censured her actions. 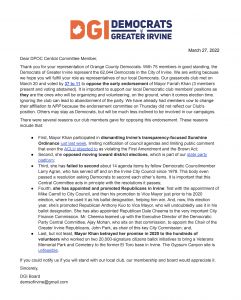 Khan’s first response was to claim that the video was ‘doctored,’ then accuse the Armenian community of political takedown. After multiple sources authenticated the video, she finally released a short video with a disingenuous non-apology to the Armenian community. She didn’t take responsibility for anything specific, nor did she address her relationship with Kirlikovali. It was classic PR damage control to appease the public and the Democratic establishment as she is up for reelection.

So, what’s wrong with Shambaugh’s desire to interview Khan?

Let me put it this way. As a gay Armenian-American journalist and activist, I have witnessed and fought against similar situations involving anti-black racism, homophobia, transphobia, antisemitism, Hispanophobia, and anti-Asian racism, among others. But in those instances where there was overwhelming evidence against the culprit, no one has tried to get the ‘other side.’ This gifts the bigoted politician a platform to further insult and injure the targeted community with justifications, mendacious non’ apologies,’ and carefully crafted public relations soundbites. Khan has had several opportunities in a month to make genuine amends to the Armenian community, but she has not.

It’s hard to believe that the Democratic Party of Orange County endorsed Mayor Khan AFTER the video’s revelation and her non-apology. The party must condemn her actions and rescind its endorsement.

A Body Is a Bridge, a Body Is Water: Armenian/Indian Art Show + Pop Up in LA SCREWDRIVER Slated To Premiere On The Closing Night Of Dances With Films