I knew something changed when all the cliches started ringing true. Life in active addiction saw me stumble through the world a bitter, cynical heathen rolling his eyes over a glass of scotch or through the smoke from an overpriced cigarette. I thought I was impervious to cutesy phrases feigning wisdom. But when I was in rehab and began to truly check my pretenses to give sober life a shot, I started hearing things.

First of all, let me make it clear that detox and rehab were medically necessary for me to get sober because physical dependence had eclipsed my emotional reliance on alcohol and drugs. So before I felt emotionally uneasy and reached for a bottle to soothe the pain, my body needed alcohol or else I’d withdraw. I know that without the attention of nurses and professionals, quitting drinking would have been dangerous for me because of the risk of seizure.

But. The crux of the rehabilitative process for me is human connection. The camaraderie amongst other recovering addicts, the stories and promises offered by the employees who had personally experienced addiction, and the kindly ears and advice provided by the professionals — it got me out of bed in the morning with minimal fear, and I began to face myself. To reflect on this, I took photos of myself throughout treatment.

I also learned quickly just how much the program loves to turn a phrase. It’s full of them. And it’s not just the bible- and big book-thumpers perpetrating; even those not married to the recovery lifestyle spout platitudes like wizened, hooded elders. (Personally, I refuse to repeat them so do not expect to see any examples printed here. Just recall the feel-good memes and bumper stickers that most recently intruded on your personal head-space. They still anger me and curl that little muscle behind my bellybutton. *Shudder.*)

When addicts enter treatment, we don’t necessarily need to learn that our lives had become unmanageable or that we had largely given up on finding inner peace and were likely very depressed. We also don’t necessarily need to spend all of our time in recovery discussing and revisiting our misery and shame. On some level we know all of this and that’s why we seek treatment.

In fact, some of the most sobering moments of the whole experience were when we shared stories about the ridiculous things we did in active addiction and invited others to laugh with us. And I could always tell another patient was doing well if they caught themselves saying one of those cliches and then laugh. In that environment, when laughing doesn’t happen because it’s too hard to cry or because it’s the most cutting way to judge ourselves — I think that means we’ve learned and accepted something new about ourselves. Maybe that’s why I wasn’t comfortable photographing myself smiling until I got out and spent time with a new friend. I just needed to laugh enough first.

In treatment, I wasn’t mired by judgment or pity from others. I was not surrounded by people who cared but couldn’t relate. Or worse, surrounded by people who claimed to understand but really had no fucking clue. There, I had room to articulate complex feelings and worries, and there was no pressure to connect. So when connections happened it was easy and natural, and it was ok when one person’s recovery looked different from another’s. There was no need or expectation to package personal experience so it was digestible for someone else. 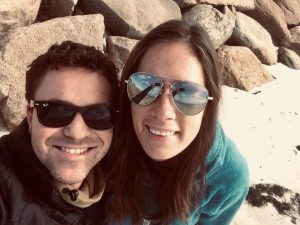 On the other end of the spectrum was a patient who insisted that he didn’t need to be in rehab, and was only there because his parents were making him do it. According to him, they misunderstood that his doctors wouldn’t prescribe him the meds he wanted, so he just micro dosed himself with cocaine. To say he annoyed the other patients is generous. To say he annoyed the fuck out of other patients is diplomatic. He even mustered the nerve to say he decided to stay in rehab because he was thinking of it as a vacation or a country club. Never-mind that people are dying from this stuff… And yet, I related to his skepticism and denial and bargaining. He reminded me of when nothing seemed to matter or mean anything. And when nothing matters then

I guess I fell somewhere in-between resistance and immersion. I gave every resource a shot — except the treadmill. I still consider the 10 lbs. of vodka-weight flushed a major victory. From 1-on-1 counseling, to art therapy, to group meetings, to speaking with the spiritual advisor, I gained something of personal value from each facet of the program. However, the most surprising nuggets came from the cliché sayings, no matter how much they niggle me. It’s a serene and fleeting phenomenon, and it lightens the air around me each time I hear — not the words or the alliteration or the rhymes, but the truths behind them. They’re small and big at the same time, and gentle enough to let me exhale completely. The scary part? Accepting that other people know things, too. Maybe even better than me.

Now, I’m a bit frustrated because they’ve been in front of me for nearly three decades and I’m only now beginning to access them. At 30 years old — sure I’m sober and a lot more honest with myself and with the world — I’m also suspicious of my impulse to think I know better than what seem like reductive truisms. Because now, or more likely for always, things aren’t necessarily more complicated than what bromides and placations seem to simplify. Maybe they persist because they’re made of more than desperation and dreams. Or maybe they’re made of less and that’s why they’re worth a listen.

Rehab didn’t save my life as I live it because what ultimately led me there was the realization that I had forgotten to live as my best self — that the addict within was getting damn near close to displacing myself with vodka, to climbing into the bottle and living there instead of here. In treatment, I began the process of laying to rest some parts of me that no longer looked out for my own best interest. It provided a safe and supportive environment for pulling the plug on self-destruction, and then for mourning the loss of an unhealthy coping strategy. But I’m the one who pulled that plug.

More than anything, rehab was a funeral for a part of me that needs to die so the rest of me can move on and live. And whether I like it or not, clichés and placations are simple enough to penetrate my grief and soothe the panic.

Don’t misunderstand — I’m not cured, I’m quite bereft, and I’m still bitter, cynical, and godless. I’m just listening for a moment longer, giving the words a chance to express a heartbeat before I decide to roll my eyes.