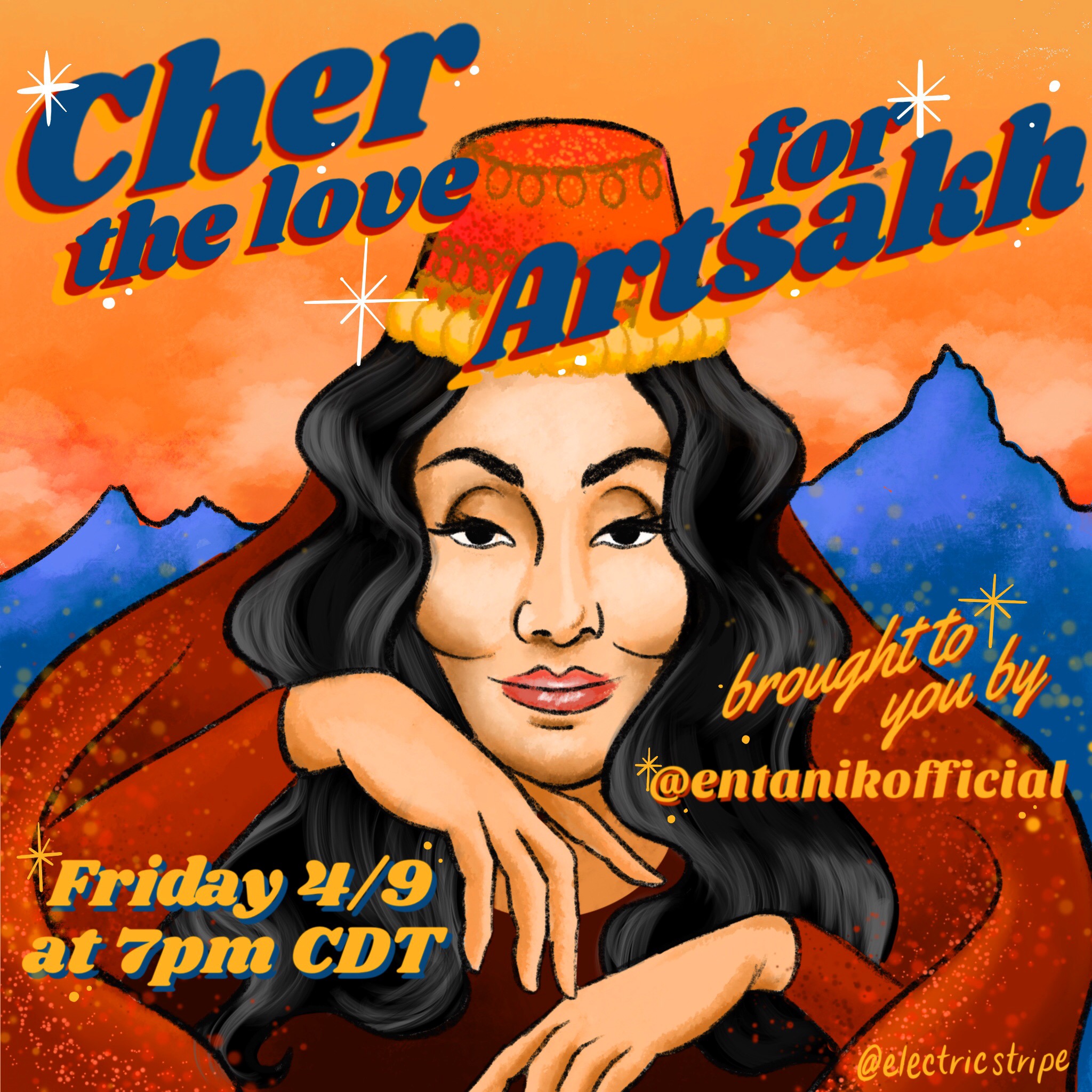 Entanik, a queer Armenian organization based in Chicago and operating online, announces its first event, Cher the Love for Artsakh. The event is a virtual drag show featuring twelve Armenian and allied artists from around the world in Cher-themed performances. The show focuses on Cher as one of the most well-known and iconic Armenians, using her music to fight violence and destruction with creativity and positivity.

“Over the last few years, we’ve been trying to draw together members of the Armenian queer community in Chicago,” said Kristin Anahit Cass, co-founder of Entanik, “We felt that there was a need for a platform that would really reach out, amplify queer Armenian voices, promote the work of queer Armenian people.”

“I had this idea about an art action to support Artsakh, and I took my idea to Scott Mazmanian who’s a big supporter of the Chicago drag scene,” said Anahit Cass. “And he really made it come to life.”

The event will raise funds for ‘Eyes on Artsakh’, an organization run by two queer Armenian diasporas that focuses on providing aid to people affected by Azerbaijan’s attacks on the tiny Armenian republic of Artsakh in the Artsakh War of 2020. Eyes on Artsakh was started during this war to provide immediate aid. But after a ceasefire agreement resulted in the ethnic cleansing of thousands in November, they have transitioned to providing long-term aid to wounded soldiers and their families.

“As members of the LGBTQ+ community, we know what it is like to face discrimination and oppression,” said Scott Mazmanian, co-founder of Entanik. “We want to use our platform to connect with everyone who supports our communities and help those most in need right now.”

The event will be held on Friday, April 9 at 7 p.m. CDT. It will be streamed twice, at 7:00 p.m. and 8:00 p.m. on Twitch, and tickets are available at https://cherthelove.eventbrite.com. Entanik is sharing information about the event and performers via Instagram and Twitter, @EntanikOfficial. More information is also available about Eyes on Artsakh, including their initiatives and transparency, on Instagram @EyesOnArtsakh.

Entanik, the Armenian word for “family,” is a chosen family of queer Armenians and allies dedicated to coming together in inclusive unity. They are dedicated to uplifting and showcasing people in queer, Armenian, and allied communities through fundraising, events, social media, and other outreach programs. The organization was established in January of 2021 and is using social media and virtual platforms to build a global community.

What is Emotionally Intelligent Leadership and Why Does it Matter? Open Letter: Should the UK Assist Azerbaijan in Cultural Genocide and Propaganda Campaign?