Our goal is to keep your teeth healthy and your smile bright. Dr Thomas believes that everyone deserves a beautiful smile. 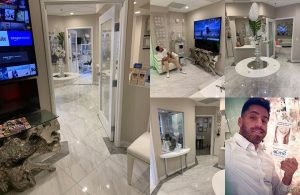