If this statement is true, then Peter Stano, lead spokesperson for the external affairs of the European Union, is partly responsible for Azerbaijan’s ongoing campaign of hate, violence, and disinformation against Armenians.

For months, Mr. Stano’s statements have spewed toxic bothsideism and false balance against the Armenians. He has tried to make both sides equally responsible for the violence, even though one is clearly, at fault. His bias presents this issue as being more balanced between opposing viewpoints than the evidence supports.

In March, Human Rights Watch (HRW) published a report about the Armenian POWs Abused in custody, following their December report that Armenian prisoners of war were severely mistreated.

So, on January 29, Mr. Stano sent the following tweet with inaccurate yet public information, creating a false balance, 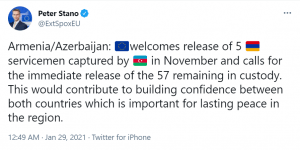 “EU welcomes release of Armenian servicemen captured by Azerbaijan in November and calls for the immediate release of the 57 remaining in custody. This would contribute to building confidence between both countries which is important for lasting peace in the region.”

There was at least 200 known Armenian POW in Azerbaijani custody in December, according to multiple human rights defenders who appealed to the European Court of Human Rights for their release and reported by eurasianet.

Secondly, Mr. Stano’s refusal to point out the elephant in the room is dangerous. It enables and encourages Azerbaijan’s president Aliyev to continue his terror with impunity. Instead, Mr. Stano writes nonsensical rhetoric about confidence-building. Really? Would he dance around the subject if Slovaks were held hostage by Azerbaijan?

In May, Azerbaijani troops crossed the southern border of Armenia, trying to stake claim to the territory. The troops had advanced more than three kilometers (two miles) on south Armenia and tried to “lay siege” to Lake Sev Lich, as reported by France 24.

First, why use the word development to skirt the real issue. The fact is this: Azerbaijan invaded Armenia proper with hundreds of its troops-period. So why is he not calling a spade a spade? His tweet isn’t just inaccurate and manipulative but also very reckless. Every time the international community turns a blind eye to Azerbaijan’s war crimes and crimes against humanity, it enlivens Aliyev’s brutal regime. Why would Aliyev stop his aggression if the European Union is whitewashing his crimes?

On June 5, 2021, Azerbaijan released 15 detained Armenians in exchange for the map of 97,000 anti-tank and anti-personnel mines in the Agdam district, as reported by Radio Free Europe. However, instead of releasing all 200+ hostages, including women, Azerbaijan is engaging in trade. This led Congressman Frank Pallone (NJ) to tweet, “15 Armenian prisoners released from Azeri custody is welcomed but also demonstrative of Aliyev’s calculated use of them as leverage. We need the US and others to continue condemning these illegal acts and ensure the return of every single one of these individuals.”

“EU welcomes release of 15 detainees and handing over landmines map. Important confidence building measures, hopefully leading to release of all detainees, and sharing of all maps. Further cooperation needed.”

Here we go again. Note that Mr. Stano uses the word ‘detainee’ rather than a more accurate description. The truth is that most of the Armenians held in Azerbaijan used to be POW but are now hostages as the ‘war’ is over, and they are being held illegally according to international law. Mr. Stano uses detainees to describe them, much like one would represent those detained at the airport, thus lightening Azerbaijan’s action.

Also, why not call on Azerbaijan to release ALL the hostages?

Since the trilateral Ceasefire Statement between Russia, Azerbaijan, and Armenia ending the war over the control of Nagorno-Karabakh, over 200 POWs are still unlawfully held by Azerbaijan. Azerbaijan’s actions violate Article 8 of the above statement and the III Geneva Convention on Prisoners of war. The Convention establishes that prisoners of war must be released and repatriated without delay after the cessation of active hostilities (Article 118). Unfortunately, existing POWs have only partially been returned (a total of 64). Still, new hostages – civilians and soldiers – have been taken by the Azeri forces, who gained control over 75 percent of Nagorno-Karabakh after the 44-day-war in autumn 2020. Evidence of inhuman abuse and torture of Armenian POWs has been reported across international media, including ISIS-style beheadings by the Azeri militants of elderly civilians and soldiers.

Except for France, the European Union has turned a blind eye to Azerbaijan’s, Turkey’s campaign of terror for the most part. Europe has a lot more to gain from its strategic partnership with Azerbaijan and Turkey rather than Armenia. Multiple European firms have invested billions in the pipelines that take Caspian oil and gas to Europe. So, how does an autocratic regime like Aliyev’s Azerbaijan divert attention abroad from its human-rights record and discourage the opposition at home? In the case of Azerbaijan, through lavish extravaganzas and high-end lobbying called ‘caviar diplomacy.’

In January of this year, the former Chairman of the Parliamentary Committee on Legal Affairs and Human Rights of the Council of Europe, Luca Volonte, was sentenced to four years in jail on Monday, January 11, for taking a bribe from two Azerbaijan politicians to get the Council of Europe to pull a critical report on political prisoners in Azerbaijan. He was found guilty of taking about two million euros from the Azeri politicians, who were given the same four-year sentence. 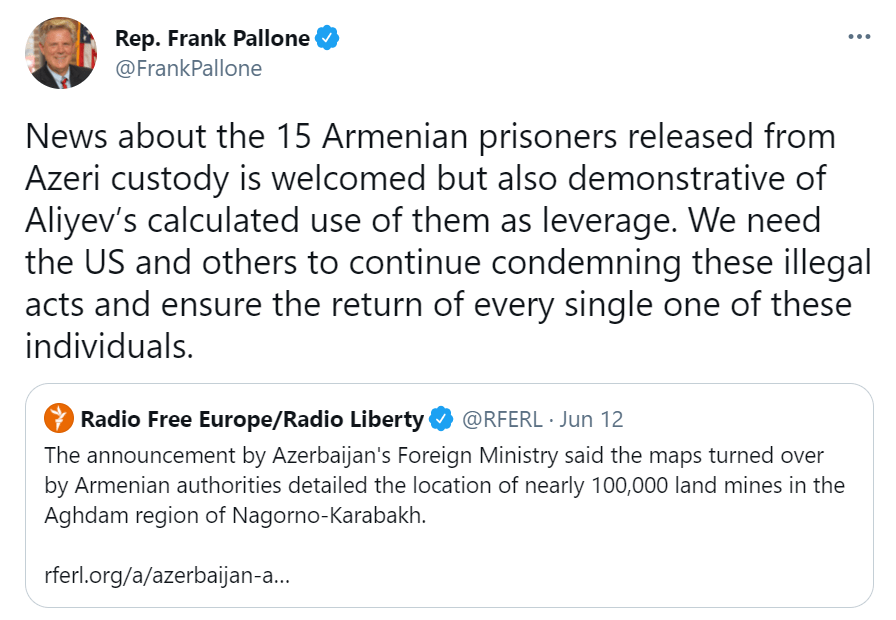 Some of this money went to politicians and journalists as part of an international lobbying operation to deflect criticism of Azerbaijan’s president, Ilham Aliyev, and promote a positive image of his oil-rich country. There is no suggestion that all the recipients were aware of the original source of the money. It arrived via a disguised route.

The leaked bank records show multiple payments to several former members of the Council of Europe’s parliamentary assembly, Pace. One is Eduard Lintner, a German ex-MP and member of the Christian Social Union, the Bavarian sister party to Angela Merkel’s ruling Christian Democrats. Another is the former Italian chair of the center-right group in Pace, Luca Volontè. It was reported in The Guardian.

Not every topic warrants a “both sides” approach. Some viewpoints are not backed by empirical evidence or are based on false information. And officials must be careful not to present them as legit debates. If they do, they are creating a false equivalence or logical fallacy. These types of statements and tweets are hazardous as dictators like Aliyev rely on them. A reckless Statement from the EU by Mr. Stano costs lives and destroys thousands of people. Aliyev gages the international community before making his next violent move, and Mr. Stano makes it very easy for him.