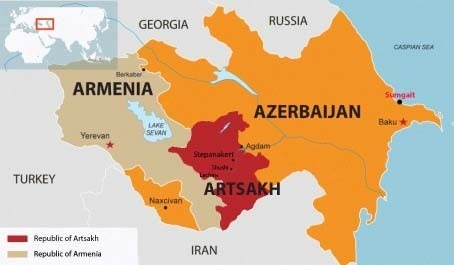 Artsakh, also known as Nagorno Karabakh, is an integral part of historic Armenia. During the Urartian era (9-6th cc. B.C.) Artsakh was known as Urtekhe-Urtekhini. As a part of Armenia Artsakh is mentioned in the works of Strabo, Pliny the Elder, Claudius Ptolemy, Plutarch, Dio Cassius, and other ancient authors. The evident testimony of it is the remained rich historic-cultural heritage.

Artsakh, one of the 15 provinces of historic Armenia, is in the eastern Armenian Plateau. Geographically, the Artsakh Republic defines itself within administrative borders of the former Soviet Union’s Region of Mountainous Karabakh, and the adjacent Shahumyan district.

WHEN DID THE CONFLICT BEGIN?

In 1921, Soviet dictator Joseph Stalin, to consolidate his power, forcibly placed Artsakh under Soviet Azerbaijani rule. An arbitrary decision without precedent placed a millennia-old autonomous Christian territory into a largely hostile Muslim regional government entity. During the Soviet regime, Artsakh repeatedly appealed to the Central Government in Moscow to restore justice and reunite the region with Armenia. After years of tireless struggle, Moscow granted autonomous status to the region. The Nagorno Karabakh Autonomous Oblast (Region) was created on a part of historical Artsakh. However, this new formation was deliberately separated from Armenia by a slim corridor.

Since  its  creation  in  1918,  Azerbaijan  has  been  implementing  an open campaign of national, ethnic, religious, cultural, and economic discrimination, aiming to eliminate the region’s Armenian heritage. Just as it succeeded in eliminating the Armenian population of Nakhichevan, which was 50 percent Armenian in 1920 down to zero by 1991, Azerbaijan aimed to achieve ethnic cleansing in Artsakh. Its policies had already shaved down the Armenian population from 95 percent to 75 percent when it resorted to more violent methods of eliminating the Armenians.

The formation of three ethnic republics of Transcaucasia, Armenia, Azerbaijan, and Georgia, began in 1917, because of the collapse of the Russian Empire. The population of Nagorno-Karabakh, 95 percent of which were Armenians, convened its first congress, which proclaimed Nagorno-Karabakh an independent political unit, elected the National Council and the Government. In 1918-1920 Nagorno-Karabakh had all the trappings of statehood, including the army and the legitimate authority.

In response to the peace initiatives of the people of Nagorno-Karabakh, Azerbaijani Democratic Republic launched a military action. From May 1918 to April 1920, Azerbaijan, and military units of Turkey, which supported Azerbaijan, used violence, and carried out massacres against the Armenian population (in March 1920 about 40,000 Armenians were killed and deported only in Shushi). But it was not possible to make the people of Nagorno-Karabakh obey Azerbaijan’s power in this way.

In August 1919, to prevent military conflict, Karabakh and Azerbaijan signed a preliminary agreement by which they agreed to discuss the problem of the status of the region at the Paris Peace Conference.

The League of Nations rejected the request for Azerbaijan’s membership, citing the fact that it is difficult to define clear boundaries and territories under the sovereignty of this state. Among other contentious issues, there was the issue of the status of Nagorno-Karabakh. Because of the Sovietization of the region, the issue fell out of the agenda of international organizations.

Confronted by the genocidal forces of the Ottoman Empire, Armenia was fighting in 1918 for its very existence. Artsakh was mostly left to defend itself against Azerbaijani forces allied with the Ottoman Turks. When the Russian Communists took over the South Caucasus in 1920, instead of resolving the ethnic tensions that had inflamed the region, they perpetuated the divisions as a method of controlling the nominal republics of the Soviet Union.

Recognizing that 95 percent of the population was Armenian, the Soviet regime granted Nagorno Karabakh autonomy, but within Soviet Azerbaijan. During the last liberalizing phase of the Soviet era, per existing law, the population of Nagorno Karabakh declared its self-governing republic in 1991. Azerbaijan, with its Muslim majority population, responded by declaring war against the Christian Armenians. After a bloody and destructive conflict resulting in 30,000 deaths, a cease-fire agreement was signed in 1994. Year after year, however, serious, and deadly violations by Azerbaijan increased in frequency until the April 2016 escalation into a major confrontation involving large-scale attacks by Azeri forces along the entire border of Azerbaijan with Artsakh and Armenia.

WHEN DID THE CURRENT CONFLICT BEGIN?

The current phase of the Nagorno-Karabakh conflict began in 1988 when in response to the self-determination claims of the NK population the Azeri authorities organized massacres and ethnic cleansing of the Armenian population on the entire territory of Azerbaijan, particularly in Sumgait, Baku, and Kirovabad.

On December 10, 1991 NK population declared the establishment of the Nagorno Karabakh Republic (NKR) by plebiscite, which fully complies with both international law norms and the letter and spirit of the USSR laws of that time. Thus, on the territory of the former Azerbaijani SSR, two equal state formations were created – the Nagorno-Karabakh Republic and the Republic of Azerbaijan.

In Nagorno-Karabakh and surrounding areas populated by Armenians, the policy pursued by Azerbaijani authorities turned into overt aggression and large-scale military actions against the Republic of Nagorno-Karabakh, which resulted in tens of thousands deaths and caused considerable material damage.

Because of the war, Azerbaijan occupied the whole region of Shahumyan and the eastern parts of Martakert and Martuni regions of Nagorno-Karabakh. Neighboring districts went under the control of Nagorno-Karabakh armed forces, which played the role of a security buffer to block the further firing from the Azeri side towards Nagorno-Karabakh settlements.

In May 1994 Azerbaijan, Nagorno-Karabakh and Armenia signed a ceasefire, which, despite violations, is still effective.

Conflict settlement negotiations are held in the framework of the OSCE Minsk Group (Russia, USA, France). In the last decade, several options for the settlement proposed by the co-chairs were rejected by Azerbaijan. The last was “Paris Principles” in 1991 which were summed up in the Key West document.

Currently, negotiations are held based on the Madrid proposals represented by co-chairs in November 2007.

Despite the negotiations held within the framework of the OSCE Minsk Group which is the only internationally mandated format on conflict settlement, and the agreement to carry out negotiations within the Minsk process, Azerbaijan, distorting the nature and main reasons of the consequences of the conflict, takes attempts to involve other international organizations in the settlement and initiates parallel processes hindering the negotiation process and having campaign objectives especially in the UN GA and the Council of Europe, too.

On April 2, 2016, Azerbaijan, with the support of Turkish military personnel and equipment, initiated a military oﬀensive against Armenia and Artsakh. The oﬀensive started with the killing of a 12-year-old boy on his way to school and continued with the gruesome mutilation of an elderly Armenian couple. Increasingly and without international condemnation, Azerbaijan has flaunted the signed 1994 cease-fire agreement, targeting civilians in violation of international law. Azerbaijan admitted to launching the oﬀensive – which came hours after President Ilham Aliyev’s

meeting with Secretary of State John Kerry in Washington, D.C. The large-scale incursions along the Line of Contact resulted in the death of over 100 members of the Artsakh defense forces.

Azerbaijan’s aggressive bellicose campaign also puts under question Azerbaijan’s desire, statements, assumed obligations, and their seriousness aimed at compromise settlement. Azerbaijan continues sending money from oil revenues to increase the military budget and to the acquisition of many offensive armaments, grossly violating several agreements and obligations in the sphere of security and political-military sphere. Azerbaijan fails all the economic, political, military, and humanitarian initiatives aimed at strengthening trust between the parties. Particularly, Azerbaijan rejects the offer of the Armenian side on regional cooperation and the offer of the Minsk Group to pull out snipers from the contact line. Azerbaijan’s rampant human rights violations are not well known. The Human Rights Watch reported on this in 2019.

WHO IS THE PRESIDENT OF AZERBAIJAN?

Azerbaijan’s dictator and corrupt president Ilham Aliyev and his family’s corruption extends throughout the globe and is well documented by countless investigative journalists. While Azerbaijanis live in oppression, Aliyev’s family has drained the country to amass wealth in the billions. Will Fitzgibbon, Miranda Patrucić, and Marcos Garcia Rey’s article, ‘How Family that Runs Azerbaijan Built an Empire of Hidden Wealth,’ for the International Consortium of Investigative Journalists, is a thorough investigative piece outlining some of the most egregious lawlessness of the Aliyev family.

WHAT IS THE POSITION OF ARMENIA ON ARTSAKH?

Armenia attaches importance to the mediation of the OSCE Minsk Group in the Nagorno-Karabakh conflict settlement process, as a viable format for the settlement which has enough potential to find ways of settlement.

Azerbaijan’s attempts to get unilateral concessions by the threat of use of force are not only doomed to failure from the beginning but also continue to be the main obstacle for the settlement through compromise.

Artsakh has no future as a part of Azerbaijan and whatever is the solution, it must emanate from the will of the Karabakh people. That is the essence of the right of peoples to self-determination. Azerbaijan has neither legal nor political or moral grounds to claim over Nagorno-Karabakh.