AQUAMAN SINKS ON SUBSTANCE BUT SWIMS ON SPECTACLE 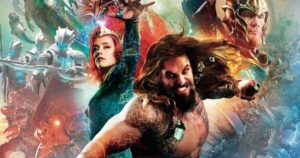 Since its inception, Warner Bros’ DC Extended Universe has faced an uphill battle concerning the critical reception of its films. While Man of Steel, Batman vs Superman: Dawn of Justice and Suicide Squad were financially successful, they were widely panned by critics and audiences alike. The franchise then experienced a glimmer of hope when they achieved universal success with the film, Wonder Woman. Unfortunately, that success was short-lived as DC’s subsequent film, Justice League, not only failed to capture audiences but performed so poorly at the box office that it lost the studio close to $60 million.

Needless to say, the DCEU’s latest film, AQUAMAN, was awaited with great trepidation.  As it currently stands, it is set to earn nearly a billion dollars globally. As far as the film’s quality, however, DC still has their work cut out for them. 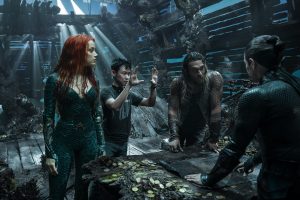 Directed by James Wan, the story focuses on Arthur Curry (Jason Momoa), whom the world has come to know as “Aquaman.” Born of a human father (Temuera Morrison) and the Queen of Atlantis (Nicole Kidman), Arthur is recruited by Mera (Amber Heard), a noble from a neighboring underwater kingdom, to stop Arthur’s half-brother, the power-hungry King Orm (Patrick Wilson). Orm plans to not only conquer the other underwater kingdoms but also to take siege of the surface world. With Mera’s help, Arthur goes on a quest to retrieve the powerful Trident of Atlan, thwart his brother’s plans and take his rightful place on the throne of Atlantis.

From a structural standpoint, the movie is saturated with problems. Besides atrociously forced and disingenuous dialogue, the biggest problem it faces overall is “congestion.” The tale of Arthur facing off against his half-brother has previously been told both in comics and even in DC’s Animated movie “Justice League: Throne of Atlantis.” However, where previous adaptations were successful in concentrating solely on this storyline, this movie attempts to combine too many plot threads into 2 hours and 23-minutes. There is even the unnecessary inclusion of an additional villain known as “Manta” (Yahya Abdul-Mateen II) shoehorned into the story. Considering that the narrative is already struggling to fit so much in, the character would have been much more suited for the inevitable sequel. The focus and tone are in such a constant state of flux, that it is difficult to get invested in any of the themes it tries to explore.

On a positive note, the majority of the visual effects in this movie are outstanding. What James Wan may lack in the ability to tell a compelling emotional story, he compensates with his talent at delivering a spectacle. The shots of Atlantis’ landscape are bright, detailed and impressive. Several scenes in the movie harken back to some of Wan’s horror roots. Despite a few jarring and over-the-top CGI battles, there is a rooftop chase scene featuring superb camera-work, utilizing a single camera shot that pans out slowly while the two heroes evade capture. 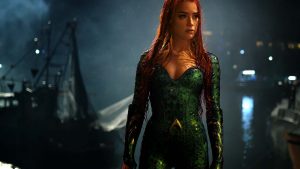 Regarding the performances, Jason Momoa does a competent job playing the rugged hero, Arthur Curry. He’s charming and affable on-screen, even if some of his more poignant moments lack depth. Amber Heard does her best with the role of Mera, however, she is given very little to work with character-wise. Her character exists solely to deliver exposition to Arthur and the audience. The same note can be given to the criminally underused Willam Defoe as Vulko, who plays Arthur’s secret mentor and Orm’s trusted advisor. The performance that truly stands out, however, is Patrick Wilson’s. His portrayal of the mad King Orm is grandiose and melodramatic, which is coincidentally pitch-perfect for both the genre and the piece.

In summation, this film will likely satisfy those looking for a standard-issue blockbuster filled with spectacular visuals but devoid of real substance. Financially speaking, this film will continue taking the DCEU in a promising direction. However, in terms of great storytelling and character development, DC still has miles to go. All things considered, the movie gets a C+ for delivering an action-packed adventure with lazy dialogue and a subpar structure.

Christopher Henry is a critic and writer for The Blunt Post. Originally from Boston, Christopher has worked as an actor, singer and comic in New York City for over 10 years.
BOOK REVIEW: ‘APPETITES’ BY ALEXANDER DICKOW MAKING THE CASE FOR GAY BLACK LIVES