Jasmyne Cannick runs in her first election on a platform to change the CA Democratic Party.  She aims to hold elected officials accountable for political donor Ed Buck’s alleged behavior blamed for the deaths of two gay Black men in recent years.

Yesterday, I participated in my first intra-political campaign volunteering for candidate Jasmyne Cannick in her race to become the newest Delegate in the California Democratic Party’s Assembly Delegate Election Meeting (ADEM) 53rd Assembly District. I discovered the challenges that a strong voice advocating for the Black LGBTQ community faces from the institutions of a political party. Cannick, a journalist, activist, and political commentator, has garnered national attention by her investigatory journalism exposing the alleged abuse by a rich, white democratic party donor, Ed Buck. Buck has donated to many of the very party insiders that Cannick is running to hold accountable. It became clear that making the case for gay Black lives would become a “Jasmyne vs Goliath” story where our protagonist boldly faces off against a political machine that has a poor track record of listening to Black women.

There are political institutional barriers that mute the harsh reality that gay Black lives have been undervalued, and their plight has been ignored by even the liberal populace of Los Angeles California. These “invisible” institutional barriers, both literal and figurative, became noticeably tangible as they worked against Cannick’s campaign. The evidence of these barriers would likely go ignored and untold if not for the dogged reporting and community engagement that candidates like Cannick and the “Ordinary Citizens” campaign she worked with brought to public scrutiny. For instance, the district has a clear disadvantage for Black voters in what “Ordinary Citizens” called democratic gerrymandering diluting the Black vote. The voting location was in the Boyle Heights neighborhood where Black populations have a long journey to travel.  If they were eligible to drive, a big “if”, the location offered very scarce parking for those voters; leaving them to walk to the polling location. Hate crimes have been on the rise, and Black Americans made up 50% of the victims of hate crimes in 2017 in LA County even though they compromise only 9% of county residents. The reputation of Boyle Heights is a deterrent to the turnout the over 20,000 Black people in the district who deserve representation.

Then came the retail politics of the election, where “I call shade”, to quote the 1990 documentary “Paris is Burning”.  Because this election is intra-party, the rules were not the same as a general election. Candidates could campaign to the voters onsite and make their case with the constituents directly.  The establishment and incumbent candidates were definitely given “top billing” on the real-estate where they were allowed to set up camp. I use the word allowed loosely because it was unclear to me who made these rules.  While this was my first time engaging in this process, I was vocal in challenging these unspoken rules. Then, there was the somewhat chaotic process of the candidate speeches. Each candidate was given one minute to present their case to the audience. Despite “Ordinary Citizen” being, arguably, the most energized and dynamic and visibly purple-branded speakers of the candidates who spoke, the speeches were abruptly “ended” before all the candidates had the chance to speak.  The moderator did re-open the speaking floor, but by this time the casual chaos had moved the voters’ attention away from the speaking floor entirely. It became clear to me that being a passionate, dynamic speaker was not enough to make dissenting voices heard above the background noise of the body politic. 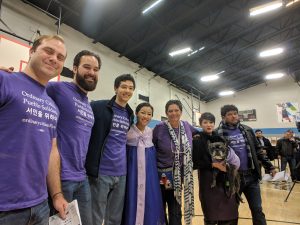 Despite these barriers, Jasmyne Cannick showed up; worked the waiting lines of voters; and made her case directly to the individual voters. She was flanked by strong Black women like LaTisha Nixon, the mother of Gemmel Moore who was found dead at age 26 in Ed Buck’s home on July 27th, 2017. Ms. Nixon was strong, dynamic, and gracious when asking for voters to support the woman who worked tirelessly on behalf of her son. Cannick’s coalition of multicultural, progressive voices was also speaking in solidarity of gay Black lives when working to turn out the vote and soliciting commitments from other candidates to denounce Ed Buck’s behavior and call for all of his contributions to be returned to causes benefiting gay Black lives. 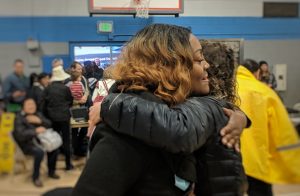 At the core of the growing case against Ed Buck is the silence that elected Democrats, like former California Democratic Party Chairman and Ed buck friend Eric Bauman, showed after Gemmel Moore’s death when Cannick stated and publicly tweeted “If another young, Black gay man overdoses or worse dies at Democratic donor Ed Buck’s apartment it’s going to be the fault of the sheriff’s dept and L.A. District Atty for not stopping him when they had the opportunity to”.  That warning went unheeded.

There were no charges filed against Buck for Gemmel’s death. 16 months later, 55-year-old Timothy Dean, another gay Black man, was found dead in Ed Buck’s apartment on January 7th.. days before yesterday’s election. The only voice who stayed with the story; who sat with the families of the slain; who was unafraid to advocate for the gay Black lives lost; who was their champion; and who went boldly to challenge the CA Democratic party’s deafening silence was Jasmyne Cannick. She was now armed with the slingshot in her arsenal against the ‘Goliath’ that is establishment California democratic party interests. 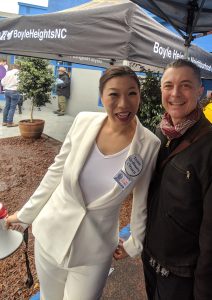 Unfortunately, Jasmyne failed her first bid to represent the 53rd District. None of the “Ordinary Citizen” slate would win their impassioned bid to challenge the CA Democratic Party. One thing became clear in this, the latest front on the fight for Black lives; the road will not be easy, and the struggle does continue.  There are still gay Black lives in Los Angeles and beyond that needed their stories and voices heard before they are lost. I’m reminded of Sky Young, another gay Black man allegedly killed at the hands of a Hollywood Walgreens security guard late last year. Jasmyne worked with his family to be sure charges were brought against his alleged killer. This is a small victory for accountability but it provides me with the hope that if we remain committed to the cause, we will bring about real change.

I am a pansexual Black man. I exist in the margins and gaps in our social consciousness of LGBT rights, and even in the greater Black Lives Matter movement. I’m grateful for all of the activists and allies who see that my life, even flawed, has intrinsic value and worth.  To the future Democratic party delegates, to the citizens who believe in the value of human life and dignity, I ask on behalf of #GemmelMoore #TimothyDean and #SkyYoung that you affirm that “Gay Black Lives Matter”.

JayBezz is an artist, activist, entrepreneur, and media contributor. He is an outspoken advocate working to amplify the voices of queer people of color in technology, politics, media, and pop culture. His freshman, self-produced 2008 studio EP “EVOLOVE” is available on iTunes. @JayBezzOfficial
FILM REVIEW: ‘AQUAMAN’ ASK THE EXPERT: DR. MOSSI SALIBIAN, BOARD CERTIFIED PLASTIC SURGEON