Californians Join Together to Share Their Love For Public Radio 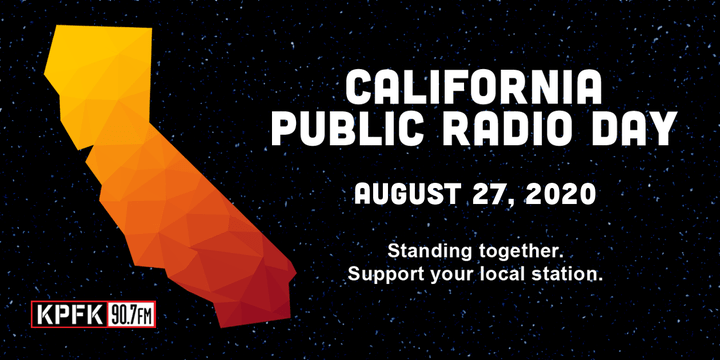 For the first time, on Thursday, August 27, 13 public radio stations across California will unite for the inaugural California Public Radio Day. It is apropos that KPFK, the crown jewel of public radio, is a critical part of this initiative during its 61st anniversary. The one-day fundraising campaign will create public awareness about the pivotal role and contributions of public radio and raise money for the non-profit stations.

In a joint statement, the participating organizations said: “At a time when our country is divided over so many issues, working with our fellow stations for California Public Radio Day is an opportunity for public media to lead by example and demonstrate the power that unity can bring to our communities, showing how our cohesive efforts can go so much further than those divided. For millions of listeners, California’s network of public radio stations is a daily source for fact-based news and information; a means of discovering their next favorite artist; a consistent melody of voices and music to underscore daily activities; and most importantly, a community they can trust. Public radio is not beholden to stockholders or corporate interests; it is accountable to the people. But without the support of our listeners, we could be at great risk. We hope Californians will join together with us to help boost this critical service and share their love for public radio.”

Anyel Fields, KPFK’s general manager told The Blunt Post, “KPFK is a part of The Pacifica Foundation that founded Public Radio in Berkeley, California. KPFK is proud to join fellow public broadcasters highlighting our service and the importance of listener support.”

Amid COVID-19, the Trump Administration’s war on media, and the November elections, public and independent media is more important than ever. A cornerstone of public radio is that it is free to all, yet what that means is that it relies on those who can afford to support this unique institution.

KPFK 90.7 FM celebrates its 61st anniversary this year. KPFK was established in July 1959, the second station the Pacifica foundation inaugurated and incorporated its roots in community radio. While for-profit and corporate media censor and cherry-pick the news for politics of respectability, KPFK goes beneath the surface to tell the whole story.

California Public Radio day kicks off a silent campaign to raise much-needed funds for the future and survival of KPFK.  These efforts are aimed at the least disruption to regular programming, while still impressing upon the audience the importance of donations to support KPFK’s programming and operations. KPFK is listener-sponsored, so the public is encouraged to support the station by making tax-deductible donations at KPFK.org.

Follow the campaign on social media with the hashtags #IlovePublicMedia + #CaliforniaPublicRadioDay

KPFK has been broadcasting since 1959 over 110,000 – Watts, the strongest signal west of the Mississippi. KPFK continues to produce the majority of programs in-house giving it the flexibility to provide a platform for stories, news, music, and information to serve the cultural welfare of the communities in and around Southern California that you will not hear anywhere else. KPFK believes forging social change is a fundamental part of how radio can make a positive impact on communities. For more information, please visit KPFK.org