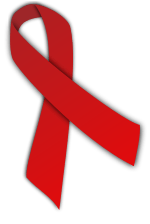 December 1st is World AIDS Day, the international day dedicated to raising awareness of the AIDS pandemic caused by the spread of HIV infection and mourning those who have died of the disease.

Since 1988, government and health officials, non-governmental organizations, and individuals around the world observe the day, often with education on AIDS prevention and control.

As of 2017, AIDS has killed between 28.9 million and 41.5 million people worldwide, and an estimated 36.7 million people are living with HIV, making it one of the most important global public health issues in recorded history. Thanks to recent improved access to antiretroviral treatment in many regions of the world, the death rate from AIDS epidemic has decreased since its peak in 2005 (1 million in 2016, compared to 1.9 million in 2005).

World AIDS Day was first conceived in August 1987 by James W. Bunn and Thomas Netter, two public information officers for the Global Programme on AIDS at the World Health Organization in Geneva, Switzerland. Bunn and Netter took their idea to Dr. Jonathan Mann, Director of the Global Programme on AIDS (now known as UNAIDS). Dr. Mann liked the concept, approved it, and agreed with the recommendation that the first observance of World AIDS Day should be on 1 December 1988. Bunn, a former television broadcast journalist from San Francisco, had recommended the date of 1 December that believing it would maximize coverage of World AIDS Day by western news media, sufficiently long following the US elections but before the Christmas holidays.

In its first two years, the theme of World AIDS Day focused on children and young people. While the choice of this theme was criticized at the time by some for ignoring the fact that people of all ages may become infected with HIV, the theme helped alleviate some of the stigma surrounding the disease and boost recognition of the problem as a family disease

World AIDS Day is an opportunity to show solidarity with the millions of people living with HIV worldwide. Most people do this by wearing an HIV awareness red ribbon on the day. You can also switch the profile photo of your social media handles to a red-ribbon picture.

“It is bad enough that people are dying of AIDS, but no one should die of ignorance.” Elizabeth Taylor

“The AIDS disease is caused by a virus, but the AIDS epidemic is not. The AIDS epidemic is fueled by stigma, by hate, by misinformation, by ignorance, by indifference. Science has accomplished miracles over the past 20 years, and science can now end this disease – but it cannot end the epidemic. We need more than medicine. We can do something about these things. We need to speak out about the changes we need to make in our society.” Elton John

“HIV does not make people dangerous to know, so you can shake their hands and give them a hug: Heaven knows they need it.” Princess Diana of Wales