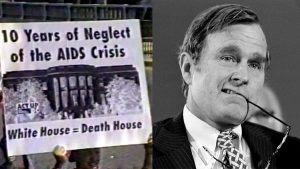 It’s natural for people to say, “Rest in Peace”, when someone dies; but revising history is an entirely different matter. It seems that some people suffer from amnesia or neglect to do research after President George Herbert Bush’s passing. They forget that he was the President who started the needless Gulf War in 1991. They also forget Bush administration’s hostility toward LGBTQIA Americans and gross failure to combat HIV and AIDS.

In 1992, ahead of the November election which Bill Clinton would win, he told the New York Times: “I can’t accept as normal life style people of the same sex being parents. I’m very sorry. And I believe in the traditional family values. And the best shot that a kid has is to have a mother and father that love that child, that will educate that child, that will care for that child. . . .But to glamorize life styles that are, in my view, not the normal life style, I don’t approve of that. I don’t want to censor it, but I don’t approve of it.”

Bush never once mentioned the word “gay” in presidential remarks. 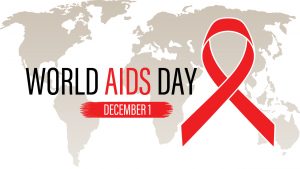 While the issue of same-sex marriage was not a focus of LGBT+ activists at the time of Bush’s presidency, Bush said in his audio diary that Americans “don’t want homosexual marriages codified.”

Towards the end of his presidency, Bush expressed harsher views on LGBT+ rights.

By the end of Bush’s presidency, there was only $135 million being spent for HIV efforts globally by US AID. Nobody was getting treatment for opportunistic infections — it was primarily being used for condom distribution. Not only did Bush allow the epidemic to rage to over 110,000 people here in the United States on his watch, but globally, there were over 1.5 million cases. There were also around a half a million cases being diagnosed every year, in an environment where the majority of AIDS cases were going undiagnosed, because there was no testing or collective reporting of AIDS deaths. The real number is thought to have probably been ten times what was reported, since there was so little funding and research to adequately report what was going on.

The immigration ban on HIV+ people wasn’t lifted until President Obama. There was supposed to be an international AIDS conference at Harvard in 1991, but it was moved out of the United States to Amsterdam because of the Immigration Ban — a law sponsored by Jesse Helms, an enemy of people with AIDS, and supported by President George H.W. Bush. Because HIV was a huge issue in Haiti, there was a HIV detention camp at Guantanamo Bay where many Haitian refugees were held.

President George Herbert Bush came around to a degree toward the end of his life regarding LGBTQIA Rights, but he was not a friend or even an ally as President.