Did Azerbaijanis Commit the Aghdam (Khojaly) Massacre Against their Own People?

Did Azerbaijanis Commit the Aghdam Massacre Against their Own People?

On 26 February 2022, Azerbaijan will commemorate 30 years since the Khojaly Massacre, one of the horrific events that took place during the First Nagorno-Karabakh War (1988-94).

Armenians should do the same, but not for the same reasons that Azerbaijan will.

The Khojaly Massacre of between 50 (first reported) and 200+ (later claimed by Baku) mainly Meskhetian Turk civilians on a frigid winter day has galvanised the Turkic world. Azerbaijan’s dictatorial government labels this war crime as a ‛genocide’. This conveniently obfuscates the world about who the aggressor was during the First Nagorno-Karabakh War – Azerbaijan.

Labelling the Massacre as a ‛genocide’ is undoubtedly a counter to the narrative about the WWI-era genocide against indigenous Christians, including Armenians. It has also helped to distract from the many pogroms of Armenians by colonizing Turks and Azeris over centuries.

Khojaly has featured extensively in Azerbaijan’s official propaganda to demonize Armenians, as part of a state-sponsored racism program. Much of the imagery involved wasn’t even taken at the Massacre site. But the misinformation doesn’t end there.

The Khojaly Massacre should be more accurately labelled the Aghdam Massacre, as this is near the actual site. However, Baku labels it as occurring in Khojaly, to implicate Armenians.

Azerbaijan has a terrible human rights record (ranked 129th for corruption and 168th in the world for press freedom), and is known for falsely portraying events for political purposes. For example, during the 2020 Nagorno Karabakh conflict and since, Azeris have committed many human rights abuses against ethnic Armenians such as beheadings, use of chemical weapons, and the killing and abuse of prisoners of war.

Azerbaijan prohibits Armenians based purely on their ethnicity, irrespective of citizenship.

Human Rights Watch (HRW) issued a statement dated 23 March 1997 that declared Armenians to be guilty of the Khojaly Massacre, without any supporting evidence to prove this allegation. Did HRW presume that no civilized people could murder their own, and therefore assumed that Armenians must have committed this terrible war crime?

If HRW is wrong, then an entity responsible for defending human rights has shamefully supported Azerbaijan, with its poor human rights record, to falsely demonize Armenians for decades. Thus, HRW is arguably culpable of being complicit in gross human rights abuses.

What does the Khojaly Massacre evidence reveal? Some of the most compelling testimony about the Massacre is from Czech reporter Dana Mazalová. She described her interaction with famous Azeri journalist Chingiz Mustafayev in the days following the event.

Mazalová’s lucid recollection provides vivid details of the killings in an area controlled by Azeri soldiers. She noted how the video shows that victims were shot in the knees, and then some scalped after death, with no Armenians present. She also stated that the Azeri authorities used the horrific scene of decomposing bodies as a propaganda event.

There are two critical points from an evidence perspective. First, it would have been virtually impossible for the victims to have been shot at knee level by Armenians kilometers away. Secondly, it is implausible that Armenians would be able to approach the site and disfigure the victims in an Azeri-controlled area, so this abuse must have been falsified.

Most tellingly, there’s little logic in creating a humanitarian corridor to enable those encircled to leave a conflict zone, but then killing them after they leave the Armenian- controlled areas. Azerbaijani writer Eynulla Fatullayev acknowledged the corridor, stating:

“The Corridor did exist, otherwise the residents of Khojaly, fully surrounded and isolated from the external world, would never be able to breach the circle and exit.”

Azerbaijanis were undoubtedly killed as a result of being in the middle of an active firefight between Azeri and Armenian forces (there were armed Azeris among the fleeing civilians). However, there is no credible evidence that Armenians systematically and deliberately targeted Azeri civilians within Armenian-controlled territory.

Mustafayev was so shaken by what he had seen – Azeri soldiers walking calmly around the bodies and later, victims that had been mutilated days after their deaths in an area controlled by Azerbaijan – that he later demanded answers from his government.

Mazalová noted that Mustafayev became very concerned about his well-being in Azerbaijan after that, mentioning that he might require ‛armor’ to walk in Baku. Chingiz Mustafayev died only weeks later on 15 June 1992, reportedly due to wounds sustained in battle.

The Russian Memorial Human Rights Centre reported that doctors on a hospital train at Aghdam reported at least four scalped bodies. One body had a severed head. Moreover, 10 people had died from blows with a blunt object. None of these murderous actions could have been perpetrated by Armenians, unless they controlled the Massacre site. Moreover, Azerbaijani soldiers have mutilated and beheaded victims on multiple occasions in the past.

Treatment of Captured Azerbaijanis by Armenians

Human rights abuse allegations must be examined on all sides. Armenians were reportedly responsible for some individual cases of wrongdoing. The Nagorno-Karabakh Republic’s Supreme Council expressed regret about cases of alleged cruelty during Khojaly’s capture.

A heightened sense of anger of people whose families had been killed in pogroms may have led some individuals to take matters into their own hands in acts of temporary insanity. Unfortunately, no attempts were made to investigate individual crimes related to the capture of Khojaly. These acts must not be condoned and should still be investigated.

There is conflicting testimony about whether the [approximately] 700 Azeris captured in and around Khojaly were well fed and given clothes or not. Ultimately, these people survived in Armenian captivity, and were later repatriated to Azerbaijani authorities.

Armenians had little food themselves, because Azerbaijani forces had earlier encircled the Nagorno-Karabakh capital Stepanakert, shelling it constantly from positions such as Khojaly. 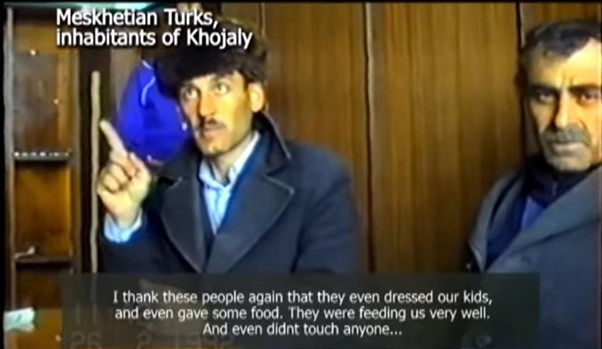 Noting that refugees passing through the humanitarian corridor split after passing the Karkar River (with some proceeding north to Aghdam and others east to the Massacre site near Shelli in the direction of Nakhijevanik), Eynulla Fatullayev noted:

“It seems like the battalions of [opposition-controlled] National Front of Azerbaijan [irregular forces] were striving not to liberate the civilians, but to get more blood on the way to overthrowing [Azerbaijani President] Ayaz Mutallibov.”

Further evidence indicates that Azerbaijani officials connected to the opposition sought to use this horrific event to depose their leader. In a television interview, Speaker of the Azerbaijani Parliament Yagub Mamedov stated that he was: “well aware of those who are to blame for the Khojaly tragedy. And he was not talking about the Armenian side”.

President Mutallibov blamed his political opponents for the killing of Khojaly victims near Aghdam. He later refuted this, but in Azerbaijan’s totalitarian society, this is unsurprising.

Azeri authorities under President Mutallibov who ultimately benefited from the Khojaly Massacre included Heydar Aliyev. He had been a senior operative of the KGB Soviet spy service. Aliyev then became leader of the Azerbaijan Soviet Socialist Republic (SSR) from 1969 to 1982, dominating Azerbaijan’s politics. In 1993 he took power in a coup.

Heydar Aliyev had boasted of his racist anti-Armenian policies, stating that:

“…I was attempting to change the demography there…. We moved Azerbaijanis there from surrounding areas. I was trying to have more Azerbaijanis in Nagorno-Karabakh, while the number of Armenians would go down.”

In 2003, Aliyev’s son Ilham Aliyev took over as President. He has remained firmly in power ever since, and made a nepotistic appointment of his wife Mehriban as Vice-President.

As noted by Mazalová, the Azerbaijanis used this event to disrupt the first attempt at a resolution of the war by diplomacy. Later they would use Khojaly to demonize Armenians as a people, with false claims not substantiated by evidence. There has never been a credible, open and independent investigation in Azerbaijan about what took place near Aghdam.

Azerbaijan wasn’t an internationally-recognized sovereign state until 26 December 1991. The former self-declared Azerbaijan Democratic Republic (1918-20) was never de jure recognized by any state, and the League of Nations rejected  its  membership  request  (note: the Paris Peace Conference recognized Azerbaijan as a de facto entity for the purposes of the Conference, but this did not constitute recognition of sovereignty).

‛territorial integrity’, as the Nagorno-Karabakh Autonomous Oblast had legally declared its independence under Article 72 of the Soviet Constitution, and the Azerbaijan SSR was only a province. United Nations Resolutions did not empower violence, and are not compulsory, as evidenced by UN Resolutions being ignored by Turkey since its 1974 invasion of Cyprus.

Armenians must tell the world what the evidence shows really happened to the innocent Khojaly victims. They should attend Khojaly memorials to remember the fallen as a visible signal of truth – that the world knows the perpetrators weren’t Armenian.

There was no justification for any brutal invasion and cruel war waged by Azerbaijani forces in Nagorno-Karabakh, which led to the consequent bloodshed at Aghdam.

The Khojaly [or rather, Aghdam] Massacre has also contributed to state-sponsored racist hatred by the Azerbaijani government, ultimately leading to the deaths of thousands of Armenians. Thus, Armenians have also been victims of the Massacre; a war crime that irrefutable and overwhelming evidence indicates was perpetrated by Azerbaijanis.

Australian/New Zealander Len Wicks has a background in aviation management, aviation safety audit and management, and tourism and international relations, having worked in NZ, Oman (during the 1st Gulf War) and Thailand (for the United Nations). He also has two patents and an active interest in renewable energy, with new designs for a Vertical Axis Wind Turbine and a green hydrogen system intended to decarbonize seawater. Mr. Wicks is now engaged by two states as a special advisor in aviation and special projects. In his private life, Mr. Wicks is a human rights activist focused on genocide awareness. He has built a residence in Armenia as a base for the charity he founded (Adopt-a-Village).
Icons Unite For a Great Cause: Charles Aznavour and Grand Hotel Yerevan Two Films from Vietnam, Kiều and Bố Già (Dad, I’m Sorry), Are 2022 Awards Season Frontrunners