There have been numerous films classified as legal dramas that effectively deal with the monumental and ongoing issues faced by people of color in the United States. These films provide a sobering reminder that despite the different periods, the pervasive and frightening element of racial inequities in our justice system has been a constant through-line. One of the great challenges when adapting a true story for the big screen, is walking the tight-rope of balancing the real-life events with the need to build dramatic tension and generate an emotional response.

Directed by Destin Daniel Cretton, Warner Bros Pictures JUST MERCY depicts the true story of young attorney Bryan Stevenson’s fight to appeal and overturn the false murder conviction of Walter “Johnny D” McMillian. Set in 1987, Stevenson (played by Michael B. Jordan) is a young idealistic lawyer fresh out of Harvard Law. Despite vocal opposition from his mother, Stevenson heads to Monroeville, Alabama, and teams up with local advocate, Eva Ansley (Brie Larson) to defend wrongfully convicted inmates on death row. Together they form the Equal Justice Initiative. While taking on numerous cases, the one that particularly captures Stevenson’s attention is that of Johnny D. McMillian (Jamie Foxx), a hardworking family man being railroaded for allegedly killing an 18-year-old girl. Despite all of the evidence pointing towards his innocence, the corrupt local law enforcement seeks to thwart Stevenson and McMillian at every turn. Together, Stevenson and the community work tirelessly to vindicate Johnny D in the face of endless threats, stonewalling and unapologetic systemic racism.

Despite the nuances and details about the story, Destin Daniel Cretton does an excellent job of pacing from beginning to end. The last half hour, in particular, does a solid job of concisely executing dramatic tension despite the period and numerous plot points that occur between the penultimate trial and the conclusion. The piece only comes close to feeling rushed in comparison to the steady feel of the earlier two-thirds of the movie but stops just short, ensuring that the viewer feels emotionally engaged in the resolution of these character arcs. Even with the details of this story being public knowledge, Cretton maintains suspense in the moments needed. However, what truly sustains the movie is the empathy it evokes for its characters and the rage one feels at the injustices occurring. While a few of the villains are written as one-note (despite solid performances), Cretton, a co-writer of the screenplay, delivers notable exceptions with some of the antagonists showing additional layers to their character. 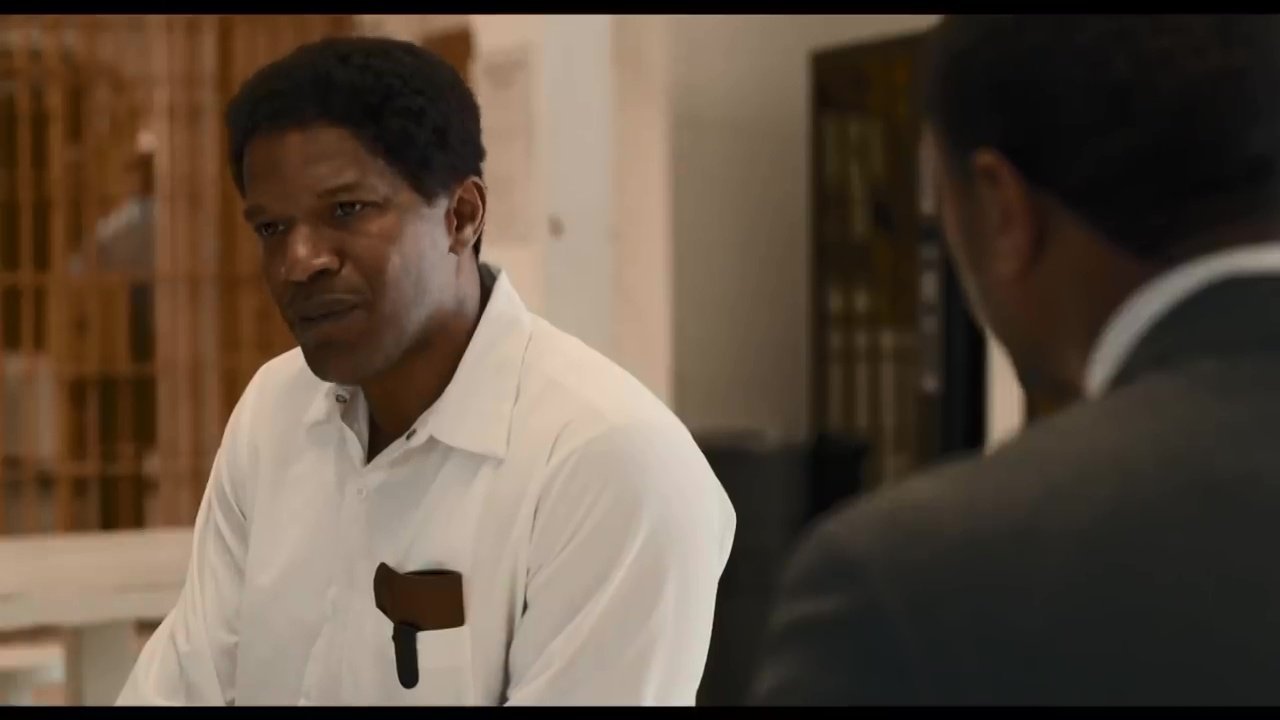 What truly augments what could run the risk of being predictable, albeit historically significant film, are the performances from the cast. Everyone is pulling their weight, but the two most notable standouts are Jamie Fox and Rob Morgan. Morgan plays Herbert Richardson, a Vietnam vet also on death row and suffering from PTSD. The real-life Richardson, who was unable to receive help for his mental illness before his crime, unintentionally caused the death of a young woman by planting a bomb on her porch while disoriented and confused. Morgan, in particular, has a scene-stealing moment in this film, where we see the character in his last moments up until his execution. Morgan’s acting is subtle, the choices are pitch-perfect, and the moments of pain and grief are impossible to shake after viewing. Additionally, Jamie Fox gives a moving and powerful performance as Johnny D. Though the physical transformation is minute at best, Fox disappears into the personality of his character, tugging at heartstrings during the exact moments in a way that is neither gratuitous or self-serving, but grounded and vulnerable. Brie Larson also gives a realistic and noteworthy performance as Eva Ansley. A departure from her past roles, this character is something we haven’t seen from Larson. Larson proves her Oscar-worthy capabilities by showing that she is more than capable of handling a role that typically might have been handed to a more seasoned character actress.

While none of the actors do a poor job, the weakest of the lineup is Michael B. Jordan’s portrayal of the protagonist, Bryan Stevenson. Jordan often shines in roles that allow him to exude his natural charisma and intensity. Admittedly while an obstacle might have been hard determining the appropriate characterization for this real-life figure, the dialogue and Jordan seem to rest uncomfortably with each other. It doesn’t feel like we are watching Jordan immersed in his character, but rather seeing him play a subtle and composed version of the characters we are accustomed to him portraying. That stated, he is more than capable of summoning emotional depth for the scenes necessary, and in particular, shines in the moments when required to convey great anger, passion or humor. He is undoubtedly a formidable talent and only pales in comparison to some of the powerhouse chops displayed by his fellow actors.

JUST MERCY is a well-directed, emotional and oftentimes, appropriately uncomfortable movie that does indeed deliver justice to this true story about perseverance and racial justice. Many of its actors will undoubtedly be considered for the upcoming awards season, in particular, Jamie Foxx, Rob Morgan, and Brie Larson. The film earns a solid A for its character work, pacing, and execution of the plot, even while hitting all of the usual beats associated with this particular genre. The movie is scheduled for a wide release on January 10, 2020.